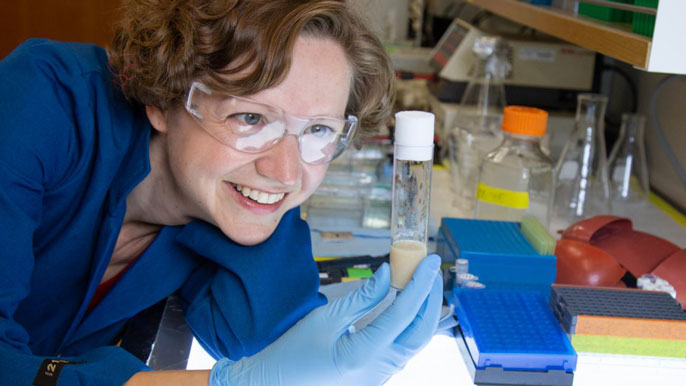 Pew Charitable Trusts has announced Kassandra Ori-McKenney as a 2018 Pew biomedical scholar, one of the most prestigious honors of its kind.

Eight promising early-career faculty from across the UC system have been named 2018 Pew biomedical scholars, a prestigious honor that comes with multiyear grant funding to advance research into the biological mechanisms underpinning human health and disease.

Pew selected 22 early-career faculty from a field of 184 nominees for its 2018 class of biomedical scholars. Recipients receive a four-year, $300,000 grant to advance their research. UC scholars accounted for more than a third of the honorees, with faculty from UC Davis, UCLA, UC Merced, UCSF, UC San Diego and UC Santa Cruz represented.

“These scientists have shown the boldness and creativity that drives great discoveries, and Pew’s unrestricted support will help them follow the facts wherever they lead,” said Rebecca Rimel, president and CEO of The Pew Charitable Trusts. “We’re proud to invest in this gifted group at a pivotal stage in their careers when funds to pursue new concepts and methods can be scarce.”

The Pew Charitable Trusts also announced its 10 new Latin American fellows, tapping three biomedical scientists to receive funding to support their postdoctoral training at UC Berkeley and UC San Diego. Each fellow will receive two years of funding for their UC studies. After the fellowship, Pew provides additional funding to awardees who return to Latin America to launch their own labs.

“These young Pew fellows hold great promise not only as innovative scientists, but also as the next generation of leaders at research institutions throughout Latin America,” said Eva Nogales, Ph.D., professor in the Department of Biochemistry and Molecular Biology at UC Berkeley and incoming chair of the program’s national advisory committee.

Anna E. Beaudin, UC Merced
Beaudin will investigate how maternal inflammation during pregnancy alters the risk for autoimmune disorders of offspring across their lifespan.

Angela N. Brooks, UC Santa Cruz
Brooks will investigate how RNA is processed to produce functional proteins, and the result when this processing mechanism becomes dysregulated.

Matthew D. Daugherty, UC San Diego
Daugherty will explore how organisms evolve resistance to infections and how pathogens can subvert those defenses.

Enfu Hui, UC San Diego
Hui will research the ways the immune system can be used to fight cancers.

Aashish Manglik, UCSF
Manglik will study how information is conveyed by the Hedgehog signaling cascade, a key pathway in fetal development and cancer development.

Hosea Nelson, UCLA
Nelson will develop artificial systems that can catalyze chemical reactions inside cells as a response to a particular gene becoming active.

Kassandra Ori-McKenney, UC Davis
Ori-McKenney will investigate the molecular events and proteins driving the development of dementia after a traumatic brain injury.

José A. Rodriguez, UCLA
Rodriguez will study the structure of toxic prion aggregates, a form of infectious protein that causes neurodegenerative disorders such as Creutzfeldt-Jakob disease.

Diego Alvarez, UC San Diego
Alvarez will study the molecular and genetic mechanisms that guide the development of visual circuits after birth.

Francesca Burgos, UC Berkeley
Burgos will examine how linear RNA molecules fold into a specific three-dimensional shape as they are being made.