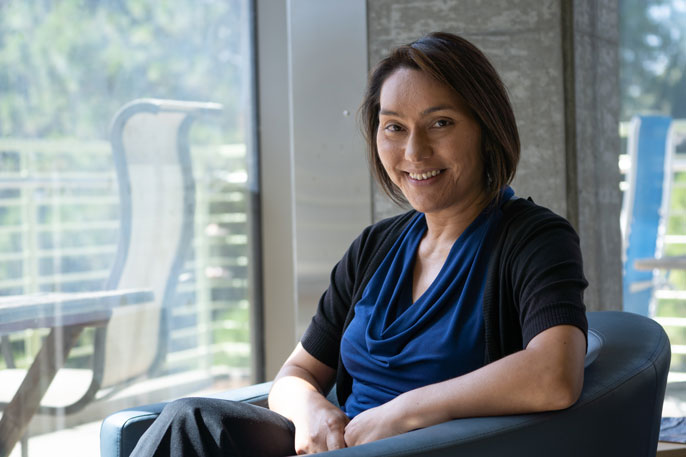 The next time you look up at the moon, try to imagine the cosmic event that created it.

UC Davis planetary scientist Sarah Stewart has made a career out of doing just that, work which has now won her a coveted MacArthur Foundation fellowship — often referred to as a “genius” grant — for developing a revolutionary new theory about the origins of the Earth and moon.

Five UC people, including Stewart, earned the prestigious fellowships this year, which offer a $625,000 grant that each recipient may use however they wish. The MacArthur Foundation selected Stewart and the other 2018 fellows for showing exceptional creativity and accomplishment in their fields, and their promise in terms of important future advances.

Stewart is on track to change our thinking about how planets and other celestial objects form. Before she put forth her theory about the creation of the moon, most scientists held the view that it was stripped out of the Earth when another planet-sized object struck our planet with a glancing blow. But this giant impact model couldn’t explain key observations, such as the surprising similarities between Earth rocks and lunar rock samples collected by Apollo astronauts.

After conducting simulations of massive collisions in space, Stewart and graduate student Simon Lock proposed that the Earth and moon formed from an entirely new kind of celestial object, a gigantic spinning donut of vaporized and molten rock that they call a synestia. They showed how a synestia could be created from a high-energy collision between two planet-sized objects with high angular momentum. Their theory can explain some of the puzzling observations about our closest neighbor.

“It’s fitting that this prestigious no-strings-attached award goes to professor Stewart because her curiosity and ingenuity know no bounds,” said UC Davis Chancellor Gary S. May. “I am thrilled for the recognition this brings to her and our university community as a whole.”

Stewart simulates planetary collisions in her lab by using two large indoor cannons to fire rocks and minerals at speeds of up to 15,000 miles per hour and study what happens. More people would likely go into the sciences if they knew that jobs like that existed.

She hasn’t decided yet what new project she will tackle with her MacArthur award, but says she wants to it be something “new and different.”

“I want to use it to enable something exciting that I haven’t had a chance to do yet,” Stewart said.

The other four University of California recipients are:

A 1980 UC Berkeley alum, Estrin was honored for her work as a computer scientist. She is known for creating open source applications and platforms that leverage mobile computing devices and network services to address socio-technological challenges, such as personal health management. Read more on her MacArthur citation.

The 1998 UCLA graduate is a community organizer who co-founded Silicon Valley De-Bug. It started in 2001 as a magazine about issues affecting low-wage manufacturing and temporary workers, and evolved into an online space for community organizing, social justice advocacy and multimedia storytelling, according to his MacArthur citation. De-Bug’s most notable initiative is the Albert Cobarrubias Justice Project, and its “participatory defense” model, which brings community members together to help families navigate the criminal justice system and to enable chronically under-resourced public defenders to more effectively defend their clients.

Sly is a mathematician and probability theorist whose work focuses on resolving longstanding open problems in statistical physics and theoretical computer science, according to his MacArthur citation. Now a mathematics professor at Princeton, Sly earned his Ph.D. in statistics at Berkeley in 2009 and served on the statistics faculty at UC Berkeley from 2011-2016.

Tsang, who earned a 2010 MFA from UCLA, is a filmmaker and performance artist who combines documentary and narrative techniques with fantastical detours into the imaginary in works that explore hidden histories, marginalized narratives and the act of performing itself. Tsang reimagines racialized, gendered representations beyond the visible frame to encompass the multiple and shifting perspectives through which we experience the social realm. Read Tsang’s full MacArthur citation.