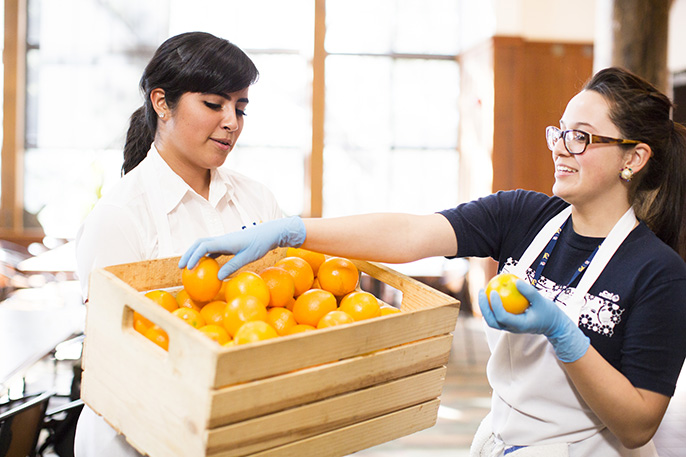 The UC Global Food Initiative is off to a fast start as faculty, students and staff from across the 10-campus UC system focus their collective power on food issues.

In its first year, the University of California’s Global Food Initiative launched food security efforts on every campus, held statewide conferences on sustainable fisheries and food justice, and appointed more than 50 student fellows to pursue projects.

That is just a taste of the work underway as faculty, students and staff from across the 10-campus UC system focus their collective power on food issues.

The Global Food Initiative has been a galvanizing force for bringing people together in new collaborative efforts, said UCLA’s Wendy Slusser, who serves on one of the initiative’s two dozen systemwide subcommittees.

“It’s been a lightning bolt of energy that helps pull people together,” she said.

UC President Janet Napolitano first launched the Global Food Initiative on July 1, 2014. She spanned the state that day, meeting with Alice Waters at the Edible Schoolyard in Berkeley, the California State Board of Food and Agriculture in Sacramento, and UCLA students and campus leaders at their community garden in the Sunset Canyon Recreation Center.

The announcement was met with enthusiasm — and a bit of wonder at the audacity of the undertaking — as Napolitano and UC’s 10 chancellors declared that UC would harness its people and power to put the university, state and world on a path to sustainably and nutritiously feed themselves.

A year later, the initiative is off to a fast start. All 10 UC campuses, UC’s Division of Agriculture and Natural Resources, and Lawrence Berkeley National Laboratory have pitched in, building on existing efforts and creating new collaborations to develop, demonstrate and export solutions for food security, health and sustainability.

“The strength of the Global Food Initiative is its capacity to harness the resources and talents and energy around each of the UC campuses related to food in its broadest sense,” said Slusser, associate vice provost for the UCLA Healthy Campus Initiative. “The structure has allowed each campus to identify what it wanted to do, build on its strengths and learn from what the other campuses are doing.”

Napolitano has welcomed campus ideas, Slusser said. GFI is helping sponsor a UCLA food studies and food justice course/internship this summer for 20 undergraduate students. The course, which had a waiting list, will be offered again in the fall and next summer and could become a pilot for other UC campuses.

Slusser also praised the UC President’s Global Food Initiative Student Fellowship Program. She will attend a July 20 symposium for GFI and Carbon Neutrality Initiative student fellows, noting that two UCLA fellows told her they now want careers in food. “They had never even considered it before,” Slusser said.

Laura Schmidt, a UC San Francisco professor of health policy and lead investigator on the UCSF-led SugarScience initiative, serves on a GFI subcommittee that is organizing a workshop July 20 on leveraging research for food and agriculture policy change. The workshop will provide training on tools and ways that faculty members can interact with policy issues and policymakers.

“We have so much knowledge about health locked up in the ivory tower,” Schmidt said. “My role is to get information from scientific researchers into the hands of decision-makers and people who can move the dial on health. When the Global Food Initiative came along, it was, ‘Yes, I want to be a part of this.’ The president is trying to get science out into the real world so it can have a positive impact on health.”

By providing policymakers with evidence-based information, UC researchers can help them address such problems as obesity and other chronic diseases, said Schmidt, who worked with supervisors on San Francisco’s first-in-nation warning labels on sugary beverages. UC also can lead by example, she said, citing UCSF’s new Healthy Beverage Initiative that phases out the sale of sugar-sweetened beverages at UCSF.

The Global Food Initiative’s challenge is how to build on its momentum and create the infrastructure so that it sticks, she said.

“The food initiative spans agriculture, the environment and human health. That is really important. These issues intersect and overlap in powerful ways,” Schmidt said. “I think it was brilliant to bring this together.”

Here are some highlights of the Global Food Initiative’s top accomplishments in its first year: