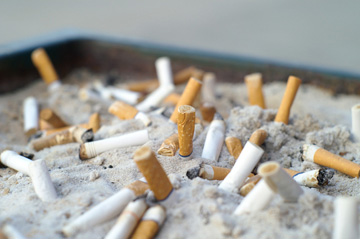 University of California campuses across the state will be tobacco free come the New Year, demonstrating UC's commitment to provide a healthy environment for faculty, staff, students and visitors.

A leader in strong health care practices, UC already bans smoking at its five medical centers. The new tobacco-free policy that begins in January 2014 goes a step further by extending the ban to all campuses and anywhere on campus, including residence halls and parking lots, and also by prohibiting the sale and advertising of tobacco products.

"Tobacco use and secondhand smoke continue to be the leading causes of preventable death in the country," said Cheryl Lloyd, interim director of Risk Services at UC's Office of the President, which is leading the effort. "We can do our part to help change that by providing a smoke-free environment on our campuses so our employees, students and visitors aren't exposed to something that damages their health."

Enforcement will rely primarily on educating smokers about the dangers of lighting up and other types of tobacco use, and promoting campus resources to help them quit.

Faculty and staff who want to quit smoking can access many resources through any UC-sponsored 2014 medical plan. All the 2014 plans will offer prescription nicotine replacement therapies, such as nicotine inhalers and sprays, at no cost when prescribed by a doctor. Over-the-counter nicotine replacement therapies, such as nicotine patches and gum, when prescribed by a doctor, will be available at the generic copay price for those enrolled in UC Care, Health Net Blue and Gold and Western Health Advantage. Kaiser members have no copay. Under Core and the Blue Shield Health Savings Plan, these will be subject to the deductible and co-insurance.

UCLA was the first UC academic campus to go tobacco free, kicking off the new policy on Earth Day, April 22. Banners and signs declaring UCLA tobacco free pepper the campus. Wallet-size informational cards are given to smokers to remind them of the policy and available resources to help them quit.

Because the medical center sits inside the academic campus boundaries, UCLA sees a large number of new visitors every day — a challenge when it comes to keeping people educated about the new policy.

Nevertheless, Michael Ong, co-chair of UCLA's Tobacco-Free Task Force, said there's been a noticeable decline in smoking around campus, and a survey of cigarette butts collected in hot-spot areas indicates that people are following the new policy. The Institute of the Environment and Sustainability, which conducted biweekly counts before and after the policy was implemented, found that the number of butts in hot-spot areas dropped from an average of 600 to 160.

While smoking has declined, Ong said that reaching 100 percent compliance with the new policy will take time. Tobacco users may struggle with stopping tobacco use on campus or quitting smoking due to nicotine's addictive qualities. Ong said the task force is working on reinforcing for these continuing users how to comply with the new policy and resources that can help with cessation.

Studies find low success rates for those who try to quit smoking without support or the medications that relieve withdrawal symptoms, she said. Only three to five out of 100 people will still be smoke-free a year after going cold turkey, studies show, and it often takes five to six attempts before people are able to fully quit.

The campus has partnered with Los Angeles County Department of Public Health to offer a free two-week supply of nicotine patches to faculty, staff and students who want to quit. This is in addition to the resources available through UC-sponsored medical plans.

More than 1,100 other colleges and universities across the country have banned smoking on their campuses, including in residence halls.