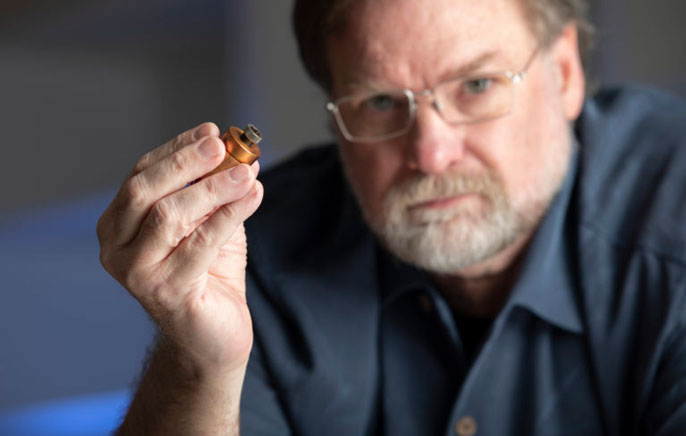 Chris Barty, UC Irvine distinguished professor of physics & astronomy, is leading a team working to develop a way to halve the wavelength of photons emitted by Blu-ray diodes — which is around 405 nanometers — to the germicidal UV-C band, which poses minimal risk to humans.

A new weapon in the arsenal against the coronavirus may be sitting in your home entertainment console. A team led by physicist Chris Barty of the University of California, Irvine is researching the use of diodes from Blu-ray digital video disc devices as deep-ultraviolet laser photon sources to rapidly disinfect surfaces and the indoor air that swirls around us.

Barty, UC Irvine distinguished professor of physics & astronomy, said that such UV light sterilizers would be cheap compared to current medical- and scientific-grade systems and that it’d be possible to deploy them almost anywhere.

“If these sources are successful, I think you could build them into a mask and clean the air that’s coming in and out of you,” he said. “Or you could set these things up in the air circulation ducts of major buildings, and the airflow that goes through could be sterilized.”

They could also function in hand-held wand devices, Barty said, or as a “light curtain” through which people walk as they enter a room, exposing them to UV-C radiation. He noted that at this wavelength — between 200 and 260 nanometers — UV radiation will destroy viruses and other pathogens but poses minimal risk to humans.

“There is evidence to suggest that the UV-C band is actually not an issue for us, especially at the shorter wavelengths, because it gets absorbed by dead skin cells or by a teardrop on your eye,” said Barty, head of UC Irvine’s Convergent Optical Sciences Initiative.

“Hospitals use UV-emitting robots that are about the size of a dorm room refrigerator. They just wheel them in and plug them into the wall to sterilize the place, but everybody has to leave because in addition to UV-C, they make a lot of UV-A and UV-B, which can cause harm to humans.”

The cost of these roaming hospital sterilizers — that are based on high-current mercury discharge lamps — is too high for deployment at the scale that may be needed to combat the coronavirus, present everywhere from cruise ships to meatpacking plants. Barty said that Blu-ray diode lasers offer a potential path to a compact, economical solution, since the technology is ubiquitous and priced in the range of tens of dollars per unit.

His team is developing a way to halve the wavelength of photons emitted by Blu-ray diodes — which is around 405 nanometers — to the germicidal UV-C band.

“This is really more of an applied physics versus a pure physics view of the world,” he said. “The issue is not whether you can make UV-C light. It’s whether you can fundamentally reduce the dollar-per-watt output of a device to a place that it becomes compelling to use UV-C light.”

According to Barty, Blu-ray sterilizers could be made in the “same kind of quantities as you can make other telecommunications components, so you could really change the game.”

Looking at the current landscape, in which there’s an all-hands-on-deck effort to develop vaccines to prevent COVID-19 infections and drugs to treat people sick with the virus, Barty observed: “I would prefer that we just destroy it.”

This project and many other currently active UC Irvine-based initiatives to confront the coronavirus are being tracked at https://oc-covid19.org.