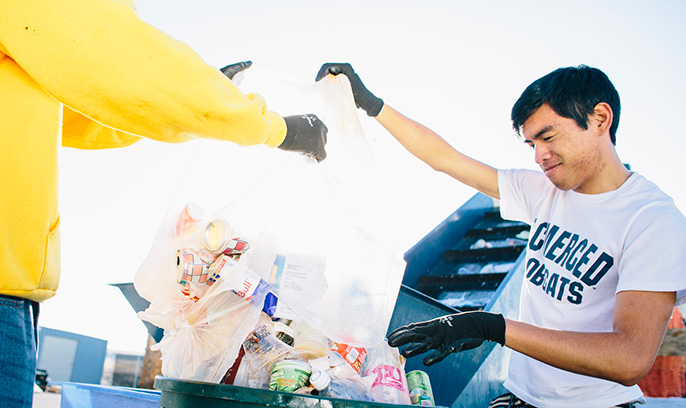 As part of its White House American Campuses Act on Climate pledge, UC committed to:

For more details, see the full text of UC’s climate pledge and the White House fact sheet on the American Campus Act on Climate Pledge.

University of California President Janet Napolitano, together with chancellors from all 10 UC campuses, joined the White House and universities around the country today in urging the world's leaders to take decisive action on climate change.

In signing the White House American Campuses Act on Climate Pledge, UC joined over 200 US colleges and universities ­— representing more than 3.3 million students — in a unified commitment to combat climate change.

The pledge, part of the first White House American Campuses Act on Climate day-of-action, seeks to amplify the voice of the higher education community across the U.S. and the important role it can play in the transition to a sustainable, carbon-neutral future.

The pledge urges world leaders to produce an ambitious agreement to combat climate change at the upcoming COP-21 United Nations Climate Conference in Paris, but is also a commitment to take local action, no matter what happens at the Paris talks. Pledge signers agreed to accelerate their transition to low-carbon energy while promoting sustainable practices across their campuses.

“Addressing these challenges, and reducing our carbon footprint, is a moral imperative,” Napolitano said in addressing the UC Carbon and Climate Neutrality Summit in San Diego last month.

For UC, there was no impediment to signing the White House’s pledge: The university already has independently committed to climate change and sustainability measures that go well beyond the promises in the pledge. By 2025, UC is committed to emitting zero net greenhouse gases, becoming the first major university system to achieve carbon neutrality, and has pledged to invest at least $1 billion of the university’s endowment and pension funds over the next five years in solutions to global climate change, as part of the White House’s Clean Energy Investment Initiative.