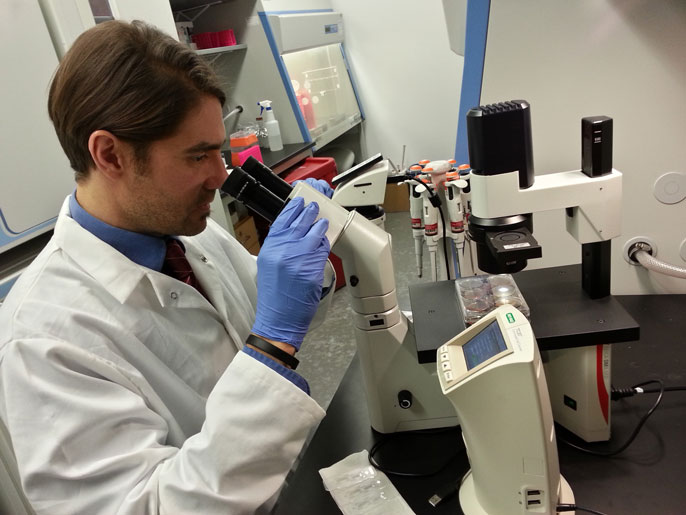 Less than a year after mapping the genetic landscape of melanoma, a researcher from the University of California, Merced, has identified a drug that could be effective in battling the deadly skin cancer.

UC Merced Professor Fabian V. Filipp led a team of researchers on the new project, the results of which were published today (Feb. 29) in the journal Neoplasia.

Filipp’s previous study used data from The Cancer Genome Atlas — which includes DNA sequences from 471 melanoma patients and more than 12,000 cancer genomes — to find patterns of genetic changes that give rise to melanoma tumors.

In their new study, Filipp and his team used that same data set to identify a genetic mutation — specifically, the activation or amplification of the gene EZH2 — that silences not only genes that suppress tumor generation, but also cell surface molecules that help the immune system recognize tumors.

Lab work then showed that a drug known to inhibit EZH2 can have downstream impacts that are beneficial to a substantial portion of melanoma patients.

"The future of cancer research is here"

“We found that the EZH2 gene was activated in about every fifth melanoma genome,” Filipp said. “Our research indicates that inhibition of EZH2 is a promising therapeutic avenue for those patients.”

The next step will be to test the EZH2 inhibitor drug, known as GSK126, in clinical trials to positively confirm any therapeutic effects, Filipp said. If successful, Filipp and his team will have made a major step toward a better understanding of cancer and how to treat it.

The availability of big genomic data — and the development of systems biology tools to quickly analyze responses in biological networks — is providing new avenues for the rapid progress of cancer research and personalized medicine. Filipp’s methods could be used to identify genetic mutations related to other types of cancer, and then to find drugs that work against those mutations and prevent or inhibit tumor development.

“The future of cancer research is here,” Filipp said. “In time, it’s possible that doctors will be able to scan a patient’s DNA and quickly identify both the specific type of cancer the person has developed and the best drugs to fight it.”

Filipp’s co-authors on the study were melanoma experts Jessamy Tiffen, Stuart J. Gallagher and Peter Hersey, from the Centenary Institute at the University of Sydney in Australia, and UC Merced graduate student Stephen Wilson. Tiffen and Gallagher visited UC Merced in November for a day of meetings and lectures.

Filipp, an affiliate of UC Merced’s School of Natural Sciences and Health Sciences Research Institute, recently received the 2016 Medrano Young Investigator Award from the PanAmerican Society for Pigment Cell Research for his accomplishments in research on melanoma biology, the strength of his research program and his impact as a role model and mentor.