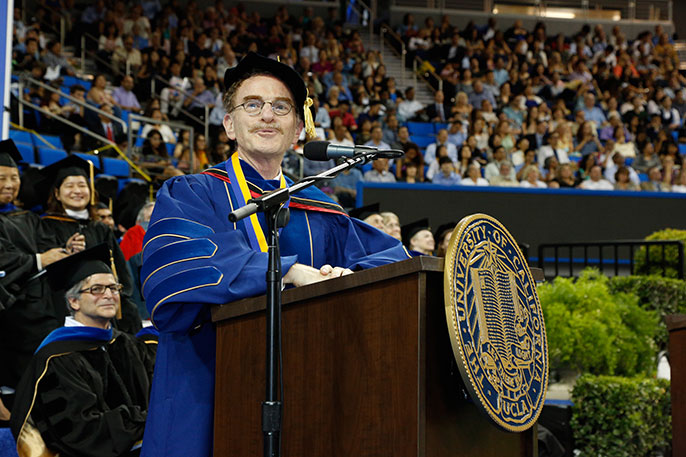 People tend to perk up and listen when UC Berkeley professor Randy Schekman speaks. It’s one of the benefits of winning a Nobel prize.

Schekman has vowed to use the celebrity from winning the 2013 Nobel for medicine to speak up for public universities. Whenever he gets a chance, he recounts his middle-class upbringing and the significance to his career of the public education he received at the University of California.

“Having had the benefit of the University of California for my formative years, I feel it’s absolutely crucial that places like Berkeley flourish,” Schekman said. “I’m certain that without public higher education there would be many fewer great scientists in this country.”

UC affiliated faculty and researchers have won 61 Nobel prizes over the years, starting with Ernest O. Lawrence, who in 1939 won the prize in physics for inventing the cyclotron, the predecessor to today's particle accelerators.

Lawrence, who is the namesake for both Berkeley and Livermore national laboratories, is often considered the father of "big science" that ushered in the era of multidisciplinary research involving large teams of scientists and engineers working together.

Schekman, UC's most recent Nobel winner, earned his bachelor's degree from UCLA and his doctorate from UC Berkeley, where he is a professor of molecular and cell biology. He shared the Nobel for his role in revealing the machinery that regulates the transport and secretion of proteins in our cells, research that led to a new class of treatments for diabetes and hepatitis B.

“Mine is only the latest example of many where undirected basic science and public investment in that science leads directly to an application of tremendous value,” Schekman said.

Like Schekman, many other UC Nobel laureates were feted for basic research that paved the way for even greater breakthroughs.

UC Berkeley's Yuan T. Lee shared the 1986 chemistry Nobel for work in the dynamics of chemical elementary processes. The development created a new field called reaction dynamics that contributed to a greater understanding of chemical reactions.

Francis Crick, who worked later in his career at UC San Diego, shared the 1962 prize for identifying the double-helix structure of DNA, which opened the door to genetics and molecular biology research that has helped to unlock evolutionary secrets to life and our understanding of a host of diseases.

Blackburn shared the prize for the discovery of an enzyme called telomerase that plays a key role in normal cell function, as well as in cell aging and most cancers. Yamanaka won for discovering how to manipulate the genetic code of ordinary adult skin cells to transform them into cells that, like embryonic stem cells, are capable of developing into any cell in the human body.

Outside of the hard sciences, UC scholars have won 10 economic sciences prizes and one in literature.

Most recently, Lloyd Shapley of UCLA won the 2012 economics Nobel for helping devise “the theory of stable allocations and the practice of market design.” He is considered one of the founders of game theory.

A common thread among the discoveries is that they all contributed to the public good and furthered, in far-reaching ways, our understanding of the world and how it works.

Schekman, a keynote speaker at UCLA’s 2014 commencement, told the new graduates that public commodities like UC are threatened and urged them to advocate for more support for public higher education.

“We owe it to our families, to our younger brothers and sisters, to our children and grandchildren to reverse this trend so that members of future generations will have access to the same outstanding UC education that you and I have enjoyed,” he said.