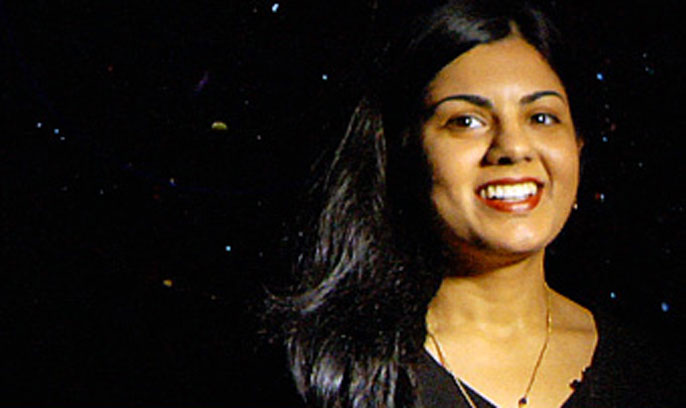 Sukanya Chakrabarti, a current fellow researching the evolution of galaxies in the astronomy department at UC Berkeley.

A walk in the woods around Lake Arrowhead helped Wayne Yang solve a major career conundrum: whether to accept a coveted tenure-track faculty position at UC San Diego. Yang strolled in the forest with Sheila O'Rourke, director of the UC President's Postdoctoral Fellowship Program, which he was about to finish. O'Rourke's advice helped Yang decide the job was right for him.

With a doctorate in social and cultural studies in education from UC Berkeley in 2004, Yang hesitated about joining the ethnic studies department at UC San Diego because he was afraid it would pull him away from the community work he'd done, including co-founding a charter school, in 15 years as a high school teacher. Along with advice from O'Rourke, Yang sought counsel from the mentors and the network he'd built through the fellowship program and realized he could combine scholarship with his community interests.

"I probably wouldn't be a professor if it wasn't for the fellowship," said Yang, an assistant professor at UC San Diego since 2006.

The UC President's Postdoctoral Fellowship Program, open to postdocs of any race and gender, reaches out to doctorate recipients whose teaching, research and service contribute to diversity. The program encourages them to pursue academic careers by providing research funding, mentoring and networking opportunities. UC's annual report on diversity cited the program as one of the ways campuses can develop a more diverse faculty. UC Regents made achieving diversity among students, staff and faculty a policy goal in 2007.

UC's ladder-rank faculty members are more diverse than the faculty at the public and private universities who make up the elite Association of American Universities, according to the diversity accountability report. And, in a few disciplines, the proportion of underrepresented faculty exceeded the estimated percentage of available underrepresented candidates from the national pool. Yet white men still account for the majority of faculty at all UC campuses. The fellowship program seeks to change those statistics.

"These are scholars who bring critical skills on how to be a more diverse and inclusive University of California," O'Rourke said of UC President's fellows. "They understand the needs of minority students. Many of them have worked in minority or with minority communities, so they are fluent in those issues."

UC fellows, who can be of any race or gender, receive research suppport, professional development and faculty mentoring. The program offers 15 to 20 fellowships a year. From 2001 through 2006, more than 75 percent of fellows received tenure-track positions, and UC campuses hired more than 40 percent. Since 2003, the UC Office of the President has provided a partial salary supplement for five years to UC campuses that appoint current or former fellows to ladder-rank faculty positions. Overall, 77 former fellows have been hired by a UC campus since 2003.

"We have found the president's postdoctoral fellows to be an excellent source of diverse candidates — particularly in the humanities and social sciences," said Barbara Horwitz, vice provost for academic personnel at UC Davis, which has hired 17 former fellows, tying UCLA for the most of any UC campus. "Overall, the concept is good, and we have taken advantage of the program."

O'Rourke said enhancing faculty diversity may become more difficult as budget cuts curtail hiring, but programs such as this are "more important than ever if we're going to be relevant to the state of California."

"If we're going to have any credibility with the state and serve the needs of the people, we have to address diversity," she said.

The UC President's Postdoctoral Fellowship Program began in 1984 and is one of the pioneering programs designed to foster diversity in academia. UC's program is an ideal format for any kind of postdoctoral fellowship, said Alberto Roca, a former UC fellow and the editor and founder ofMinoritypostdoc.org, an information site for postdoctoral diversity issues and opportunities.

"UC is setting the model for the design as well as the purpose of a postdoc fellowship," said Roca.

While most postdoc fellowships provide a source of funding for research, many diversity programs such as UC's also emphasize networking and mentoring, allowing people who are in a position to hire to see candidates and judge "intangibles that don't necessarily come across in a CV," Roca said.

"Diversity postdocs have become a model for what could be done for other fellowships," Roca said.

During their UC fellowship, the relationships that are cultivated and the mentoring received on research methods, interviewing for jobs and putting together a curriculum vitae went a long way in getting them ready for faculty positions, former fellows said.

"This fellowship really helps postdocs get those skills that they need to advance in academia," said Sukanya Chakrabarti, a current fellow researching the evolution of galaxies in the astronomy department at UC Berkeley (see video).

Particularly helpful are the twice a year events where UC professors, many of whom are former fellows, are invited back to mentor current fellows.

"Learning how the UC system works from people who are there was a huge advantage," said former fellow Rudy Ortiz, who joined UC Merced in 2005 as a founding faculty member and is an assistant professor of natural sciences.

The research itself also helps participants land a faculty appointment, said Adah Almutairi, a former fellow who is an assistant professor in the pharmaceutical sciences and materials science and engineering departments at UC San Diego.

"With that research in hand I was able to apply for jobs," said Almutairi, who joined UC San Diego in 2008 and recently won a National Institutes of Health New Innovator Award. "I got several offers. But I fought hard to stay in UC."