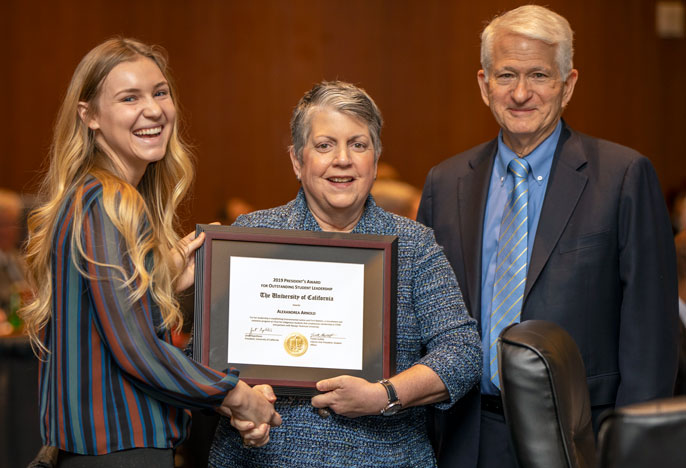 “Student activism and public service have been a hallmark of the University of California and its students for 150 years,” Napolitano said. “This year’s winners represent the best of that tradition.”

Napolitano presented plaques to the recipients during a meeting of the UC Board of Regents.

Arnold, a graduate student studying climate science at UCLA, has been instrumental in the creation of Environmental Justice and First Nations, and developed an inclusive academic collaboration with Navajo Technical University. She has also taken an active role in UCLA’s Center for Diverse Leadership in Science, as well as the Organization for Cultural Diversity in Science at UCLA.

Partika, a fourth-year environmental chemistry major, has been building an anaerobic digester, which works to turn food waste into fertilizer and biogas, on the UC San Diego campus.

Over the course of the academic year, her team collected more than 41,000 pounds of food waste, succeeding in sequestering the equivalent of 6,637 pounds of carbon dioxide. She was recently awarded a 2019 Lemelson-MIT Student Prize for her work.