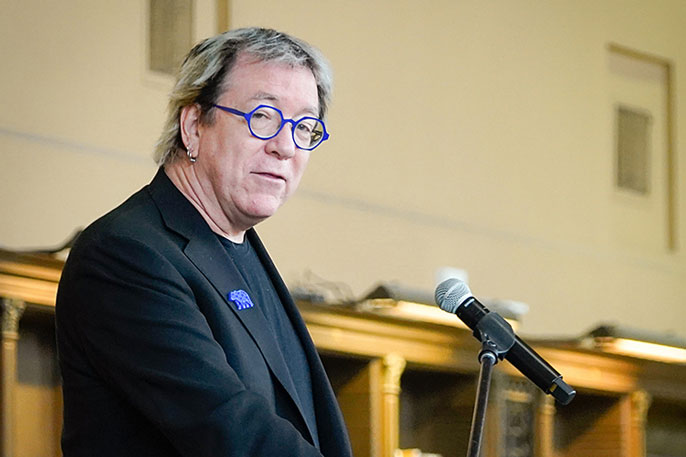 “Ultimately,” says University Librarian Jeffrey MacKie-Mason, “we’re trying to make this a standard way of doing business, so that all agreements are open access, and all scholarly publishers will stop selling subscriptions.”

Today, the University of California announced a landmark, four-year open access publishing agreement with Elsevier, the world’s largest scientific publishing company. It’s the largest such agreement to date in North America and makes more of the UC’s research freely available to anyone, anywhere in the world.

UC Berkeley’s University Librarian and economics professor Jeffrey MacKie-Mason, co-chair of UC’s publisher negotiation team, talked with Berkeley News about the benefits of this extraordinary deal for the UC system and, most importantly, for the public, which largely cannot afford the hefty price of scientific journal subscriptions.

Berkeley News: Why was this effort with Elsevier so important to the university, and who benefits the most from its success?

Jeffrey MacKie-Mason: Open access publishing is fundamental to what we do and to our mission. We’re a public research university, and our research is largely funded by public dollars, from residents of California and the U.S. So, we feel an obligation to make the results of our research available to those worldwide who will benefit from our advances, without having to pay to read them. We’re trying to help the world; that’s why we do research. The Elsevier effort is so important because we accomplished 100 percent open access and did so with the largest publisher of our research.

The benefits of open access publishing are enormously widespread — they help fields including science, public policy, public health and education.

It’s the scientists who work for smaller or less well-known research institutions across the whole world who can’t pay for these scientific journals, and thus can’t keep up with research findings. The same is true for public health officials, and nonprofits that serve developing countries. Liberal arts colleges can’t afford to subscribe to most scholarly journals. In fact, no university in the world can afford to subscribe to everything.

This year, for example, our researchers made extraordinary progress in understanding, responding to and conquering the novel coronavirus, and that work was immeasurably helped by rapid, unrestricted access to scholarly publications. When the pandemic became a worldwide crisis last spring, most major scientific publishers, including Elsevier, made the articles they’d already published and any further research relevant to the coronavirus and COVID-19 open access. The articles had been behind a pay wall, but publishers recognized that scientists need to move fast.

Remind us how long the struggle with Elsevier had gone on.

It’s been a long road, a lot of work, and it took a tremendous number of hours to develop something so transformative. While the full process started nearly five years ago, we started this particular negotiation with Elsevier two years and eight months ago. We ended negotiations with Elsevier for the first time in February 2019, and then took a break from the table for over a year, but we kept working on the project with other publishers. Including Elsevier, we’ve now reached nine open access publishing agreements.

We restarted negotiations with Elsevier in July of last year, 2020. They came back to us in June with a new offer, responsive to our main goals. That was the real turning point. They came to us with an attitude of wanting to work with us to find common ground, so that they could reenter business with us, as we’re a major customer. It was a promising new offer, and one we thought we could start negotiating about.

Elsevier signed a few other open access agreements after we canceled with them, but the UC agreement is bigger than anything else they signed. No one could have foreseen all that would happen.

We had a terrific UC coalition with a really clear strategic plan. This was teamwork. We had a systemwide working group of 18 people — librarians, faculty and staff representing the whole system. Our negotiating team of five was half faculty, half librarians. And we also celebrate that our colleagues across the system were able to be very patient over the past two and a half years, when they’ve had no direct access to new Elsevier articles. That caused inconvenience for research and teaching. We can now tell our colleagues that it’s over. You can get direct access to newly-published articles again. We asked you to trust us, and we did it.

Was the team able to achieve any savings for the costs that remain? Subscriptions now are free, but not the publishing costs.

The whole production process of publishing — Elsevier gets 2 million manuscripts a year — has a big cost, and that includes the editing, managing of editorial process, final typesetting, software that needs constant improvement and updates.

Elsevier’s prices are still too high, and it makes outrageous profits. But we did get an expenditure reduction, and that will save money for the system and for the authors. Overall, the UC (libraries plus authors) will pay 7 percent less in total than if we had continued with the previous model. Another way of saying that is the UC will be paying about the same $13 million in 2021 as we paid in total in 2018, saving us over 7 percent by avoiding annual price escalation (inflation). Part of the way we got expenditure savings is by negotiating a 15 percent discount on the publishing price for articles in most journals (10 percent for a limited number of prestige titles).

We refer to these agreements as transformative open access agreements because they convert subscription payments into payments for open access publishing (with reading provided for free). It is a new approach we helped develop with other leading institutions a few years ago, in large part through the OA2020 initiative.

What’s next in UC’s fight for open access? Are there more publishers of scholarly research that the team is negotiating with? And has UC created a model with its open access agreement work for other schools seeking such agreements?

Elsevier is our ninth open access publishing agreement, all in the past two years. We want to do this with every publisher, and there are dozens and dozens. But the top 20 of them will cover more than 80 percent of our articles. At this point, we have more than 30 percent of UC-authored articles covered by open access agreements. We’ve got about five more underway. If we succeed over the next two to three years, we’ll be at 75 percent of articles covered. Ultimately, we’re trying to make this a standard way of doing business, so that all agreements are open access, and all scholarly publishers will stop selling subscriptions. That’s why we publish our agreements, so all can see the details, and why we have offered training workshops and prepared a toolkit to help other institutions pursue the same path.

Essentially all major research universities, with few exceptions, either individually or as part of a consortium, have Elsevier agreements, and they’ve been watching us ever since we launched our new open access campaign three years ago. We’ve had a lot of requests for consultations, to advise campuses around the world that are moving in this direction — some of them have already done so — and we think that with this announcement, we will see a lot of movement in this direction. Our news is really going to have a big effect, since Elsevier is the biggest scholarly publisher in the world, with the largest number of journals published. So far, this is the biggest open access agreement with any publisher of scholarly work in North America. And UC is responsible for about 10 percent of U.S. research output.

Interest in our transformative open access agreement work has already existed during the past three years. We’ve helped other schools, and I’ve traveled quite a bit to speak about this. For example, our team will be hosting a global conference in May, virtually, that will bring together 200 negotiators from universities from every time zone. Two weeks from now, I’ll be giving a webinar about this to the Association of Research Libraries (a membership organization of the top academic research libraries in Canada and the U.S.). This Friday, I’ll be speaking about it in a roundtable workshop with a lot of leaders from Europe.

When we do things that affect the world, we go out into the world to tell people about it.