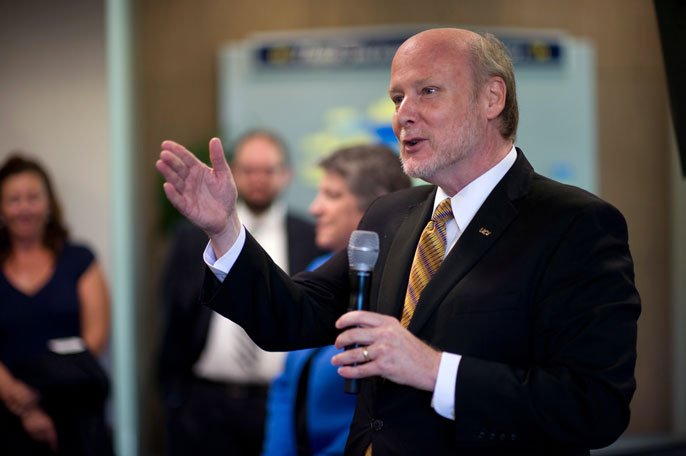 “The first class of fellows exemplifies our goal of bringing together the country’s great minds to study the complicated issues of free speech, activism and civic engagement,” says UC Irvine Chancellor Howard Gillman.

The fellows, who include scholars, students and analysts from across the country, will spend a year researching timely, vital First Amendment issues. Their work will include developing tools, analyzing data and presenting lessons from history to be highlighted at a national conference later this year. Each will reside for a week at one of the 10 UC campuses to engage with students, faculty, administrators and community members.

“The first class of fellows exemplifies our goal of bringing together the country’s great minds to study the complicated issues of free speech, activism and civic engagement,” said UC Irvine Chancellor Howard Gillman, co-chair of the center’s advisory board, whose role has been expanded to include administrative oversight of the center. “They are a diverse group of experts representing multiple perspectives. We’re proud to welcome them to the center and to support their work.”

The selection of fellows is a critical step in the development of the center, which was launched by UC President Janet Napolitano last October. She appointed Gillman, a leading constitutional scholar, and Erwin Chemerinsky, dean of the UC Berkeley School of Law, as co-chairs of an advisory board of elected officials, journalists, academics and corporate leaders.

Gillman will immediately start the search for the center’s first executive director, who will manage operations and programming.

Fellowship program — cornerstone of the center

The first fellows, listed below with their projects, were selected by the advisory board from 75 applicants nationwide.

With Gillman taking the administrative reins of the center, UC Irvine becomes a command post for the study of free speech. A constitutional scholar and recognized First Amendment thought leader, Gillman brings extensive expertise to his new role. He and Chemerinsky co-authored Free Speech on Campus, hailed as a primer on the complex subject.

“Chancellor Gillman is the natural choice for leading this important center,” Napolitano said. “The depth of his expertise and scholarship on free speech will guide research and promote discourse on this critical topic.”

The California legislature drew upon Gillman’s perspective in developing Assembly Concurrent Resolution No. 21, passed unanimously last summer. It urges state colleges and universities to adopt free speech statements consistent with the principles he articulated in a 2016 campus policy statement.

“Freedom of expression is the indispensable element in all our other rights in this country. Today’s students are rightly concerned about hate speech, bullying and polarization. We can and must educate them and ourselves about free speech and civil discourse. It is essential to democratic government and our future,” Chemerinsky said. “I look forward to working with Howard in creating a terrific center on free speech and civic engagement.”