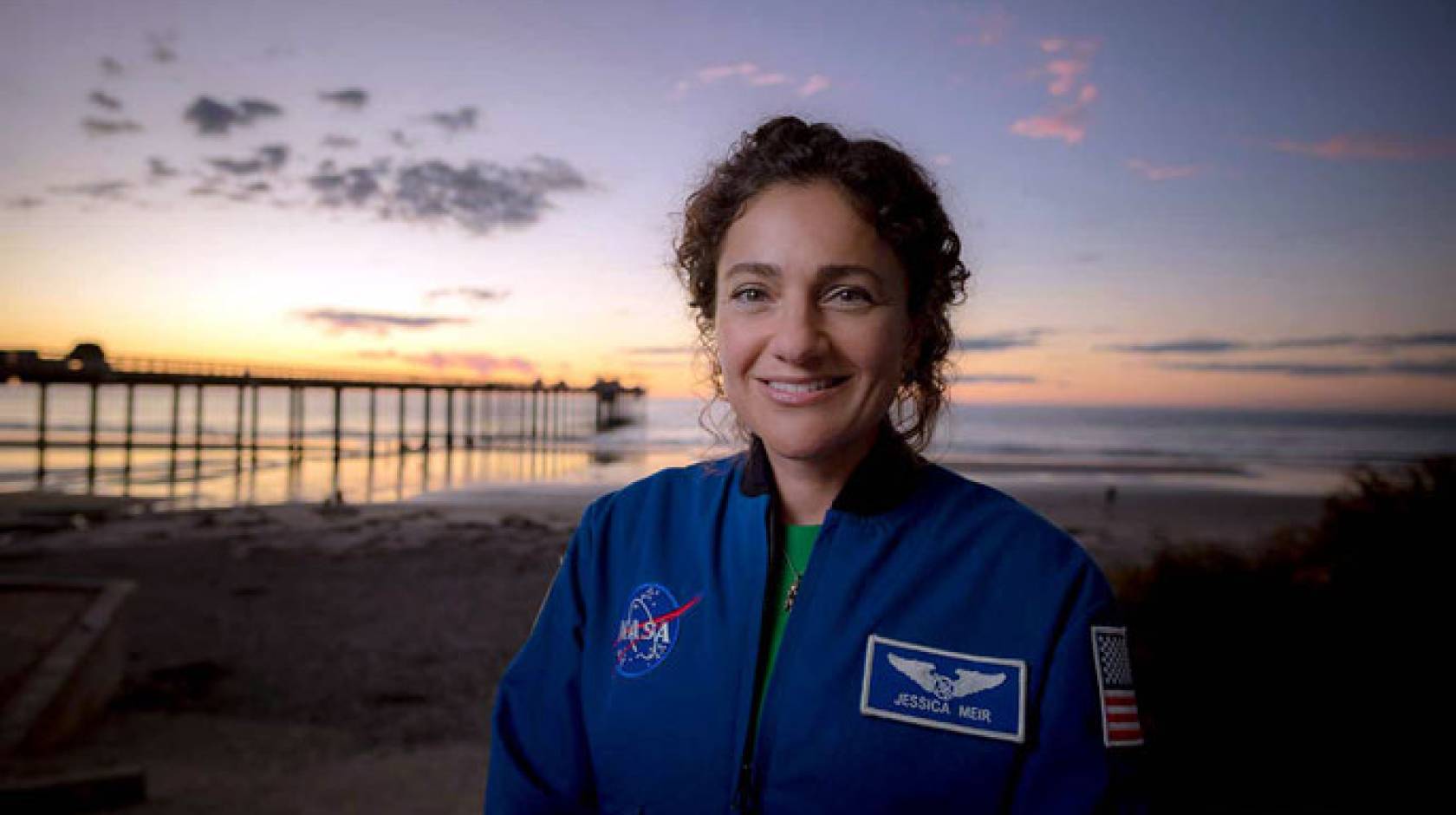 NASA astronaut Jessica Meir has wanted to travel to space since she was a child. This lifelong dream became a reality on Sept. 25, when the alumna of Scripps Institution of Oceanography at UC San Diego and two multinational crew members launched to the International Space Station (ISS) on a Russian Soyuz MS-15 spacecraft. Her next goal? Completing the first all-female spacewalk with colleague Christina Koch, scheduled for Oct. 21.

"It feels like home already," Meir told NASA in a live interview just moments after entering the space station located more than 200 miles above Earth. "It's going to be an amazing six months."

During her six-month mission aboard the ISS, Meir and her colleagues will conduct hundreds of experiments to study the physiological effects of long-duration human spaceflight. This research is crucial for NASA to achieve its goals for the Artemis program, which intends to land the first woman and the next man on the Moon by 2024, and its longer range goal of sending astronauts to Mars.

Meir is no stranger to conducting science in extreme environments. While a graduate student in the marine biology program at Scripps Oceanography, Meir researched the physiology of deep-diving animals including emperor penguins in Antarctica and elephant seals in Northern California. A trained scientific diver, she studied emperor penguins above and below the ice in Antarctica during four research expeditions to the remote, icy continent.

In an interview with This Week@UC San Diego several weeks before the launch, Meir discussed her journey from UC San Diego to space, noting that soon she’ll come “full-circle” in terms of her physiology research.

“I'm very excited to be contributing to all of the amazing science that we have up there. Now, I'll be the animal in the extreme environment, just like the penguins and seals and birds that I've studied,” said Meir.

She discussed some of the planned experiments to study how human physiological systems are affected by microgravity and the spaceflight environment.

“One of the hot topics right now is looking at the health of the eye and some vision problems that we're seeing in some astronauts post-flight and changes in the retinal layer,” said Meir. “We're not sure if this is caused by the increase in pressure due to the fluid shift that we have when we're in space or what exactly is going on here. But we're looking more into that.”

The astronauts will also be studying cardiovascular health, as recent studies have shown that the walls of carotid arteries get stiffer and thicker in space. “A six-month mission is even the equivalent of about 20 years of aging on the ground,” noted Meir.

“You can actually grow bigger and more perfect crystals without gravity, so determining the structure of these proteins can lead to the development of inhibitors for diseases,” she said.

In addition to contributing to the “amazing science” at the ISS, Meir said she is really excited by the strong possibility that she’ll conduct one or more spacewalks — when an astronaut gets out of a vehicle while in space.

“That was always the personal vision that I had in my head of floating out there in your own little self-contained spacecraft, which is your spacesuit, which you're depending on for life support for everything, and looking back at the earth,” said Meir.

During one of the planned spacewalks, Meir and her colleagues will repair a critical pump on the Alpha Magnetic Spectrometer, a particle physics detector that’s mounted on the ISS.

“This instrument was something that was not designed to be fixed by anyone in a spacesuit,” said Meir, noting the intense training required to work in the puffy suit and perform tasks while wearing large, thick gloves. “Now we have to do it.”

UC San Diego has a history of producing alumni who have pursued successful careers at NASA. Meir is among three alumni — all women — who have become NASA astronauts. Megan McArthur, who holds a Ph.D. in oceanography from Scripps, traveled to space in 2009 and helped repair the Hubble telescope. Kate Rubins, who studied microbial biology as an undergraduate, became the first person to sequence DNA in space.

“UC San Diego and Scripps are really just powerhouse institutions when it comes to research,” said Meir, discussing her shared background in science with McArthur and Rubins. “Those are the types of backgrounds — especially if you look at Scripps — of people that are selected to be astronauts.”

Meir believes that her research experience in extreme environments coupled with her scientific expertise helped her secure a spot in NASA’s class of astronaut candidates in 2013. The mental and physical challenges she encountered in Antarctica as a Ph.D. student helped her learn how to adapt to any situation or environment, and it showed her the value of working as part of a team. For example, if a big storm came through, the group would have to cancel its planned activities and instead shovel snow all day or repair an instrument. Other days were devoted to conducting research experiments or diving in the freezing water.

“I think when I'm most challenged like that, whether it's diving under the ice or now, this job as an astronaut, is really kind of the epitome of that mental and physical combination,” said Meir. “Something about that just really captures my spirit and makes me really feel the most fulfilled.”

Growing up in rural Maine, Meir was often surrounded by nature, from dense forests to dark starry skies. She thinks that being immersed in this environment is what initially sparked her interest in the natural world. She credits her parents, particularly her Swedish mother who has a natural ‘connection’ to nature, with supporting her path to science, and ultimately, to space.

Her budding interest in NASA’s astronaut program was further strengthened by support from her Scripps advisors, Paul Ponganis and Jerry Kooyman. Meir stressed the value of mentorship for early career scientists, something that helped her immensely as she navigated graduate school.

“Not only are they at the top of their field and amazing scientists, but they're just really great people,” Meir said of Ponganis and Kooyman. “And I think for me, especially as a graduate student starting out, that made a huge difference because they treated me like a person and they also cared about me as a person. They weren't only focusing on the science.”

Kooyman and several others from Scripps who are close to Meir traveled to Kazakhstan to see the launch from the ground. Meanwhile at Scripps, Ponganis joined nearly 100 people in Meir’s orbit — including family, friends, and former colleagues — for an early morning launch viewing party at the Surfside student lounge, one of Meir’s favorite spots on campus.

The event featured an acoustic performance by recording artist Grace Potter, a close friend of Meir’s, and an immersive VR experience of the ISS recorded by Félix & Paul Studios. Commemorative cookies, Tang, and freeze-dried Space Ice Kream were served to guests, who also received a custom patch designed for Meir, representing her journey from Scripps to space.

Cheers erupted as the rocket blasted off from the ground at 6:57 a.m. PDT, and again when it reached orbit.

“Today has been a culmination of Jessica’s aspirations and work for a long period of time. I always had full confidence when she was here at Scripps that she would eventually get into the space program,” said Ponganis. “It fills me with satisfaction and pride that we were able to assist her in reaching this goal. It’s a very happy day.”

Alyssa Griffin was one of several Scripps Ph.D. students who attended the launch party. Griffin said she’s had the pleasure of meeting Meir twice over the past few years when she visited Scripps and participated in student meet-and-greet lunches.

“What I love about Jessica's story is her unwavering determination towards a lifelong dream of becoming an astronaut and going into space. It was deeply inspiring to see her achieve that dream this week,” said Griffin. “The emotions of Jessica's friends, family, and UC San Diego ‘family’ at the launch party was a beautiful reminder that space exploration brings all of us together through the contemplation of our collective place in the universe.”

During her down time in space, Meir plans to spend some time in the Cupola, a dome-like observatory module with seven windows that provide a bird’s eye view of Earth.

“I think it's something that obviously never gets old, to have the entire planet below you, especially coming from an oceanography school,” said Meir. “I mean, come on! That's a lot of ocean to look at down there.”

Meir is looking forward to sharing her space journey with those of us here on Earth, and plans to post updates to her Twitter and Instagram accounts.

“What I'm so excited to do is really share this with everybody because I'm the one that's lucky enough to get to do it,” said Meir. “But I wouldn't be here at all if it weren't for all the people along the way who helped me get where I am.” 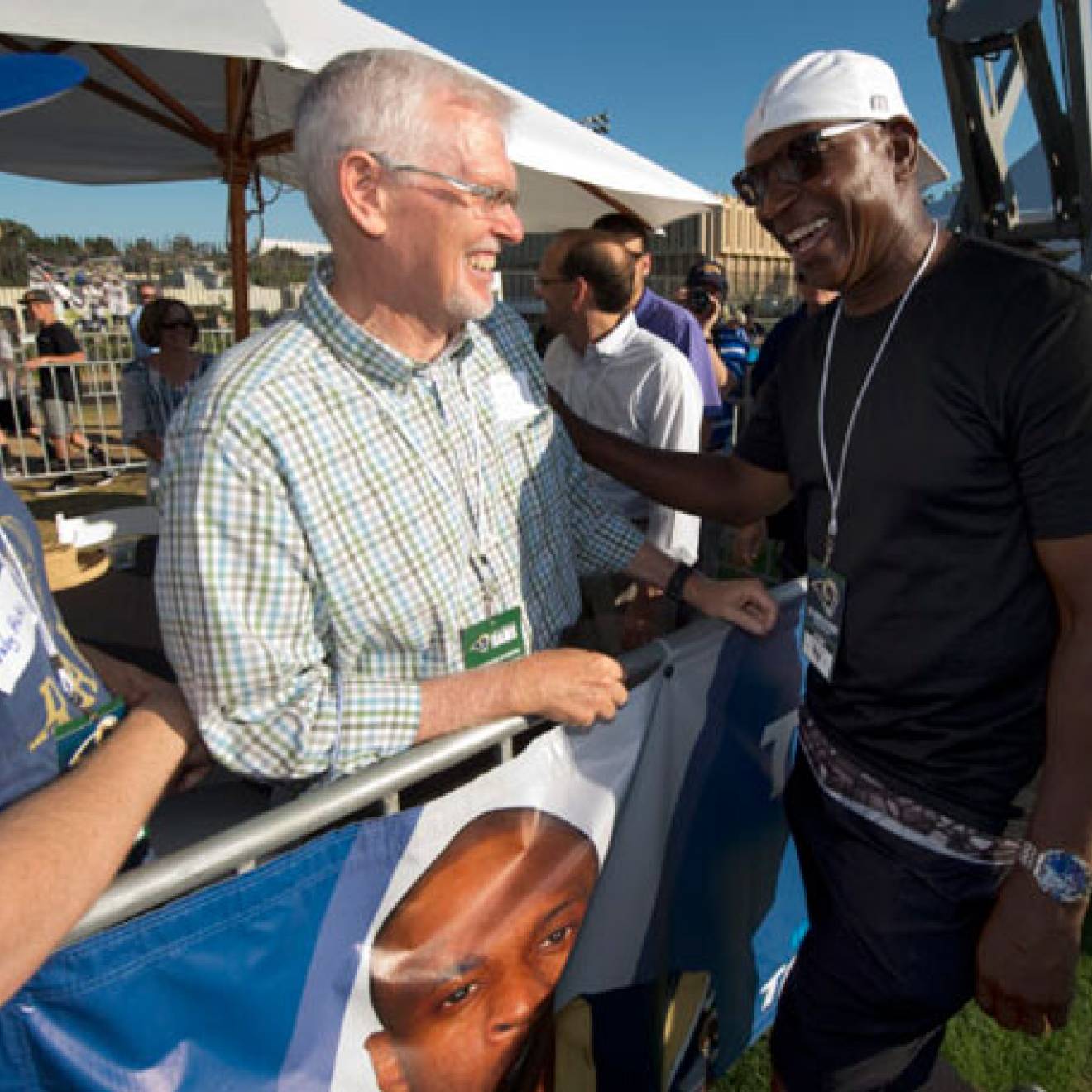