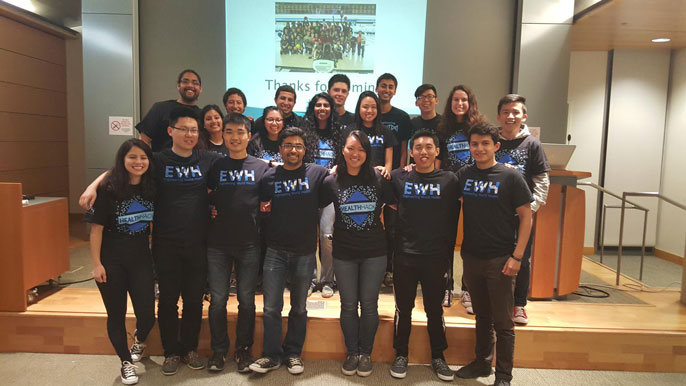 A group of students from the Jacobs School of Engineering at the University of California, San Diego will spend the summer trying to curb the HIV epidemic in Tijuana, Mexico.

Two teams from UC San Diego’s Engineering World Health (EWH) student organization and Global TIES program are combining forces this summer to bring a device they created to monitor viral load in HIV patients to a clinical setting in Tijuana, Mexico for testing.

The teams were tasked with building a low-cost HIV monitoring device for a hospital in Mozambique. UC San Diego Health doctors Matt Strain and Davey Smith are advising both of the teams.

“Patients in the United States on HIV therapy are tested every three to six months to make sure their treatment is still effective,” said Yajur Maker, co-president of Engineering World Health and bioengineering undergraduate student at the Jacobs School. “This enables doctors to change the patient’s therapy if the virus has become resistant to the drugs being given.”

To establish when the virus has become resistant, the patient’s viral load or the amount of virus present in the blood, must be assessed.

“If a therapy is working, the viral load goes down,” said Maker. “If the virus has become resistant, it goes up.”

Viral load test equipment costs roughly $80,000, and $65 per test. The students from the Global TIES Open Viral Load (OVL) Team and EWH have each developed prototype viral load testing devices that cost under $2,000. The projected cost per test is $5.

The two teams are combining forces to take their completed devices to a clinic in Tijuana, Mexico for testing, with the help of their advisors.

“We’ll adopt the best components from each team’s design and incorporate them into a system that’s ready for field implementation,” said Maker.

The teams have won over $31,000 in funding this year, including the Open Viral Load and Engineering World Health systems winning first and second place respectively in the Big Ideas at Berkeley Global Health track and receiving $2,000 each from the UCSD Social Innovation Fund.

"The Open Viral Load Team was one of two [Global TIES] teams selected for this year's Clinton Global Initiative University, said Mandy Bratton, the executive director for Global TIES at UC San Diego. “We are very proud of the work these students are doing and the impact it promises to have for HIV patients in low resource areas.”

The key is determining the viral load, or the copies of HIV present in the body. After a certain threshold, or above a certain number of copies, the virus is determined to be resistant to HIV therapy, and patients must start new therapies. However, in low resource settings and without the necessary equipment, changing therapies is nearly impossible for doctors to justify.

The OVL and EWH teams are approaching the problem differently. In EWH’s case, the device consists of a low-cost centrifuge, PCR thermocycler, and a gel electrophoresis box.

“The centrifuge processes the blood so that we can get to the viral RNA,” said Maker. “After we extract the RNA, we amplify a gene specific to HIV using the thermocycler. Finally, we run it through the gel box to see whether viral RNA is present in large quantities. This helps doctors make the call on whether the patient’s HIV medication is not working. This process isn’t novel, but we’re making it accessible to hospitals and clinics in low-resource areas, such as Tijuana, which is so close to home.”

The difference between EWH’s device and the device the Global TIES team has built is the output.

“The difference is a qualitative versus a quantitative output. EWH’s device has a qualitative yes or no output, identifying for the doctor when a viral load threshold has been reached,” said Maker. “On the other hand, the OVL Team has built a device that quantifies the amount of virus present.”

Hayley Chong and Kirk Hutchison are part of the OVL Team.

Chong is a third year bioengineering major. “I chose Global TIES as a freshman because every student I met that was in the program was passionate about their project,” said Chong.

Hutchison, a second year biology major, chose to participate in Global TIES after hearing a talk by a Global TIES member at an event.

“Global TIES is the reason I came to UC San Diego,” said Hutchison.

The two joined the OVL Team at the same time, after taking the introductory course in the Global TIES program.

“We decided to come up with a way to quantify the viral load,” said Chong. “We started with a microwell chip – once we extract the RNA, we can deposit it on the microwell chip and use a fluorescent probe to detect the number of copies in each sample. If five wells on the chip light up, there are five copies of the virus.”

The device is also advantageous because its components can be used separately to identify other diseases. Students will also be working with Dr. Davey Smith this summer to adapt the device as a rapid response test for the Zika virus.

Over the course of the summer, groups of students from the two teams now look to clinically validate the designs and begin field implementation. Lab testing will continue under Drs. Strain and Smith here in the U.S. and with their new partner Dr. Jose Roman Chavez Mendez at the Universidad Autónoma de Baja California (UABC) in Tijuana. With the teams collaborating and working together this summer, the future looks bright as they look to make an impact on the first of many low-resource settings.