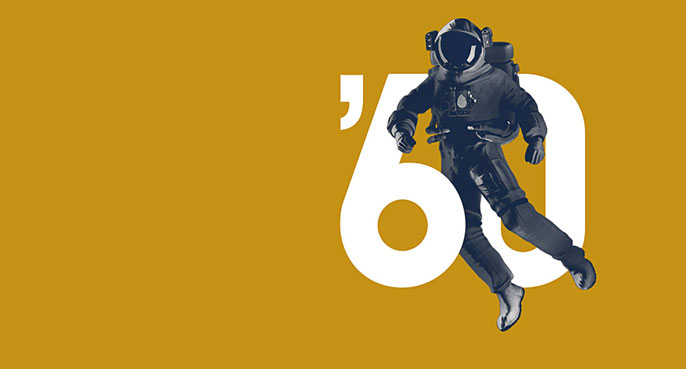 Over the span of six decades, what began as a brand new University of California campus situated on the coast of La Jolla has evolved into one of the top 20 research universities in the world. From its start in 1960, University of California, San Diego founder Roger Revelle envisioned the institution as one that would stand out definitively from the rest. Since then, the university has lived up to that criteria, making its mark on the world through a legacy of innovative collaboration and cutting-edge impact.

Starting this November to coincide with the university’s founding date, UC San Diego kicks off a yearlong celebration of its 60 year anniversary milestone. Throughout the 2020-2021 academic year, UC San Diego will commemorate its founding through virtual events that celebrate the campus’ remarkable legacy and ability to focus its attention, talents and research prowess to address the complex challenges facing society. Virtual anniversary programming includes the upcoming virtual event series “Evenings of Nonconventional Wisdom” launching in January 2021, among other forthcoming initiatives.

“In a year like no other, UC San Diego’s campus and healthcare community continued to demonstrate the pioneering and innovative Triton spirit that has propelled this university and academic medical center faster and further than any other in the world,” said Chancellor Pradeep K. Khosla. “Our hospital was the first in San Diego to treat COVID-19. Our researchers immediately dove into understanding how to stop its transmission and how to treat it. And we were the first university in the nation to announce plans to bring students and researchers back to campus. Together, we continue to find solutions to the world’s most pressing issues. I am pleased to kick off our 60th Anniversary year and to celebrate our many achievements. UC San Diego has been on ‘the edge of tomorrow’ for 60 years now, and I don’t see that changing any time soon.”

UC San Diego was officially founded on November 18, 1960, as a forward-thinking experimental campus serving a few graduate students in physics, chemistry and earth sciences. Scripps Institution of Oceanography, established in the early 1900s and now a division of the university, catalyzed UC San Diego’s initial growth. By the time UC San Diego was founded, Scripps was already recognized as a prominent research institution with prestigious faculty such as Charles David Keeling, a geochemist whose discoveries became a touchstone in global climate change research and understanding.

In the fall of 1964, UC San Diego welcomed its first trailblazing class of 181 undergraduates. Since then, the university’s population of bright and talented students have been steadily climbing. This summer, amid the COVID-19 pandemic, the university safely and successfully celebrated over 9,000 students in its graduating class with UC San Diego’s first-ever Virtual Commencement.

There are currently more than 200,000 alumni around the world dedicating their time and talents to driving positive change that makes the future a better, more equitable place for all. The university’s impressive roster of alumni includes NASA astronaut Jessica Meir, #BlackLivesMatter founding member Alicia Garza and Switchfoot drummer Chad Butler. Throughout the last 60 years, every single alumni has played a role in forging the university’s collaborative culture of seeing things differently to drive progress locally, regionally and globally.

“When I arrived, I immediately fell in love with the campus. My idea of beauty is still the glow of Geisel Library at night and the sunsets on the Southern California coast,” said Kimberley Phillips Boehm, who received her bachelor of arts degree in history from Warren College. “I loved that UC San Diego was young and we all could help create the traditions. In 1980, I helped launch the yearly musical production at Revelle College, which is still going strong at Muir College.”

Boehm continues to engage with the university in her role as president of the UC San Diego Alumni Board of Directors.

“I’m grateful to the education, skills and learning experiences I received both in and out of the classroom,” said Ping Yeh, vice president of the Alumni Board of Directors and CEO of StemoniX who studied mechanical engineering at UC San Diego. “I honed skills from serving in student groups to the tennis team, and my closest friends today are relationships that began 25 years ago! I’m consistently in awe of the caliber of students and the discoveries that come out of the university.”

UC San Diego’s esteemed alumni and faculty are also among the world’s brightest industry leaders and include Nobel laureates; Pulitzer Prize winners; Fields Medalists; Tony, Grammy and Academy Award winners; MacArthur Fellows; and National Medal of Science recipients. From its start, UC San Diego has excelled in recruiting talented scholars that have garnered the university’s reputation as among the largest, most productive and most prestigious research universities on the planet. Two recent faculty achievements include distinguished professor of music Anthony Davis receiving the 2020 Pulitzer Prize in Music and mechanical and aerospace engineering professor Olivia Graeve receiving the Presidential Award for Excellence in Science, Mathematics and Engineering Mentoring from the White House.

“I am truly honored to be part of a great university and was humbled to receive the Revelle Medal last year,” said Lawrence Krause, a member of the 1986 founding faculty of the School of Global Policy and Strategy. “Being part of UC San Diego has kept me intellectually alive during these last twenty years. Before the pandemic, I visited the campus several times a week, which permitted me to keep up on cutting research in many fields through the faculty lunches.”

UC San Diego’s academic excellence and culture of out-of-the-box thinking is also a major draw that inspires many alumni to return to campus as faculty members.

“The establishment of Ethnic Studies in 1990 was what brought me back to the university,” said distinguished professor of ethnic studies Yến Lê Espiritu who earned a bachelor’s degree in communication at UC San Diego. “As a founding faculty of the Ethnic Studies department, I am excited to see how the department’s research and teaching have turned UC San Diego into a top university for the interdisciplinary study of race, ethnicity, indigeneity, gender, sexuality, class and dis/ability.”

The university’s scholars have continued to create lasting impacts through creative thinking and an unwavering desire to shape new fields and transform lives. A sampling of these contributions includes developing effective methods of blocking malaria transmission in mosquitos; creating biodegradable algae-based flip-flops designed to help eradicate plastic waste; and building a camera network that has become a vital firefighting tool helping first responders confirm and monitor wildfires across California.

Today, the research and scholarly activities of campus’s faculty and leaders are forging the path toward addressing the COVID-19 global health crisis. In an effort to provide a world-class education to students while stemming the spread of the coronavirus, campus community members have applied their talents to developing the groundbreaking Return to Learn program. This university-wide strategy is designed to allow UC San Diego to return to in-person teaching, learning, conducting pioneering research and serving its communities in the safest way possible. The nationally recognized program has served as a model for other universities and institutions for effectively keeping communities safe. Alongside guidance from public health agencies, Return to Learn is driven by the expertise of researchers from the UC San Diego School of Medicine and the Wertheim School of Public Health and Longevity Science, as well as health care experts from UC San Diego Health.

UC San Diego Health — the region’s only academic health center — and its schools of medicine and pharmacy have been caring for the community and advancing medicine for decades. Well equipped to deliver the highest quality patient-centered primary and specialty care, UC San Diego Health is ranked among the nation’s best in medical and surgical specialties by U.S. News and World Report.

Looking ahead toward the future

Consistently ranked as a top 15 research university in the nation and the world, UC San Diego is one of the region’s largest contributors of economic, research and community impacts. Breakthrough research and innovation is at the core of UC San Diego’s vision; annual sponsored research funding has topped $1 billion for 11 consecutive years, with a record $1.4 billion in fiscal year 2020 UC San Diego also has an estimated $16.5 billion in annual economic impact in California and is projected to have $18.8 billion in annual economic impact for the state by 2023.

As the university sets its sights on the next 60 years, it does so empowered by its rich history of cutting-edge research, teaching and action in the areas of social innovation and public service. In 2020, UC San Diego was once again recognized as the No. 1 public university in the nation by Washington Monthly based on the university’s contributions to social mobility, research and service.

In just six decades, UC San Diego has grown to encompass seven undergraduate colleges, six academic divisions and six graduate and professional schools. The university is also poised for future physical growth — while the pandemic has put some projects on pause, there is a campus transformation currently underway that will shape the university into a premier destination for students, patients, faculty, staff and the community alike. Transformation projects include the UC San Diego Blue Line Trolley extension, Franklin Antonio Hall and UC San Diego Downtown. This celebration of 60 years also honors the university’s status as a home for leaders in academics, research and athletics. After two decades as one of the most successful programs in NCAA Division II, the UC San Diego intercollegiate athletics program reached a new milestone in 2020 as a member of the Big West Conference in NCAA Division I.