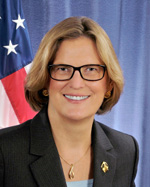 The National Oceanic and Atmospheric Administration (NOAA) has appointed UCSC alumna Kathryn Sullivan to serve as acting administrator for NOAA. She replaces Jane Lubchenco, who announced last year her intention to step down at the end of February as NOAA administrator and under secretary of commerce for oceans and atmosphere.

Since 2011, Sullivan has served as assistant secretary of commerce for environmental observation and prediction and as deputy administrator for NOAA. She will continue to serve in these roles in addition to her new position as acting administrator. NOAA is part of the U.S. Department of Commerce and is responsible for monitoring the nation's climate, weather, oceans, fisheries, and coasts.

Sullivan graduated from UCSC in 1973 with a bachelor's degree in earth sciences. As a member of the NASA astronaut corps, she became the first U.S. woman to walk in space in 1984. Six years later, Sullivan joined fellow UCSC grad Steven Hawley (Ph.D., astronomy and astrophysics, '77) on the shuttle mission that deployed the Hubble Space Telescope. She flew on three shuttle missions during her 15-year tenure as an astronaut.

An accomplished oceanographer, Sullivan earned a Ph.D. in geology at Dalhousie University in Canada. She was appointed NOAA's chief scientist in 1993, overseeing a research and technology portfolio that included fisheries biology, climate change, satellite instrumentation, and marine biodiversity. Sullivan later served a decade as president and CEO of the Center of Science and Industry in Columbus, Ohio, one of the nation's leading science museums, and was the inaugural director of the Battelle Center for Mathematics and Science Education Policy at Ohio State University.  She has also served on the National Science Board and as an oceanographer in the U.S. Navy Reserve.

Sullivan was the keynote speaker at UCSC's 2011 Scholarship Benefit Dinner.