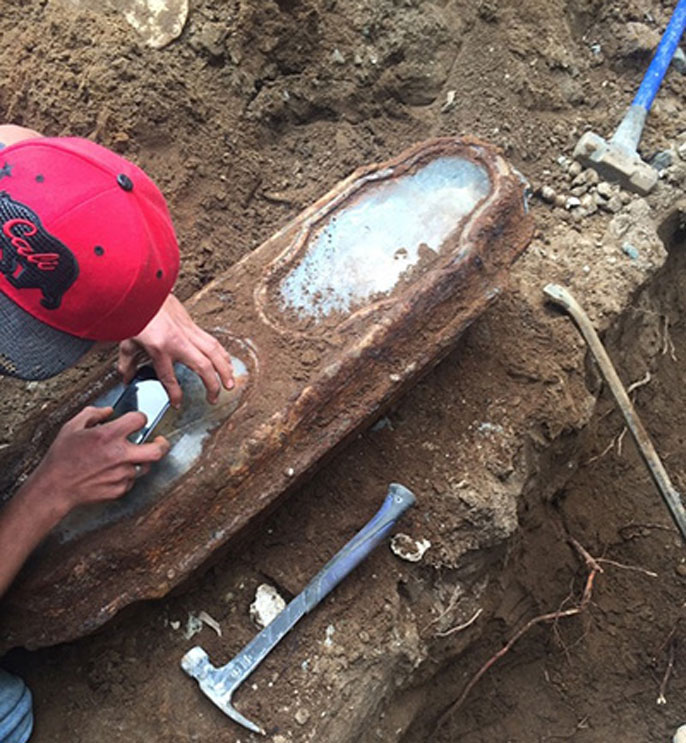 Credit: courtesy of Garden of Innocence

The coffin of a little girl was found buried beneath a San Francisco home during renovation work in 2016.

On May 9, 2016, a contractor discovered the casket of a child while excavating the backyard of the Karner family in the Lone Mountain neighborhood of San Francisco, setting off a search for the child's identity that garnered international attention.

It was determined that the lost child was a little girl, approximately 2 to 3 years of age, but who was she? What happened to her? When UC Davis anthropology professor Jelmer Eerkens heard about the little girl — dubbed Miranda Eve — he knew he had to help.

“I read they were planning to just rebury the body without any analysis,” Eerkens told The New York Times in June. “As an archaeologist, I thought, that’s not right. At some point, these things from the past become our collective heritage.”

To unravel the mystery, Eerkens worked with more than 30 specialists and volunteers, including UC Santa Cruz biomolecular engineering professor Ed Green and genealogist and Garden of Innocence founder Elissa Davey. Green's DNA analysis ultimately enabled the investigators to make a definite identification of the child in the casket.

The type of casket Miranda Eve was found in, along with the clothes she was wearing, indicated she was buried approximately 140 to 150 years ago. Researchers discovered that from 1865 until the early 20th century, the present day Lone Mountain neighborhood of San Francisco had been a cemetery owned by the Independent Order of Odd Fellows. The cemetery closed to new burials in 1902, and in the early 1930s, those interred there were removed and reburied in the Greenlawn Cemetery in Colma, Calif. Somehow, the little girl's casket was missed and left behind.

Using an 1865 plan for the development of the cemetery (a map for a time after 1902 could not be located), researchers pinpointed two sections of the cemetery that most likely intersected with the location of the Karner’s home. Historical maps were then digitally layered on top of each other and cross-referenced against photographs to identify any family plots in that location.

Before she was reinterred, samples of hair were taken for chemical and DNA testing in the hopes of finding a match with a living relative and learning what led to her death at such a young age. In the clean-room facilities in Green's Paleogenomics lab at UC Santa Cruz, DNA was extracted from the Miranda Eve hair samples using standard ancient DNA techniques.

Meanwhile, Eerkens and his students at UC Davis analyzed the nitrogen isotopes in the hair, which revealed that she had suffered from malnourishment for several months before her death. “This indicates she was suffering from a chronic illness that caused ‘wasting’ or starvation, rather than something more sudden such as smallpox, which was common during this time, or an injury,” he said. “While the exact illness is still unknown, we suspect an illness caused her to eat less and less until she was unable to eat at all.”

Green's initial analysis of the nuclear DNA confirmed little Miranda Eve to be a girl of likely European ancestry, and her mitochondrial DNA was found to be a type most common on the British Isles.

Research on internment records narrowed the search to two highly likely candidates for Miranda Eve's true identity, and an exhaustive search of genealogical records eventually found living family descendants for both candidates. The descendants were contacted and agreed to provide DNA samples for comparison. Green then was able to find a clear match between the DNA from the hair sample and that obtained from the living family member of one of the candidates.

After a year-long search, the mystery was solved: Miranda Eve was born on November 28, 1873, as Edith Howard Cook, the eldest daughter of Horatio Nelson and Edith Scooffy Cook, members of two prominent San Francisco families during the late 19th and early 20th centuries. Edith died just short of her third birthday in October 1876. Her three siblings, two brothers and a sister, survived her. Her older brother Milton H. Cook’s grandson, Peter Cook, resides in the San Francisco Bay Area today.

Peter Cook’s father passed away when he was just three years old, so he didn’t know much about his father’s family history until Eerkens contacted him about Edith. When the DNA testing came back as a match, “It hit the roof for me. I was beaming ear-to-ear with the news,” Cook said. Now the 82-year-old can share the Cook family history with his eight children, 13 grandchildren, and 10 great-grandchildren.

Principle researchers on this project in addition to Professors Eerkens and Green and Ms. Davey, include Dave Frederick, genealogist and cold case investigator based in Billings, Mt., genealogist Bob Phillips of Seattle, Wa., and Alex Snyder, transportation planner and public historian in San Francisco.