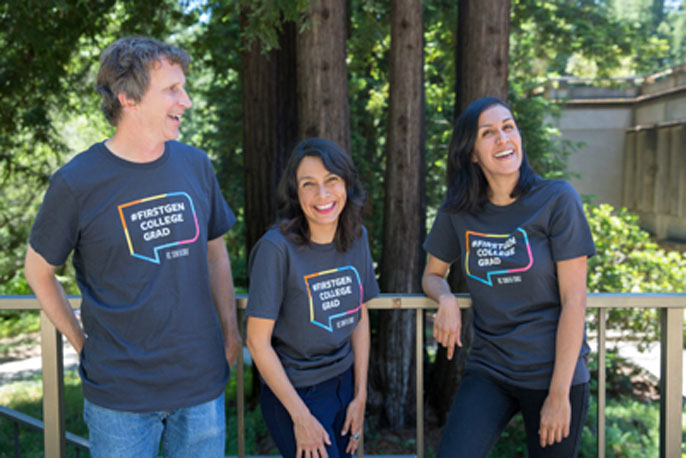 UC Santa Cruz is launching an initiative to encourage educators on campus to identify themselves as first generation — the first in their families to graduate from a U.S. four-year college or university.

Universities are driven by metrics. They track graduation and retention rates and the number of graduates who secure employment within their field of study.

But public institutions are increasingly focused on another key metric — the degree to which they enable upward mobility.

For many professors, administrators, and outside commentators, it is vital that U.S. higher education afford people from lower income households, and from traditionally underrepresented ethnicities and cultural backgrounds, equitable educational opportunities.

“It is one of the most important things that the United States should be doing in the 21st century,” said interim Vice Provost for Academic Affairs, Martin Berger. “In order to unlock the full potential of the country, you need to do more than educate the same elite population generation after generation. Doing so limits our ability to innovate and problem solve. The more heterogeneous our approach, the more creative our solutions.”

With this vital mission in mind, UC Santa Cruz will launch the First-Gen Faculty (FGF) campaign during Student Achievement week, which starts June 5. This initiative is aimed at encouraging professors on campus to identify themselves as first generation — the first in their families to graduate from a U.S. four-year college or university.

So far, 54 professors have identified themselves as first-generation faculty, and 41 faculty have signed on as supporters.

Shows of support and solidarity

Berger is in the latter group, but Rebecca Covarrubias, faculty in psychology and a prime mover behind the campaign, knows firsthand the trials and triumphs of being a first-generation student.

Covarrubias’ childhood in a lower income, primarily Mexican American community in Phoenix meant that when she finally reached the University of Arizona, she was bringing along her family and her community. Yet, a firm sense of belonging proved elusive once on campus.

“Not only did I miss my family, but I also wasn’t prepared for college,” she said. “I didn’t use office hours or talk to professors because I didn’t think I had to.”

These strategies — seeking out faculty, forming study groups, attending office hours — are key to student success, but activities that some first-generation students may only learn about once on campus. “There are many hidden rules about how to navigate the university,” Covarrubias said. “We have great programs and people on campus who work hard to unpack these rules for students. But, if we are really going to serve students, the institution, as a whole, needs to be responsible for bringing resources to students.”

That’s why the T-shirt campaign, where first-generation faculty and supporters will don the same distinctive shirts and buttons, is so important.

“It’s about raising awareness of the large number of first-generation students on our campus, and also about raising visibility of an often invisible group,” Covarrubias said. “You don’t always know who the first-generation students are in your classroom. In drawing attention to the shared identities among students and faculty, we can send a clear message that we want you here, that you belong here, and you will succeed here.”

The psychology professor says she is further convinced that young students who see people belonging to their same cultural, ethnic, and socioeconomic backgrounds occupying a position like university professor helps instill a sense of possibility central to successful careers in higher education.

“Studies show that certain students who are predisposed to feeling like they don’t belong are less likely to graduate, even if they are academically on par with their peers,” he said.

Padgett knows the feeling well. He is a first-generation college graduate, raised in a low-income household with a father who never graduated high school and a mother who got a diploma but not a college degree.

“I lacked ‘cultural capital’,” he said. “I didn’t know how to pronounce a word like ‘poignant’ and I had no idea who Richard Strauss was. I felt that. I had friends, but I also felt a little isolated.”

While the initiative is designed to help puncture that sense of isolation and replace it with a sense of belonging, Covarrubias said the initiative also serves to educate professors about how to recognize the cultural strengths of first-generation students.

“This is not about student deficiencies. This is about institutional deficiencies in recognizing what students bring with them to our classrooms,” she said.

Many first-generation students come from families where they are depended upon to provide vital services such as translation, or supplemental income.

“Some of these students work two or three jobs to support themselves and their families. They are doing incredible things that we don’t acknowledge in the classroom. We have a lot to learn from our first generation students,” Covarrubias said.

These students are highly motivated and come to college with a firm purpose.

However, professors are trained to identify students who speak up in class, effectively use office hours, use sophisticated networking to score internships, or rely on recommendations as proof of proficiency.

Covarrubias said teaching professors how to identify and recognize diverse strengths and skill sets in students will result in a system that serves and includes a more diverse student body.

Meeting the demands of demographics

Berger agrees that the initiative's primary goal is two-fold: to make students feel a sense of belonging and ownership over their education and to help teachers understand the challenges and cultural wealth of first generation students.

“We have a long way to go to build better connections between students and faculty and to improve the mentoring first generation students receive,” he said.

Shifting demographics in California make crafting policies that address the challenges of first-generation students and the professors who teach and guide them more urgent than ever.

Of the students enrolled throughout the University of California system in fall 2016, 42 percent came from households where neither parent had graduated college. The number is the same for UC Santa Cruz. In 2016, 42 percent of the entering class are vying to become the first in their families to graduate with a college degree.

The FGF Campaign begins the week of June 5.

For further information visit the UC Santa Cruz First-Gen Faculty website. To participate or if you have questions, please contact Gwynn Benner at gbenner@ucsc.edu or 831-502-7793.