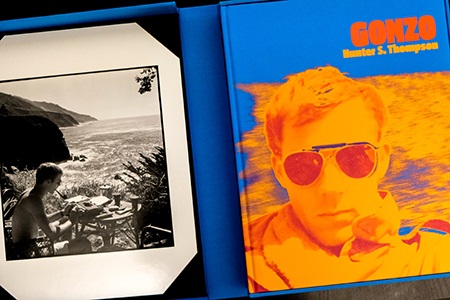 An 800-volume collection of works by famed author and journalist Hunter S. Thompson has been donated to Special Collections & Archives at UC Santa Cruz.

The founder of “Gonzo” journalism, an intensely personal style of writing that often includes the reporter as part of the story, Thompson is perhaps best known for his 1971 book, “Fear and Loathing in Las Vegas,” as well as his cultural and political contributions to Rolling Stone magazine, which turned him into a counterculture icon.

The campus received the gift from Eric C. Shoaf, who is the author of “Gonzology,” an extensive bibliography of Thompson’s work. Shoaf has spent more than 30 years acquiring the materials in the collection, which after processing will be made available to scholars and researchers through the University Library.

“The Eric C. Shoaf Collection of Hunter S. Thompson documents decades of work by this Gonzo journalist and author who peeled back the layers of post-counterculture America through his writings and artistic collaborations,” noted Teresa Mora, head of Special Collections & Archives at UC Santa Cruz.

Mora said that in addition to first editions, translations, and pirated copies of Thompson's books, the collection also includes rare printed materials, ranging from early broadside poster publications and collective artists' magazines to fine press editions, and even a beer bottle containing a never before published short story printed on the label.

A long and wild ride

“This collection reveals the scope of Thompson's long engagement with many forms of print and art throughout his life, and opens a door for students and researchers interested in considering Thompson's place in 20th-century writing and literary presentation,” she added.

Shoaf explained why he decided to donate the collection to UC Santa Cruz, despite the fact that he had no previous connection to the campus.

“I found UC Santa Cruz to be an institution young enough to accept the collection and to appreciate it for what it represents and how it dovetails and augments the Grateful Dead archive,” said Shoaf. “Of course Thompson knew the Dead, spent time living in San Francisco and Big Sur during the sixties, and also hung out with the Hell’s Angels motorcycle club that became friendly with the Dead. To me the synergies of placing this Thompson collection alongside the Grateful Dead archive, and its appeal to researchers for both subjects, made this an easy decision to place the collection at UC Santa Cruz.”

Shoaf said he first discovered Hunter Thompson right after college. After reading the book “Hell’s Angels,” he “jumped right in” and began to read everything he could find by the author.

“I never met Mr. Thompson in person, but I did get an introduction from his literary editor, the educator Doug Brinkley,” Shoaf noted. “This led to a number of late-night telephone calls that I had with Thompson, each of which was long and quite illuminating. The protocol was for me to call at midnight MST, then start talking when the answering machine picked up and keep talking until someone picked up. It worked every time ... He did especially enjoy talking about the old publications and was surprised with a few I had uncovered that had had forgotten about.”

“I had plans to visit him at his home outside Aspen, Colorado, in spring of 2005 but he passed away in February of that year,” Shoaf added. “The next summer, his widow Anita Thompson invited me out to spend a week at the house and look through Thompson’s personal library among other things. That was a very nice thing to have happen.”

In addition to bibliographic work on Hunter Thompson, Shoaf has published three books on William S. Burroughs. He is also widely published in popular music and guitar-related magazines. His next publication will be a bibliography on the works of Tom Wolfe.