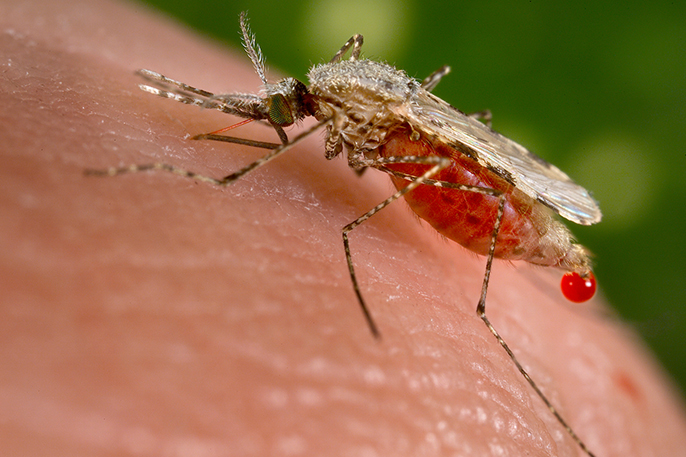 An Anopheles stephensi mosquito obtains a blood meal from a human host through its pointed proboscis. A known malarial vector, the species can found from Egypt all the way to China.

Using a groundbreaking gene editing technique, University of California scientists have created a strain of mosquitoes capable of rapidly introducing malaria-blocking genes into a mosquito population through its progeny, ultimately eliminating the insects’ ability to transmit the disease to humans.

This new model represents a notable advance in the effort to establish an antimalarial mosquito population, which with further development could help eradicate a disease that sickens millions worldwide each year.

To create this breed, researchers at the Irvine and San Diego campuses inserted a DNA element into the germ line of Anopheles stephensi mosquitoes that resulted in the gene preventing malaria transmission being passed on to an astonishing 99.5 percent of offspring. A. stephensi is a leading malaria vector in Asia.

The study underlines the growing utility of the CRISPR method, a powerful gene editing tool that allows access to a cell’s nucleus to snip DNA to either replace mutated genes or insert new ones. Results appear this week in the early online edition of Proceedings of the National Academy of Sciences.

“This opens up the real promise that this technique can be adapted for eliminating malaria,” said Anthony James, Distinguished Professor of molecular biology & biochemistry and microbiology and molecular genetics at UC Irvine.

For nearly 20 years, the James lab has focused on engineering anti-disease mosquitoes. His anti-dengue fever models have been tested in cage trials in Mexico, and in 2012, he helped show that antibodies adapted from the immune systems of mice that impair the parasite’s biology  can be introduced into mosquitoes. This trait, though, could only be inherited by about half of the progeny.

Earlier this year, UC San Diego biologists Ethan Bier and Valentino Gantz, working with fruit flies, announced the development of a new method for generating mutations in both copies of a gene. This mutagenic chain reaction involved using the CRISPR-associated Cas9 nuclease enzyme and allowed for transmission of mutations through the germ line with an inheritance rate of 95 percent.

The two groups collaborated to fuse Bier and Gantz’s method with James’ mosquitoes. Gantz packaged antimalaria genes with a Cas9 enzyme (which can cut DNA) and a guide RNA to create a genetic “cassette” that, when injected into a mosquito embryo, targeted a highly specific spot on the germ line DNA to insert the antimalaria antibody genes.

To ensure that the element carrying the malaria-blocking antibodies had reached the desired DNA site, the researchers included in the cassette a protein that gave the progeny red fluorescence in the eyes. Almost 100 percent of offspring – 99.5 percent, to be exact – exhibited this trait, which James said is an amazing result for such a system that can change inheritable traits.

He added that further testing will be needed to confirm the efficacy of the antibodies and that this could eventually lead to field studies. “This is a significant first step,” said James, a National Academy of Sciences member. “We know the gene works. The mosquitoes we created are not the final brand, but we know this technology allows us to efficiently create large populations.”

Bier, a professor of biology at UC San Diego, also noted that “the ability of this system to carry large genetic payloads should have broad applications to the future use of related CRISPR-based ‘active genetic’ systems.”

Malaria is one of the world’s leading health problems. More than 40 percent of the world’s population live in areas where there is a risk of contracting the disease. According to the Centers for Disease Control and Prevention, 300 million to 500 million cases of malaria occur each year, and nearly 1 million people die of the disease annually – largely infants, young children and pregnant women, most of them in Africa.

Nijole Jasinskiene, Olga Tatarenkova, Aniko Fazekas and Vanessa Macias of UC Irvine contributed to the study, which was supported by grants from the National Institutes of Health (AI070654, NS029870, AI29746 and AI116433) and the W.M. Keck Foundation and a gift from Drs. Sarah Sandell and Michael Marshall (to Bier).