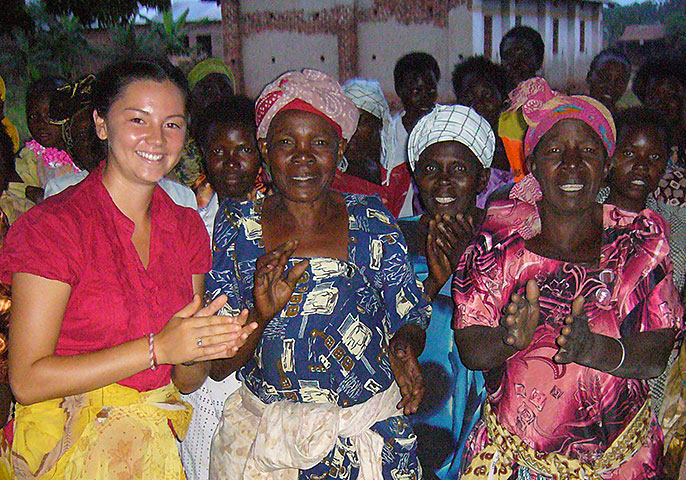 Lisa Flynn lives in a two-room dwelling without electricity, refrigeration or running water. The borehole where she pumps water is a kilometer away. Although she has lived for three months in Magada, the Uganda village where she works as a Peace Corps community health volunteer, the children still chant her nickname, Naigaga, when they see her on her daily treks to fetch water or buy bananas and tomatoes at the market. For many, she is the first "muzungo," or white person, they have ever seen.

"I won the lottery when it comes to countries and families to be born in," said Flynn in an email from Uganda. "The majority of people in this world will never see the same privileges and opportunities that I have taken for granted most of my life. It was my study abroad experience in India that deeply impressed this notion on me. I joined the Peace Corps to do anything I can to improve the quality of life for my brothers and sisters of the world."

Working with a nonprofit called Aim for Restoration of Hope, the 2009 UC Santa Barbara graduate is starting tailoring and adult literacy classes to improve the economic independence and self-esteem of the village women.

Flynn is one of 459 University of California alumni currently serving in the Peace Corps, carrying on a 50-year UC tradition. Since President John F. Kennedy created the organization in 1961, UC has seen more of its alumni join the Peace Corps than any other U.S. university. More than 10,375 have served, or 5 percent of the 200,000 who have heeded Kennedy's challenge to achieve a higher purpose by living and working in developing countries.

UC's shared commitment to this grand public service mission runs deep. In the early days of the program, volunteers trained in the United States before shipping out to their assigned countries. UCLA was one of the first training centers; between 1961 and 1969, it trained about 2,000 volunteers from all over the United States.

UC Berkeley holds the record for producing the most volunteers with more than 3,400. In the Peace Corps rankings of large colleges and universities that produced the most volunteers in 2010, UC Berkeley and UCLA tied at No. 6 with UC San Diego ranking 14th, UC Davis 16th and UC Santa Barbara 22nd. In the medium colleges and universities rankings, UC Santa Cruz placed 6th. In addition, there are hundreds of UC employees and current students who made their way to the university after their Peace Corps service ended, holding onto the idea of continuing a life of public service.

Some were driven to join the Peace Corps by the desire to travel to exotic places; others by adventure; others still by the passion to be of service. Whatever their initial motivations, all leave their Peace Crops service with a profoundly changed view of the world and themselves.

"As a result of my service in the Peace Corps, I do believe that I've lived its original goals of contributing skills and expertise, learning about another people and culture, and bringing that learning back home," says Jeff Mitchell, an agriculture extension plant specialist at UC Davis who served in Botswana from 1978 to 1982.

"I have a better understanding and sense about the lives of folks in that region of the world and also a greater respect for the challenges they face," Mitchell said. "In my own small way perhaps, I might have contributed to the educational development of this country at a time in its history when it needed such help."

Mitchell taught in a government secondary school that took in boarders from all parts of the country. He had planned on going to law school after his term was up. Instead, he earned master's and doctoral degrees in agricultural science at UC Davis with the idea of working in international development.

"As things have turned out, I've pretty much dedicated myself to research, teaching and extension education work right here in California," he said. "But I have also had opportunities to contribute indirectly to international development goals."

Give a man a fish pond

Kristen Bole, a media relations specialist at UC San Francisco, served in the Central African Republic from 1986 to 1988 as an inland fisheries volunteer, teaching farmers how to raise fish. "Not just giving them a fish," she said. "Or teaching them to fish, but actually teaching them how to build a pond and raise fish."

Like most Peace Corps volunteers, she found herself getting involved in projects outside her actual assignment, like helping women build fuel-efficient woodstoves and working in the local clinic.

"I think Peace Corps volunteers get far more out of their experience than they actually give to the host country," Bole said. "We all go over with the sense that we're going to 'help' and have an impact, but you realize once you're there that the problems you thought you could solve are immense and incredibly complex, and that your greatest contribution is entirely personal and has nothing to do with your initial assignment."

About a week before Bole left Africa, she went to visit a friend who was a prostitute. As she was leaving the visit, the woman asked if Bole would do her a favor.

"After two years of being asked daily for money or candy or my hand in marriage, I groaned inside at one more request, but tried to smile and ask what she wanted. She said, 'Could you teach me to read before you go?' "

Just about the time Bole was finishing her Peace Corps service, Catherine Thomsen, now a public health project leader with the UC-managed California Breast Cancer Research Program, was heading for Costa Rica where she served from 1988 to '92, half of that time in an isolated village near the Nicaraguan border. She learned everything from making tamales to playing the guitar so she could teach songs to the children in the kindergarten she created. But she learned a lot more than cooking and musical skills.

"There were moments of challenge and frustration," she said. "It took time and effort. That was an important lesson I learned, to sit back and listen more."

When she asked the people what they wanted to learn, they told her they wanted information about nutrition and how to keep their children from catching colds and flu. She helped organize a government speaker series to bring that educational material to the village. Thomsen then worked as a Peace Corps volunteer with the USAID traveling around Costa Rica working with other volunteers. One of her projects was the opening of a brick schoolhouse in a town where children had been sitting on logs in a lean-to.

UC Davis alumnus Robert Griffiths taught English in a community school in Kenya, 20 kilometers north of Lake Victoria. The school received no government support, so the headmaster would kick students out of class until their families could pay the fees.

Griffiths had eight students who were particularly bright but also poor enough to be regularly kicked out of school. Griffiths' mother worked at an office at Stanford where he had had a summer job. He asked the people in the office for small donations of $10 to help pay the fees, which they were able to do for a year until the students completed secondary school.

"About 10 years later, I went back to visit my school and tracked down many of these eight students," Griffiths said. "Seven of them had completed at least a bachelor's degree at the university."

One got a master's degree and published poetry in Swahili. His youngest sister is named Patricia, after Griffiths mother. Another was teaching math and physics at a government high school.

"He proudly introduced me to the rest of the staff in the teachers' room, telling them that I had helped him get an education and succeed in his life," said Griffiths, who teaches English as a second language and job skills to adults at the downtown campus of the City College of San Francisco.

Ariana Metchik, a 2005 UCLA graduate, spent two years as a community health educator in Mauritania, a West African Islamic country bordered by Senegal, Malawi and Algeria. She worked on AIDS education and polio immunization programs, organized traditional midwife training and started a health club for elementary students. But living in a patriarchal community where women had few rights was bit of a culture shock, she said — one that inspired her to start a literacy program for the women in her village, most of whom had never seen a written word. By the time she left her post in 2007, they hadn't exactly learned to read and write, she said, "but there was a whole group of women who thought there were possibilities for themselves. I think they loved learning, and I think it instilled in them the idea of a world where their daughters could learn."

Metchik, who is now working in a UCLA substance abuse research program while applying to medical schools, met her boyfriend in the Peace Corps. Fellow Mauritania volunteer Keith Gaddis, now a UCLA doctoral student in ecology and evolution, lived in the regional capital of Atar and worked with the mayor's office on setting up a trash disposal plan for the town. He later moved to the national capital and worked on after school mentoring programs for high school girls. He doubled the number of mentoring centers to 16 and started 10 more for elementary school students.

"It humbled me," Gaddis said. "At the same time it gave me a lot more confidence. It made me feel like I was resourceful."

Changes that last a lifetime

Bryant Wieneke, a UC Riverside alumnus, served as a Peace Corps volunteer in Niger teaching, in French, at an agricultural school from 1974 to 1976. The fact that he knew nothing about farming and didn't speak French gave him the confidence, he said, to think nothing is impossible.

"Another lasting effect of the Peace Corps for me was that it was the beginning of a rich life of service, which is the most rewarding way to make a living in my opinion," said Wieneke, now an assistant dean for policy in the UC Santa Barbara College of Letters and Science. "I have never been on the front lines, saving lives as a doctor or nurse or even teaching in a classroom, but I have a role at the university that makes me feel as if I'm making a contribution to young people and our society. ... My life in public service emanated from my Peace Corps experience, and I wouldn't trade it for anything."