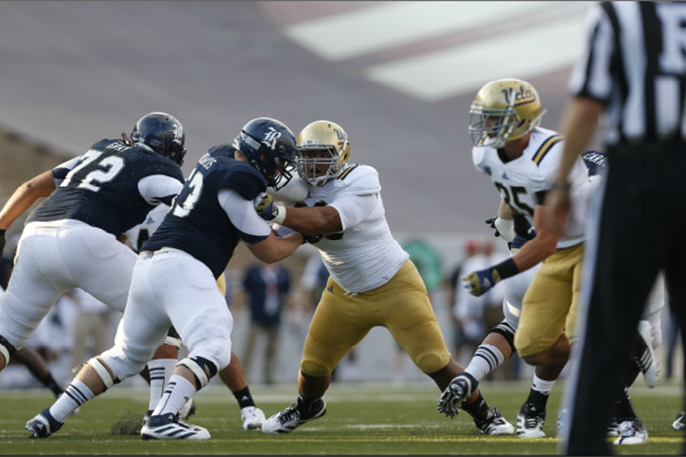 A few decades ago, when a football player got his “bell rung” with a hard hit to the head, he would shake it off, take smelling salts and return to the game.

The University of Michigan faced outrage last year for allowing a quarterback to return to a game after a violent helmet-to-helmet hit. In March, a top National Football League rookie retired because of concerns about long-term effects of brain injuries. Concussions have even caught the attention of Hollywood, with Will Smith starring in a film that opens Dec. 25 about the life and work of the UC Davis pathologist who first discovered chronic traumatic brain injuries in professional football players.

It’s not just football. With fall sports in full swing, concerns are mounting about concussions in youth and adult sports from soccer to water polo.

“When I was growing up, people had to get knocked out to have a concussion,” said Dr. Christopher Giza, a professor of neurosurgery and pediatric neurology who directs the UCLA Steve Tisch BrainSPORT Program. “We’re certainly much more aware now. We have a better understanding of what a concussion is.”

From expanding awareness in youth sports to conducting groundbreaking studies of collegiate athletes and military personnel, University of California experts are on the front lines of advancing knowledge about traumatic brain injury and improving care. Their efforts are helping to shed light on ways to diagnose, treat and prevent concussions for athletes of all ages.

What is a concussion?

A concussion is a brain movement injury that results from the brain being hit or moved too quickly.

“Your brain is made kind of like Jell-O — it floats in fluid inside the skull and when the skull moves quickly, the brain can jostle around. It can wiggle, shake, just like a piece of Jell-O on a plate,” Giza explained. “When that happens, you can develop neurological symptoms.”

Signs of a concussion include headache, dizziness, nausea, vomiting, looking “out of it,” being slow to talk, confused, disoriented, having slurred speech, loss of coordination, memory loss or any period of unconsciousness. You don’t have to be knocked out to suffer a concussion: Less than 10 percent of concussions involve loss of consciousness.

An estimated 1.6 million to 3.8 million sports- and recreation-related concussions occur in the U.S. each year, according to the Centers for Disease Control and Prevention. The vast majority of people who suffer a concussion get better within a few weeks.

“Most concussions are recoverable,” Giza said.

But concussions can be difficult to identify and some people suffer more serious symptoms, particularly after multiple concussions.

Lab studies have shown a “window of vulnerability” after a first concussion, Giza said. Concussed athletes are three to six times more likely to get another concussion. If they rush back to play, their reflexes, reaction time and thinking may be slower, putting them at risk of a second concussion and longer recovery period.

The key is to get proper medical care and follow guidelines on returning to play.

“When in doubt, sit them out,” Giza said. “There’s no single test to diagnose a concussion. It’s best to have multiple tests.”

A week after Giza did a baseline assessment this spring of junior high boys lacrosse players, one of those boys suffered a concussion and showed up at a UCLA clinic with his frightened parents. Giza, who treated the boy, remembered from his baseline assessment that he had signs in his history that showed he might be at risk for a longer recovery from a head injury.

“I immediately recognized him, and he recognized me,” Giza said. “He had a concussion. Right away I knew things that would affect his treatment. When his balance wasn’t right, it was easy to show him. The treatment plan was tailored to his risk factors.”

Last year, the NCAA and Department of Defense launched the most comprehensive study of concussion and head impact exposure ever conducted. UCLA is participating in the three-year study, a $30 million effort that aims to enroll 37,000 student-athletes. Participants will receive a comprehensive preseason evaluation for concussion and be monitored through the season. So far, there have been more than 7,000 baseline assessments and 250 reported concussions.

“In one year, this is already the largest prospective study of concussions ever,” Giza said. “This can really be a defining moment in our understanding of concussions in humans.”

Dr. John DiFiori, UCLA Athletics head team physician and chief of the Division of Sports Medicine, is collaborating with Giza on the NCAA-DoD study.

“One of the most difficult decisions with a concussion is determining safe return to play,” DiFiori said. “Through the study, we’ll have a better idea to know when the brain is fully recovered. That’s what I call the Holy Grail of concussion management: to know when it’s safe to return to play.”

UCLA’s coaches and student-athletes have been very supportive of the study, said DiFiori, team physician for the Bruins’ football and men’s basketball programs.

“As team physicians, we are on the sidelines, diagnosing concussion, removing the athlete from play and monitoring their condition. Any athlete diagnosed with a concussion is removed from that contest. We then perform daily evaluations over the ensuing days to weeks to gauge when it is appropriate to return to play,” DiFiori said. “It’s most important that the decision on when to return to the field is one that minimizes their risk of another concussion. It’s better to miss one game than to miss a whole season.”

UCLA has been at the forefront of care for concussions – its multidisciplinary expertise made it one of four sites participating in both the clinical study and advanced research cores of the NCAA-DoD study, DiFiori said.

The study could help provide objective measures for determining when it’s safe to play again, he said. For the study, UCLA football players are wearing sensors in their helmets and those who have concussions will receive blood tests for brain biomarkers and multimodal MRI exams.

“The research is very exciting,” DiFiori said. “There is clearly a need for more research to provide evidence that will help guide safe return to play.”

Over the past seven years, nearly 100 UC investigators from eight campuses have conducted more than 330 research projects in brain injury and traumatic brain injury (TBI), receiving more than $150 million in funding support for both basic research and clinical trials.

“The traumatic brain injury field has come to the very clear recognition that this is such a complicated problem, not one university, not one investigator is going to figure this out,” said UC San Francisco neurosurgeon Dr. Geoffrey Manley. “We all believe that by working together and collaborating, we’re going to get there faster. If anybody can do this, the University of California can.”

Since 2009, Manley and UCSF colleague Dr. Pratik Mukherjee have helped lay the groundwork for TBI research by gathering common data across research sites.

The NIH-funded study, known as TRACK-TBI, uses a “precision medicine approach to understand traumatic brain injury across the spectrum from concussion to coma,” Manley said.

Current diagnostic tools are outdated, Manley said. The researchers aim to improve diagnosis and treatment of TBI, which frequently is undiagnosed, misdiagnosed, inadequately understood and undertreated, according to Manley.

“We currently use the coma score that was developed 40 years ago to classify patients,” Manley said. “When people say, ‘I got my bell rung,’ they’re actually saying that they had an event that altered their consciousness. Even just saying they had a concussion, it’s very nebulous. The purpose of this study is to move beyond calling this a concussion or mild traumatic brain injury and create a better classification of traumatic brain injury.”

Manley, who also is co-investigator on a companion Department of Defense-funded study as well as another supported by the NCAA, hopes to find out more about the role of MRI scanning in brain injury and if blood-based biomarkers could be developed to diagnose TBI.

TBI indirect and direct medical costs are about $77 billion a year in the U.S., but NIH spends only $88 million a year on TBI research, compared with more than $5 billion on cancer, $3 billion on HIV/AIDS and $2 billion on cardiovascular disease. TBI is “woefully underfunded,” Manley said.

Manley led the care for Bryan Stow, the San Francisco Giants fan who suffered severe head injuries in 2011 when he was beaten up after a baseball game between the Giants and the Los Angeles Dodgers.

“Bryan’s medical bills and ongoing cost of care total about $5 million,” Manley said. “Take that $5 million for Bryan and figure we spent $88 million on research. That’s not too many Bryan Stows. I have a Bryan Stow that comes to our hospital every week.”

Dr. Murray Stein of UC San Diego, who collaborates with Manley on TRACK-TBI, has worked on multiple traumatic brain injury studies with the military, which is looking to establish better concussion prevention, protection and treatment methods for its personnel.

Stein, Distinguished Professor of Psychiatry, Family Medicine and Public Health, recently published data from a study of 8,000 soldiers who were tracked before and after being deployed to Afghanistan. Nearly 1 in 5 soldiers experienced a new concussion while deployed, and those who did had twice the risk for mental health issues, Stein said. About half of soldiers come into the military already having suffered a concussion, he added.

“Concussions are really common,” Stein said. “They’re common in the military and in the general public. There’s a lot more awareness now. We need the science to catch up in how to treat and prevent concussions.”

Stein co-leads the Army Study to Assess Risk and Resilience in Servicemembers, the largest study of mental health risk and resilience ever conducted among military personnel.

“A lot of people who sustain concussions also seem to have post-traumatic stress disorder and vice versa,” Stein said.

While the vast majority of people recover after a concussion, some suffer mental health problems such as anxiety, depression and PTSD.

These affiliated problems often go undiagnosed during initial treatment, Stein said. “They can show up one year later.”

A multisite DoD study offers hope in treating people with concussions and PTSD. The study included small clinical trials on people who have had concussions and cognitive complaints. They tried two drugs and found promising results with methylphenidate (Ritalin), normally used to treat people with attention deficit hyperactivity disorder. They want to do a larger trial with that drug.

“It’s exciting because there hasn’t been any drug found that has been shown to be useful to treat traumatic brain injury,” Stein said. “There’s nothing that’s FDA approved.”

From treatment to identification

UC Davis experts also are on the cutting edge of identifying TBI, from using biometrics for TBI probability testing during Aggie football games to adding a neurosurgeon to the on-the-field medical team who can assess players’ injuries during home football games.

Omalu – whose discovery is the focus of a major motion picture, “Concussion,” that opens Dec. 25 – and UCLA colleagues were the first to image concussion-related abnormal brain proteins in retired professional football players. They have completed two studies of retired professional football players to help detect and track possible chronic traumatic encephalopathy in living people. They want to follow that up with a phase three clinical trial. Omalu also would like to see additional studies into treatments of the disease.

“I wish and hope someday soon we will have a cure,” Omalu said.

Over the past seven years, nearly 100 UC investigators from eight campuses have conducted more than 330 research projects in brain injury and traumatic brain injury (TBI). Some key projects involving UC researchers include: