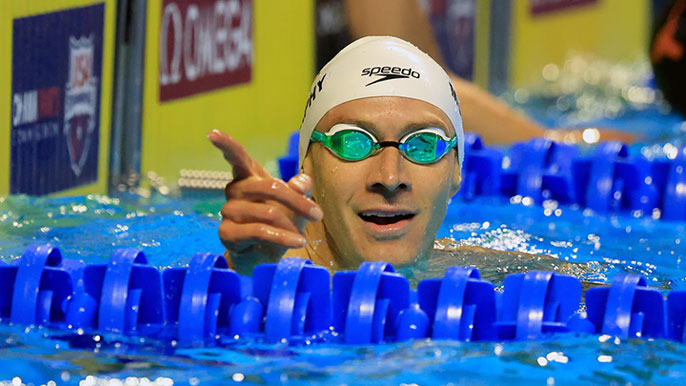 After a triumphant Olympic debut in Rio in 2016, Ryan Murphy is back to defend his 100-meter and 200-meter backstroke titles. Sweeping both events again is a feat accomplished once before, by East Germany’s Roland Matthes (1968, 1972), regarded by many as the best male backstroke swimmer of all time.

UC at the Olympics by the numbers

Click here to jump to our UC Olympian roster, including coaches and staff.

They’ve had to wait an agonizingly long time to get to Tokyo, but for 110 UC athletes, Friday, July 23, marks a moment many of them have been dreaming of for a lifetime.

For some, this is the first chance to perform on such a massive stage. For others, it’s a hard-fought return to the spotlight. For UC, it’s a moment to celebrate: 130 athletes, coaches, physicians and staff from seven campuses are attending the Summer Games, representing 29 countries in 18 sports. Due to COVID-19 restrictions, they won’t be able to hear friends and family cheering from the stands — but there will be no such restrictions on cheering ardently at home. Win or lose, they are already Olympians and exemplify the Olympic credo: "The important thing in life is not the triumph, but the fight; the essential thing is not to have won, but to have fought well."

Here are a handful of storylines to watch in a few of the events featuring UC students, staff and alums. A full roster of UC athletes, coaches and staff is available below.

UC Berkeley has one of the most prolific swimming programs in the country, and it shows — no less than 16 swimmers will be representing eight countries at the 2020 Games! Most of these swimmers are new to the Olympic pool, but three members of the UC Berkeley contingent that brought home an astounding 19 medals in 2016 (all for Team USA) will return for another lap in Tokyo.

Ryan Murphy, already a three-time gold medalist, is now a captain for Team USA swimming and will be defending his Olympic titles in the 100-meter and 200-meter backstroke. Already part of an elite group of swimmers that have qualified for events in two consecutive Olympics, Murphy will exceed all-time great Aaron Piersol if he can repeat in both events.

Teammate Tom Shields, a 2016 Rio gold medalist in the 400-meter medley relay, is also returning, this time to swim the 100-meter butterfly. Shields’ presence at these Games is itself a victory — in late 2018, Shields attempted suicide, surviving thanks to his wife, Gianna. He has since begun speaking openly about his struggles with depression and mental health in the hopes of helping others. His surprise qualification in the 100-meter butterfly event is a credit to his remarkable resiliency.

Abbey Weitzeil was only a freshman when she won a gold medal in the 400-meter medley and a silver in the 400-meter relay back in Rio. Now an alum, she will be competing in a slew of events, showcasing the freestyle skills she hopes will earn her an individual gold in the 50- or 100-meter events.

Olympic newbies include Katie McLaughlin, who lost out on a chance to qualify for the last Summer Games due to a freak injury. She will make her debut in the women’s 4x200 free relay, expected to be a fevered race against Australia for gold. She talks about how much it means to make the team below:

At poolside, look for our two UC Berkeley swimming head coaches: UC Irvine alum David Durden, now head coach of the U.S. Olympic men’s swim team following his success as assistant coach in the Rio Games; and assistant coach Teri McKeever, the first-ever female head coach for the U.S. women’s Olympic team in 2012 who will be coaching again in 2020, this time as an assistant to Team USA.

“You can be whoever you want to be” is exemplified by Izzy Connor, the 21-year-old who is now the first UC Santa Cruz athlete to ever compete in the Olympic Games. Go Banana Slugs! Connor is not only part of Team USA’s five-member rhythmic gymnastics group; she is also an incoming freshman who intends to study astrophysics and pursue writing, particularly about issues close to her, like anxiety, which she compares to a physical injury that needs work to heal.

“I strongly believe you don’t fully start to know yourself or grow as a person until you’ve gone through something that breaks you,” Connor said of her struggles. “That’s when you start to grow and progress as a person.”

Her passion for the event compelled her to stick with it and now she will get to show the world the artistry of her sport as a result. “I went through my career setting small goals fueled by the love I have for what I do,” Connor wrote on Instagram, “and suddenly looked up and found myself at the doorstep of the Olympics.”

Led by the otherworldly Simone Biles, U.S. women’s gymnastics touches down in Tokyo with one burning question: Can they win a third consecutive team gold? If so, they will join the storied company of the “Fierce Five,” the 2012 squad featuring UCLA gymnast Kyla Ross, and the “Final Five,” the 2016 squad featuring UCLA gymnast Madison Kocian. The women’s first competition is July 25, but they already have one thing in common with these earlier teams: drawing from the incredible talent pool of UCLA gymnastics. Incoming freshman Jordan Chiles secured her place on the squad with top 3 performances in multiple events at the Olympic trials, while fellow incoming freshman Emma Malabuyo clinched a spot as an alternate. UCLA gymnasts will compete for other teams as well: incoming freshman Brooklyn Moors will represent Team Canada and alum Danusia Francis will represent Jamaica. At least one UCLA gymnast has competed at every Olympics since 1984.

While the UCLA gymnastics program often grabs the headlines (even in non-Olympic years, as Kaitlyn Ohashi and Nia Dennis show), they aren’t the only UC representatives in Tokyo. Charlotte Drury, a UC Irvine 2021 grad, is Team USA’s second alternate in trampoline, and Dr. Marcia Faustin, of UC Davis, will be on the sidelines as co-head team physician for the U.S. women to help get them back on their feet, should they need it.

Women’s soccer — with players from UCLA and UC Berkeley — kicked off the competition on July 21, even before the opening ceremony. Unfortunately, the U.S. women’s team had their first defeat since 2019, snapping a 44-game winning streak against their nemesis, Sweden. Ouch.

But nobody’s giving up just yet. The U.S. women can still advance from their group with strong showings against Australia and New Zealand. UC Berkeley’s Alex Morgan will look to recapture the winning formula in those upcoming matches with her fellow UC alums in the starting 11, UCLA’s Samantha Mewis and Abby Dahlkemper. But they will have their hands full facing Teagan Micah of Australia (UCLA) and Daisy Cleverley and Betsy Hassett of New Zealand (UC Berkeley) in their remaining group matches. If they succeed, Team Canada, featuring UCLA alum Jessie Fleming, may await them on the other side.

Could UCLA’s Jrue Holiday have a better summer? On Tuesday, he helped deliver the first NBA championship in 50 years to the city of Milwaukee as the Bucks’ starting point guard. On Friday, he will board a plane with teammate Khris Middleton and NBA finals foe Devin Booker to try and nab a 16th Olympic men’s basketball gold for the United States. In Tokyo, he will meet up with fellow UCLA alum Zach LaVine (Kevin Love pulled out from injury). The two never shared a court together at UCLA, so fans of the campus’ storied basketball program are in for a treat.

While they won’t meet him in a preliminary game, the UCLA duo could meet UC Davis’ Hugh Watanabe (as an Aggie he competed under the surname Hogland) when he plays for Japan in a knockout game. Watanabe holds dual citizenship with the U.S. and Japan, and the opportunity to play for one of his home countries, at home, will undoubtedly be special. The UCLA duo could also face off against UC Santa Barbara alum Gabe Vincent, the Nigerian guard who plays for the Miami Heat. Given that the U.S. men were recently stunned in an exhibition loss to Nigeria, it may or may not be an appetizing prospect for them. John Rillie, assistant coach for the UC Santa Barbara men’s basketball team, will be helping coach the Australian men’s team, who also shocked the U.S. in an exhibition game in the lead up to the Olympics. An ill portent, or an opportunity for revenge?

Three UCLA women will also be playing basketball in Tokyo; they are Nirra Fields for Canada, Atonye Nyingifa for Nigeria and Angela Dugalić for Serbia. The U.S. typically dominates the event, but Canada could surprise — Fields already has golds from the Pan American Games in 2015 and the FIBA Women's AmeriCup in 2017 to prove it.

UC Irvine water polo head coach Dan Klatt is hoping to help his team cement their place in history in Tokyo. An assistant coach for the past two gold medal-winning women’s teams, he is working alongside UC Berkeley’s Chris Oeding and under UCLA alum and head water polo coach Adam Krikorian to try to steer them to a third. Establishing dominance in any sport is hard, but luckily for Klatt, four of his assistant coaches at Irvine will be going for gold in the pool: Jamie Neushul, Melissa Seidemann, Alys Williams and Kaleigh Gilchrist. Gilchrist scored six goals on the way to her first medal in Rio; she and Seidemann, who scored three goals in Rio, can show the newbies the ropes. If Seidemann and Klatt can make it to the top of the podium again it will be an extraordinary moment for both of them; Seidemann has competed in the pool in every Olympics Klatt has coached.

Check out our list of Olympic athletes, coaches and staff below to learn more about who is in Tokyo. Names underlined have links to profile pages where more information is provided.