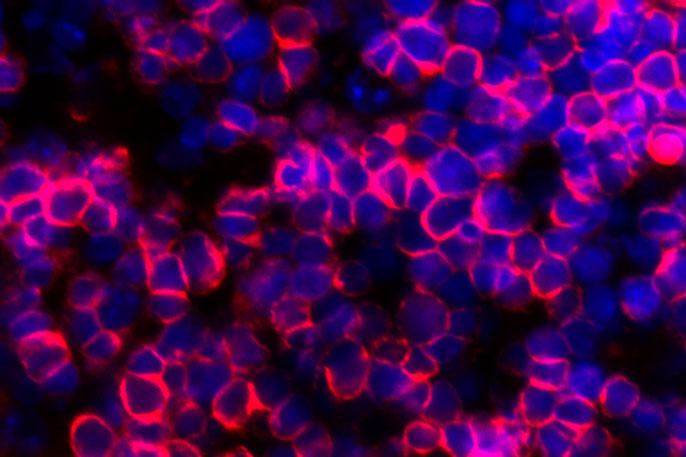 UCLA researchers have created a new system to produce human T cells, the white blood cells that fight against disease-causing intruders in the body. The system could be utilized to engineer T cells to find and attack cancer cells, which means it could be an important step toward generating a readily available supply of T cells for treating many different types of cancer.

The preclinical study, published in the journal Nature Methods, was led by senior authors Dr. Gay Crooks, a professor of pathology and laboratory medicine and of pediatrics and co-director of the Eli and Edythe Broad Center of Regenerative Medicine and Stem Cell Research at UCLA, and Amelie Montel-Hagen, an associate project scientist in Crooks’ lab.

The thymus sits in the front of the heart and plays a central role in the immune system. It uses blood stem cells to make T cells, which help the body fight infections and have the ability to eliminate cancer cells. However, as people age or become ill, the thymus isn’t as efficient at making T cells.

T cells generated in the thymus acquire specialized molecules, called receptors, on their surface, and those receptors help T cells seek out and destroy virus-infected cells or cancer cells. Leveraging that process has emerged as a promising area of cancer research: Scientists have found that arming large numbers of T cells with specific cancer-finding receptors — a method known as adoptive T cell immunotherapy — has shown remarkable results in clinical trials.

Adoptive T cell immunotherapy typically involves collecting T cells from people who have cancer, engineering them in the lab with a cancer-finding receptor and transfusing the cells back into the patient.

However, adoptive T cell immunotherapy treatments can be time-consuming, and people with cancer might not have enough T cells for the approach to work, according to Dr. Christopher Seet, the study’s first author and a clinical instructor who treats cancer patients in the division of hematology-oncology at UCLA.

A major leap in immunotherapy

Since adoptive T cell immunotherapy was first used clinically in 2006, scientists have recognized that it would be more efficient to create a readily available supply of T cells from donated blood cells or from pluripotent stem cells, which can create any cell type in the body. The challenge with that strategy would be that T cells created using this approach would carry receptors that are not matched to each individual patient, which could ultimately cause the patient’s body to reject the transplanted cells or could cause the T cells to target healthy tissue in addition to cancer cells.

“We know that the key to creating a consistent and safe supply of cancer-fighting T cells would be to control the process in a way that deactivates all T cell receptors in the transplanted cells, except for the cancer-fighting receptors,” Crooks said.

The UCLA team used a new combination of ingredients to create structures called artificial thymic organoids that, like the thymus, have the ability to produce T cells from blood stem cells. The scientists found that mature T cells created in the artificial thymic organoids carried a diverse range of T cell receptors and worked similarly to the T cells that a normal thymus produces.

Next, the team tested whether artificial thymic organoids could produce the specialized T cells with cancer-fighting T cell receptors. When they inserted a gene that delivers a cancer-fighting receptor to the blood stem cells, they found that the thymic organoids produced large numbers of cancer-specific T cells, and that all other T cell receptors were turned off. The results suggest that the cells could potentially be used to fight cancer without the risk of T cells attacking healthy tissue.

Montel-Hagen said the artificial thymic organoid can easily be reproduced by other scientists who study T cell development. The UCLA researchers now are looking into using the system with pluripotent stem cells, which could produce a consistent supply of cancer-fighting T cells for patients in need of immediate lifesaving treatment.

Kite Pharma holds a license to the artificial thymic organoid method, which is patented by the Regents of the University of California.