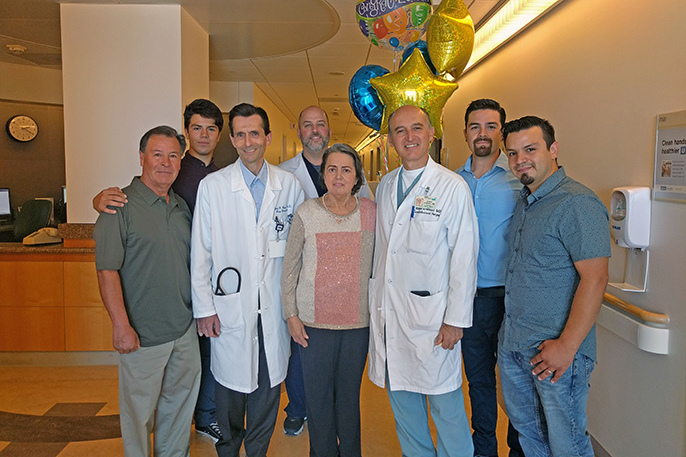 Elba De Contreras, the recipient of the 1,000th lung transplant performed at UCLA, along with members of her family and her transplant team.

The UCLA Lung Transplant Program performed its 1,000th transplant surgery in mid-September, becoming the first program on the West Coast, and one of only seven centers nationwide, to achieve this milestone.

The recipient of the donor lungs was Elba De Contreras, 59, from Goleta, who suffered from idiopathic pulmonary fibrosis and pulmonary hypertension. The six-hour surgery took place at Ronald Reagan UCLA Medical Center, led by Dr. Abbas Ardehali, surgical director of the lung and heart transplant programs.

De Contreras, who relied on an oxygen tank prior to her surgery, is recuperating well and said she feels happy and energetic. With three sons and four grandkids, De Contreras said she looks forward to resuming her social life. Her husband, Willy, said that the donor lungs have given his wife “new life” and she looks 20 years younger.

“This is a big milestone for UCLA’s lung transplant program” said Ardehali, a professor of cardiothoracic surgery. “Achieving 1,000 lung transplants is a reflection of the experience and dedication of our team.”

Lung transplantation has come a long way since UCLA performed its first operation in 1988. While the procedure used to have a significant morbidity rate, as new techniques were developed the 30-day survival rate improved dramatically, reaching 98 percent at UCLA currently, compared with the national average of 96.5 percent.

These advances in patient outcomes are attributable to several factors, including the improvement of how donor lungs are managed and procured, advances in surgical techniques, better perioperative care and anti-rejection medications and changes in the national organ sharing allocation system.

UCLA is a leader in testing new technology that uses an experimental mobile organ care system to analyze donor lungs while the lungs are being transported to the patient who will receive the lungs. The researchers in the program also conduct studies looking for new strategies to treat chronic rejection.

The UCLA program is the busiest thoracic transplant center in the West and the second busiest in the country. It is renowned for its ability to handle the most difficult cases.

The program is also known for accepting people who need transplants who might be rejected at other centers and for successfully using donor lungs that might be rejected by other programs. This means patients can be offered transplantation sooner — with less time waiting for a lung and lower waiting-list mortality than national averages.

“Our patients get exceptional care from a team of experienced specialists who are part of a large transplant community within UCLA Health,” said Dr. David Ross, medical director of the lung transplant program. “We look forward to utilizing this depth of knowledge to help our future patients suffering from end-stage lung disease.”

De Contreras, who did not know she was UCLA’s 1,000th patient until after her surgery, feels lucky to have been given the gift of life.