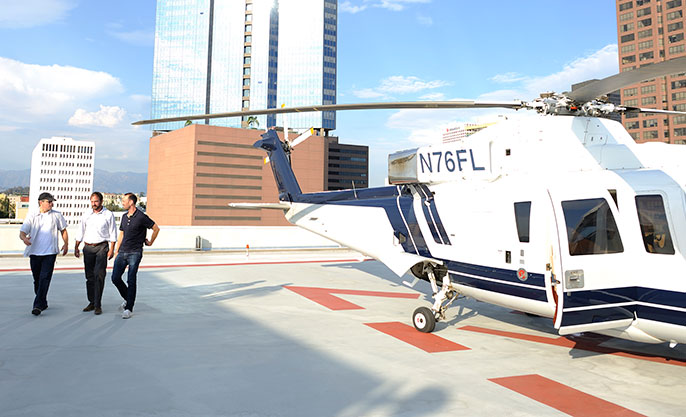 Matt Damon (left), Dr. George Luber and UCLA professor Alex Hall get ready to take to the skies as part of the Showtime series "Years of Living Dangerously."

When UCLA professor Alex Hall considered all the different ways he might one day be educating people about climate change, flying over Los Angeles in a helicopter with actor Matt Damon and a documentary crew was absolutely nowhere on his list.

“I would have envisioned an interview in my office or standing in front a melting glacier, but not that,” said Hall, a professor in UCLA’s Department of Atmospheric and Oceanic Sciences and Institute of Environment and Sustainability who appears in the next episode of “Years of Living Dangerously,” airing June 2 on Showtime at 8 p.m.

“Although I’d never have imagined doing an interview from a helicopter, it was actually a great idea,” he admitted. “To show people what’s really going on in terms of regional climate change, you need to give them a bird’s-eye view.”

The nine-part series explores how climate change is affecting people from different walks of life from around the globe. Executive producers on the show are James Cameron, Jerry Weintraub and former Gov. Arnold Schwarzenegger, along with Emmy winners and former “60 Minutes” producers Joel Bach and David Gelber, and climate expert Daniel Abbasi. In addition to Damon, other A-list correspondents include Jessica Alba, Don Cheadle, Harrison Ford and Olivia Munn, to name a few.

“[This series] is our effort to invite Americans and others around the world to take a fresh look at climate change so they can truly understand — with their hearts as well as their minds — the profound stakes, the unmistakable urgency and the need to direct their leaders to do the right thing,” said Abbasi.

From the comfort of the sky, Hall and Damon, along with Dr. George Luber from the Centers for Disease Control in Atlanta, discuss the public health impact of heat waves as the helicopter sweeps across Los Angeles.

“Matt was great,” said Hall. “He was very well-informed and knew how to elicit interesting responses. He was a really good interviewer.”

“The Los Angeles region is unique because it’s an area of complex coastlines and topography,” said Hall, adding that the close proximity between ocean, mountains, and flat and valley regions is rare, as is the fact that this major metropolis is situated in one of the world’s major biodiversity hotspots.

“This complexity creates a variety of micro-climates, and each experiences climate change differently,” he said. For example, despite the relatively close proximity between the coast, the city’s downtown core and the San Fernando Valley, each locale differs when it comes to changes in environmental factors such as temperature, air quality, and the number of plant and animal species.

“Alex's work is unique in downscaling Los Angeles, which helped us localize the impacts of temperature and heat," said show producer Sabrina McCormick. "It was an amazing moment when Alex was in the helicopter with Matt Damon, and he projected the future increase in extreme heat that will impact Matt's children and future generations in L.A.”

Although Hall is the only UCLA researcher involved with this television series, he is just one of many with a vested interest in Los Angeles’ environmental future. He, along with a number of other UCLA experts from a multitude of campus departments, have committed themselves to participating in UCLA’s first Grand Challenge, a goal to create a more sustainable Los Angeles by finding ways for the region to operate solely on renewable energy and local water by 2050 while protecting biodiversity and enhancing quality of life.

In addition to sharing L.A.’s story, the series also explores how climate change is impacting forests in Indonesia, ice melt in Greenland and national sovereignty in the Middle East. Closer to home, the series also draws attention to the increasing number of wildfires in the American West, drought in the Southwest and the rebuilding of communities in the aftermath of Hurricane Sandy.

Hall said that one of the big hurdles in communicating about climate change is making the issue understandable, relevant and compelling to audiences. He believes that “Years of Living Dangerously” serves as a vehicle for discussion and makes the issues relevant to those who may not fully understand the case being made by climate change scientists.

“I don’t think anything like this has been done before,” said Hall of the series that “captures the ferment of climate change on the ground and in different regions around the world, and how this issue is being confronted by people.

“It gives a very new perspective on the problem,” he said.