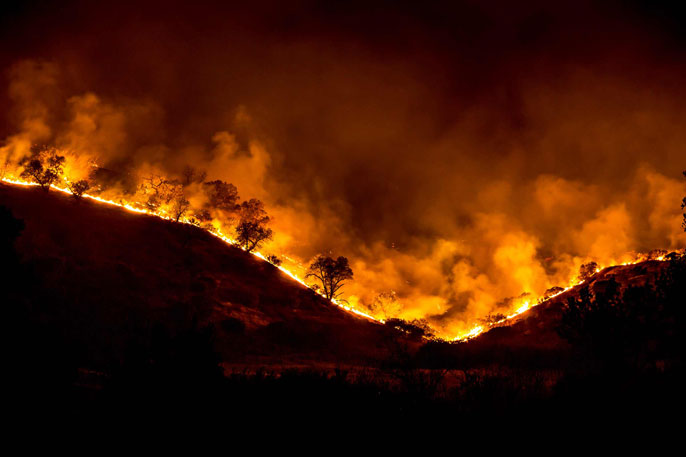 As if to keep up with the growing frequency and intensity of wildfires throughout California, a network of wildfire-spotting cameras grew from 35 stations last year to more than 300 as of late October.

The ALERTWildfire system co-developed by UC San Diego is one of several products created by the university that are improving the technological capability of western states to deal with wildfires now that the once-rare catastrophic events are becoming commonplace.

ALERTWildfire joins projects such as WIFIRE and UC San Diego research studies that consider everything from the geographic extent of respiratory health problems caused by wildfires to the tension between the government entities that pay for disasters and those that set building codes in high-fire danger zones. Now that worst-case scenarios appear to be a new mainstay for the foreseeable future, the focus is on minimizing the damage as early as possible.

“Every fire starts out small,” said Neal Driscoll, a geoscientist at Scripps Institution of Oceanography. “If we can get on top of them in their incipient phase, we have the opportunity to stay on offense.”

So far, 2019 has produced blazes that rival 2018’s Paradise Fire and the Thomas Fire of 2017. But researchers like Driscoll see that technology is making a difference. He and colleagues from the University of Nevada, Reno have converted what started out as a backcountry observational network meant to monitor seismic activity into a system that gives fire officials eyes on fires from the moment of their inception. They plan to grow the ALERTWildfire network to 1,000 stations within the next two years.

The cameras have been rapidly adopted by fire agencies. Ben Nicholls, a California Department of Forestry and Fire Protection (CAL FIRE) division chief in Sonoma County, told the New York Times that each one of those devices is “worth its weight in gold.” Nicholls’ unit has used the cameras to confirm 911 calls and pinpoint the exact location of the fire to prevent firefighters from driving around wasting valuable time. In San Diego, CAL FIRE spokesperson Thomas Shoots has said “having these cameras is kind of like having a second set of eyes for us.”

“Having these cameras is kind of like having a second set of eyes for us.”
–CAL FIRE spokesperson Thomas Shoots

In 2017, when there were only a handful of cameras throughout California, Oregon, Nevada, and Washington, 44 people died as a result of wildfires. So far this year, there have been no fatalities to date — even with the speed at which blazes like the Kincaid fire in Sonoma County have spread. Driscoll believes at least part of that is attributable to ALERTWildfire, which gives fire officials the ability to take control of cameras in the network to track nascent fires. In the case of the Kincaid fire, CAL FIRE officials were monitoring the fire within 11 minutes of its first ignition and combining that information with humidity and wind data to order immediate evacuations in its vicinity.

State officials have used ALERTWildfire in combination with other tools such as WIFIRE developed by researchers at the Qualcomm Institute, the San Diego Supercomputer Center (SDSC), and the Mechanical and Aerospace Engineering (MAE) department at UC San Diego.

The National Science Foundation-funded technology spots wildfires before they get out of control using data from satellites and sensors deployed in the field. The goal of WIFIRE leaders is to build a fleet of drones that can work in unison to map an area in real time, monitor environmental conditions such as temperature, humidity, wind, and air quality and provide early warning to state foresters, fire departments and wildfire prevention agencies.

“The WIFIRE models and satellite images give a good global overview for wildfire tracking, but they don’t allow us to see under the canopy or under the clouds. So, the idea here is to deploy a team of small robots to zoom in and collect more localized measurements and adaptively assess if there’s an area of interest,” Atanasov said.

Atanasov is working with UC San Diego computer science and engineering professors Tajana Rosing and Sicun (Sean) Gao. The project is still in its early stages. The team is in the process of developing algorithms and software to optimize drone mapping and coordination, as well as setting up the hardware and sensors. The researchers will next be gearing up the drones for initial flight tests in parts of San Diego.

While interest in UC San Diego’s WIFIRE Lab project has been steadily increasing among the state’s disaster prevention authorities and other organizations, that level of activity has seen a sharp rise with the now-seemingly endless wildfire season currently gripping many parts of California.

“WIFIRE was created to integrate real-time information about wildfires, and to use such information for predictive fire behavior modeling,” said Ilkay Altintas, Chief Data Science Officer at SDSC and principal investigator for the WIFIRE project, started under a multi-year $2.65 million National Science Foundation grant.

Predictive analytics techniques — now used with real-time data analysis — were recently used by firefighting authorities in a majority of the fires in Southern California over the last two months, including the Palisades and Getty fires. This data-driven approach to response is thanks to a 150-day statewide pilot program called FIRIS (Fire Integrated Real-Time Intelligence System), launched in September under state funding secured by Assemblywoman Cottie Petrie-Norris (D-Laguna Beach).

As a member of FIRIS, the WIFIRE Lab at SDSC provides real-time fire spread projections for up to six hours based on fire perimeter data collected by aircraft. These projections are coordinated through a fusion center staffed with experts to provide decision support based on the perimeters for fire suppression and management actions by firefighters.

“For the first time in history, the WIFIRE Lab receives fire perimeters from a fixed-wing aircraft outfitted with infrared capabilities in real-time after an almost immediate dispatch on request,” said Altintas. “Although we have been collecting information from many sources before, we didn’t have high-quality, real-time perimeter information at the speed we wanted.”

The need for such data-rich resources to help mitigate natural disasters has increased with the number and intensity of wildfires in recent years. California alone saw nearly 1.7 million acres burned across the state in 2018.

“Human beings can probably do anything computers can do, but not at the speed and scale that computers can achieve,” noted Altintas. “Such public/private partnerships are what the state needs to collectively and collaboratively find answers to the growing challenges in hazards mitigation, monitoring, and response.”

Participants in the WIFIRE Lab include researchers from SDSC and other UC San Diego areas including the Qualcomm Institute, Scripps Institution of Oceanography and the Mechanical and Aerospace Engineering (MAE) department at the university’s Jacobs School of Engineering.

The Qualcomm Institute’s Jessica Block, who serves as a senior research associate for the institute, is the associate director of the WIFIRE Lab. She is an interdisciplinary geologist and urban ecologist specializing in the use of sensor networks, remote sensing and geospatial visualization tools for disaster response, natural resource management, policy decision-making and sustainability.

Block was recently appointed to the California Wildfire Safety Advisory Board by Gov. Gavin Newsom. The board, created in July, is comprised of independent expert advisors who will advise a new Wildfire Safety Division within the California Public Utilities Commission on wildfire safety measures, including plans written by utilities, so the CPUC can more effectively regulate the safety of investor-owned utilities, according to the Governor’s office.

“A lot of the software systems used for fire simulation today require a lot of manual input," said Block in a UCTV interview. "The way that WIFIRE works is automating a lot of that, so that you don’t have to coordinate and specify a bunch of data sets that are already there for you. That makes the system faster and it can work for you.”

While UC San Diego researchers are concerned with real-time knowledge, others are looking ahead at how California should move forward coping with a new climate-change driven reality. Scripps researchers, for instance, recently reported that Santa Ana wind activity is projected to decrease in frequency in the fall and spring but not in peak intensity. This effectively narrows the Santa Ana wind season around its historical peak in December. These results, together with a projected later start to the wet season, suggest a later and possibly more intense wildfire season in the future with dry vegetation persisting into December when back-to-back Santa Ana wind events are common and wildfires can burn longer and bigger. The 2017 Thomas Fire is an example of a late-season wildfire that grew to unprecedented proportions when it was fanned by back-to-back Santa Ana winds.

Rosana Aguilera, a postdoctoral researcher at Scripps, has been a part of that effort but is also considering the downwind effects of wildfires. Specifically, she and colleagues are exploring how fine particulate matter (PM2.5) in wildfire smoke affects public health. Though it is well established that smoke can exacerbate a range of respiratory problems, little work to date has looked at isolating and studying the impacts of wildfire-specific PM2.5. Aguilera, Scripps climate scientist Alexander Gershunov, and epidemiologist Tarik Benmarhnia, who has a joint appointment between Scripps and the School of Medicine, are using major Santa Ana wind-driven wildfires from 2003 and 2008 to trace the effects of fine-particle pollution and their spatio-temporal evolution.

“Most studies looking at health effects of wildfires offer global estimates for a wildfire event and/or region,” said Aguilera. “We are looking at both the temporal and spatial distribution of hospital admissions within Southern California.”

Judson Boomhower is a UC San Diego environmental economist examining a range of wildfire-related issues, many dealing with the different motivations public entities have to reduce the risk of damage and loss in the future. For instance, cities and counties typically control the zoning decisions that allow homes to be built in high fire risk areas. Agencies such as the U.S. Forest Service, though, shoulder most of the costs of protecting homes in those areas from wildfire. It prompts the question of whether federal agencies should have more of a say in where houses get built or whether cities should assume more liability for their zoning decisions.

“This is a setting where there are all kinds of incentive issues cutting in all directions and it’s important for policymakers to be aware of those,” said Boomhower, an assistant professor in the UC San Diego Department of Economics. “There’s room to get serious about building codes and to think seriously about where we permit new development.”

If you are interested in interviewing UC experts or learning more about these ongoing projects, please contact Stett Holbrook (stett.holbrook@ucop.edu).