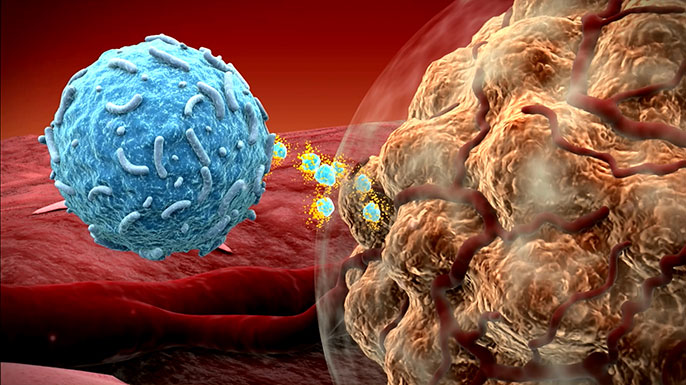 Bluestone, who was named this month to a Blue Ribbon Panel that will help to guide Vice President Joe Biden’s National Cancer Moonshot Initiative, remains A.W. and Mary Margaret Clausen Distinguished Professor at UCSF, and will continue to oversee an active research program at the university.

The UCSF center will be directed by Lewis Lanier, Ph.D., the J. Michael Bishop, M.D., Distinguished Professor and chair of UCSF’s Department of Microbiology and Immunology, which is ranked #2 worldwide by U.S. News and World Report.

The Parker Institute’s goal is to accelerate the development of breakthrough immune therapies capable of turning cancer into a curable disease by ensuring the coordination and collaboration of the field’s top researchers and quickly translating their findings into patient treatments.

The Parker Institute includes over 40 laboratories and more than 300 researchers from the country’s top cancer centers.

Each Parker Institute center has received initial funding of $10 million to $15 million, investments that will continue to grow on an annual basis through additional project grants, shared resources and central funding.

“We are at an inflection point in cancer research and now is the time to maximize immunotherapy’s unique potential to transform all cancers into manageable diseases, saving millions of lives,” said Parker, president of The Parker Foundation. “We believe that the creation of a new funding and research model can overcome many of the obstacles that currently prevent research breakthroughs. Working closely with our scientists and more than 30 industry partners, the Parker Institute is positioned to broadly disseminate discoveries and, most importantly, more rapidly deliver treatments to patients.”

While at the University of Chicago in the mid-1990s, Bluestone and colleagues discovered that a protein called CTLA-4 can act as a checkpoint, or “brake,” on the immune response. This work formed the basis for the development of checkpoint-blockade drugs, therapies that have been much in the news for achieving dramatic remissions of advanced cancers in some patients, particularly in cases of melanoma, lung cancer and kidney cancer. New checkpoint inhibitors are now in development for virtually all types of cancer.

“Immunotherapy represents a fundamentally new, breakthrough treatment paradigm in the fight against cancer – it harnesses the body’s own powerful immune system to mobilize its highly refined disease-fighting arsenal to engage and eliminate the cancer cells,” said Bluestone. A former executive vice chancellor and provost at UCSF, Bluestone was the founder and served for 10 years as director of the Immune Tolerance Network, the largest NIH-funded multicenter clinical immunology research program. “Parker Institute scientists at all six centers are leaders in the field and will now work together to make discoveries to treat and potentially cure cancer.”

Parker Institute centers have access to dedicated research and clinical resources, as well as to key technologies needed to accelerate research discoveries in cancer immunotherapy. In a unique agreement among the centers, the administration of intellectual property will be shared, enabling all researchers to have immediate access to a broad swath of core discoveries.

“The Parker Institute is unique in that it makes it possible for scientists to mobilize resources quickly when they have an exciting new idea, and to begin experiments to test that idea as rapidly as possible,” said Lanier, who leads the Cancer, Immunity, and Microenvironment Program at the UCSF Helen Diller Family Comprehensive Cancer Center. “This entrepreneurial mindset should considerably accelerate progress in immunotherapy, a field with immense promise for cancer patients.”

The Parker Institute’s emphasis on collaboration will also speed up research, Lanier said, citing the fact that only about 20 percent of patients with certain types of cancer respond to checkpoint-blockade drugs. “Though these drugs have led to dramatic cancer remissions in many patients, finding out how to increase the response rate is a major goal in the field. By amassing patient data from six centers, we can figure out that question six times as quickly.”

“Immunotherapies are changing the paradigm for how we treat patients with cancer,” said Fong, the Efim Guzik Distinguished Professor in Cancer Biology, and a cancer immunotherapy pioneer. “I believe they will prove valuable in treating many, if not most, types of cancer. In the context of clinical trials, we aim to provide access to novel immunotherapies that patients otherwise would not have access to.”

“Cancer immunotherapy is a transformative approach to treating cancer, and we at UCSF are thrilled to be part of this unique nationwide alliance of top cancer centers,” Ashworth said. “By joining forces with other researchers, our scientists can make discoveries more rapidly, and our physicians can offer their patients access to the newest cancer immunotherapies and clinical trials.”

The Parker Institute center is the latest in a series of investments made by The Parker Foundation to advance research at UCSF. In July, 2015 the foundation donated $4.5 million to UCSF’s Global Health Group to develop innovative and aggressive approaches to combat the mosquito species that transmits malaria. In November, 2015 a $10 million gift from the Foundation established the Sean N. Parker Autoimmune Research Laboratory, in which Bluestone leads research on diseases such at type 1 diabetes.

“With his generosity and creativity, Sean Parker has backed some of the most dynamic research programs at UCSF,” said Chancellor Sam Hawgood, M.B.B.S. “The Parker Institute for Cancer Immunotherapy, including its affiliated center on our campus, is Sean’s boldest initiative to date, and we are proud to play important roles in this nationwide effort that will profoundly transform the understanding and treatment of cancer.”