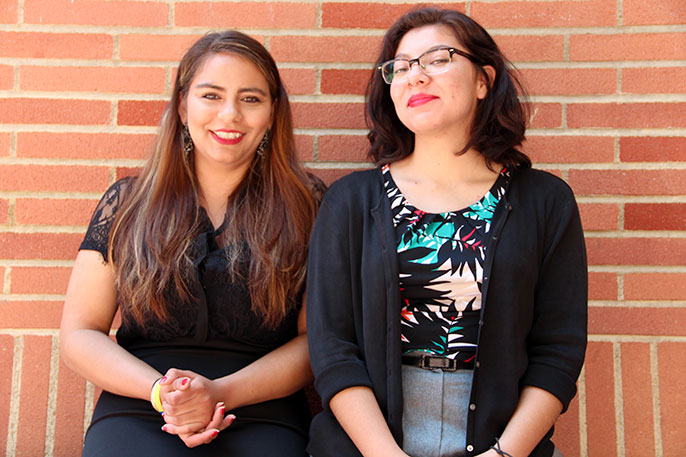 Teresa Contreras, left, and Yesenia Aguilar are among the first students to enroll in UCLA’s new UndocuBruins Research Program.

Mornings always carried a hint of sadness and fear when Yesenia Aguilar was younger.

Watching her parents prepare for work every day, Aguilar wished their factory jobs offered a better environment. And because they were undocumented immigrants, the fear of deportation was constant. Motivated by what she saw and now a UCLA junior, Aguilar is studying what drives people like her parents to toil so hard in factories, especially in those where substandard conditions, sexual harassment and hours of repetitive work are commonplace.

“How is it that people continue to show up each day working in settings like this?” said Aguilar, who also worked in a factory to help support her family and pay for her education.

Aguilar is part of a new undergraduate research program at UCLA that provides juniors and seniors who are undocumented with financial support to conduct meaningful research during two consecutive quarters and encourages them to pursue graduate studies. The UndocuBruins Research Program, funded by the University of California Office of the President, welcomed its first cohort in winter 2015. The students hail from Mexico, Columbia and the Philippines.

“Until this year, there were no introductory research programs at UCLA directly serving and guiding undocumented students,” said Charles Alexander, associate vice provost for student diversity in the UCLA College and director of the Academic Advancement Program, which administers UndocuBruins.

UndocuBruins, which is modeled after the federally funded McNair Research Scholars Program, is the first research program centered on the sensitivity of immigration status, said Yadira Valencia, a UCLA alumna and UCLA graduate student in education who serves as the UndocuBruins cohort coordinator. It is open to students in all disciplines.

“Having this program, for many of them, is changing their future when it comes to their education and goals,” Valencia said.

Research topics include support groups for undocumented Asian Americans, the effects of the Deferred Action for Parental Accountability (DAPA) program and its implementation, the correlation between documentation status and chronic illnesses, and drug-related murders in Juarez, Mexico.

Aguilar, a psychology major who was born in Mexico and grew up in El Monte, California, learned about the UndocuBruins program during an information session organized by the Academic Advancement Program at the beginning of the fall 2014 quarter.

“It has definitely helped me set up my track here at UCLA,” said Aguilar, a third-year psychology major who transferred from Rio Hondo College. “I don’t know what I would do without this program.”

Aguilar said UndocuBruins encourages the exploration of topics and populations that are rarely examined.

“It is important to study these populations because research simply isn’t being done within these groups,” said Aguilar, who has secured a research assistant position with a UCLA professor this summer. “A lot of the literature, especially in psychology, never relates to the people I’ve been around.”

She is moved by the work of her peers and proud to be a member of this research program.

“Seeing what they’ve been doing has been humbling and inspiring,” Aguilar said. “Being undocumented hasn’t been a limitation; it’s pushing us more.”

That push to achieve is something that fascinates fellow UndocuBruins participant Teresa Contreras. Like Aguilar, she was born in Mexico, grew up in El Monte and faced some early hurdles in school, including language barriers, poverty and bullying by her peers. Instead of letting circumstances ruin her chances of a good education, she used them to fuel her ambition and prove to those around her that she could thrive.

“My parents kept saying, ‘You have a future. School is going to be your future,’” Contreras said. “It was always in my head that school was going to be my way out of the situation we were living in.”

Recognizing that her family couldn’t afford to send her to a four-year college, Contreras enrolled at Mount San Antonio College in Walnut, California, which is 26 miles east of downtown Los Angeles. There, she completed studies in journalism and communication.

On the day she graduated from Mount San Antonio — June 15, 2012 — President Barack Obama signed the Deferred Action for Childhood Arrivals (DACA) program into law. “For me, that was a sign.”

Contreras enrolled full-time at UCLA a year later, majoring in Chicano/a studies and minoring in education.

Her UndocuBruins research examines how the stigma of being an undocumented student serves as a motivator to excel academically.

“This research is obviously very personal, and I hope to find out things about myself in the process,” said Contreras, a departmental scholar who would like to one day work as an immigration lawyer.

Contreras said that most of the students she surveyed for her project, despite having lived in the United States since childhood, don’t identify as American or as being from their country of origin.

“They identify as being undocumented,” Contreras said.

The program creates a place where their goals and ambitions are validated and acknowledged, she said.

“This program has helped me to realize that I am a good student and this isn’t the end for me,” said Contreras. “With Yadira emphasizing Ph.D. all the time, it has allowed me to really be open-minded about my future. It’s gratifying knowing that I have that support.”