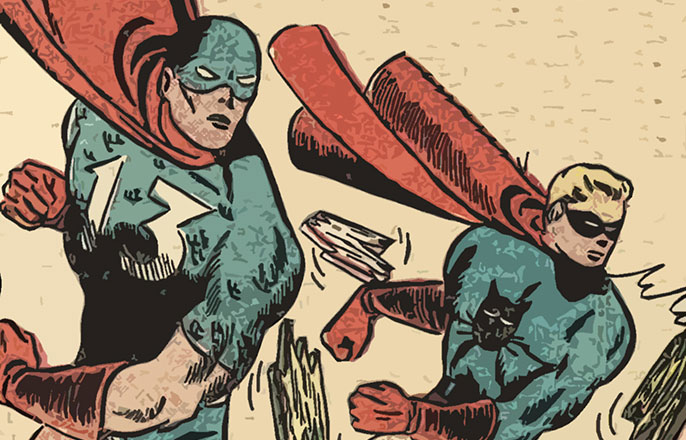 Ever wonder whether Captain America’s “vibranium alloy” shield actually could absorb kinetic energy, or whether Iron Man’s weaponized “repulsor beam” could deliver such concussive force? Thanks to Ricardo Castro, an associate professor in the UC Davis Department of Chemical Engineering and Materials Science, the scientific credibility of such fanciful superhero physics can be analyzed in his new winter quarter freshman materials science course: EMS 2, Materials Marvels: The Science of Superheroes.

As originally conceived, many superheroes — such as Superman and the Hulk — boasted powers that clearly defied reality. Freshmen engineering students may be surprised to learn, however, that scientific progress is catching up with at least some of the gadgets currently fueling the characters in today’s movies and comic books.

Consider, as one example, the “arc reactor” that powers Iron Man’s suit.

“It’s a stretch of the truth,” Castro admits, with a smile, “but the concept — radioactive decay — is sound.”

A creative approach to materials science

The class began as a pilot program during Winter Quarter 2015, with a roster of 78 students. With EMS 2 now an official College of Engineering course, Castro hopes to draw at least 150 students: a goal he’s certain to achieve, thanks to a recent piece on Sacramento’s Channel 10 news.

Castro joined the UC Davis College of Engineering faculty in March 2009, after earning his doctorate in metallurgical and materials engineering at Brazil’s University of Sao Paulo. He quickly caught the attention of the U.S. Department of Energy’s Office of Science, which in 2011 presented him with an Early Career Research Program Award.

In the spring of 2015, Castro received the North American Calorimetry Conference’s James J. Christensen Award, for his ” outstanding innovative contributions to the development and use of calorimetric instrumentation: the science of measuring the heat developed during a mechanical, electrical or chemical reaction, and of calculating the heat capacity of materials.”

Castro’s research centers on the thermodynamic understanding of nanoceramics, and in establishing correlations with processing, stability of the nanoscale, and application. He’s particularly interested in the behavior of nanoceramics in extreme environments, such as high temperatures and nuclear radiation. He attempts to predict such behavior, and then “tune” the environments to induce specific thermodynamic conditions that shift the nano-behavior. His research group has developed unique calorimetric strategies to measure interface energetics, enabling an ever-expanding understanding of nano-phenomena.