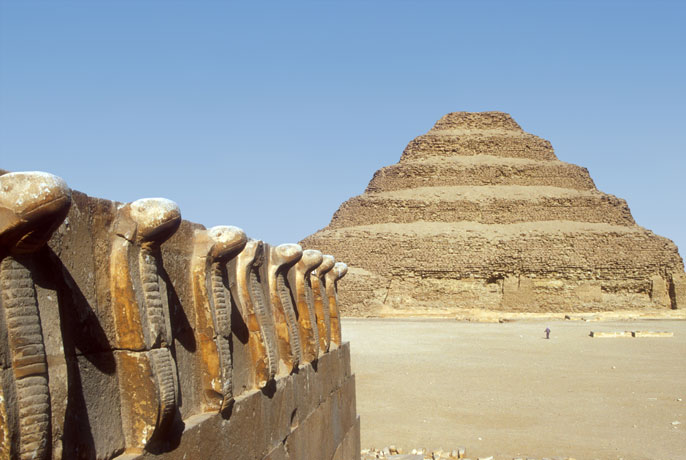 The oldest standing step pyramid in Egypt, designed by Imhotep for King Djoser, located in Saqqara, an ancient burial ground at 30 km south of modern-day Cairo.

The ancient Egyptian burial site of Saqqara has been studied for more than a century, due to the importance of the location for political, religious and architectural history. One of the country’s most popular tourist destinations, it is a designated UNESCO World Heritage Site.

But a new “born-digital” publication by UC Santa Cruz associate history professor Elaine Sullivan takes a fresh look at the region to demonstrate how the site has evolved over more than 2,500 years.

Titled “Constructing the Sacred: Visibility and Ritual Landscape at the Egyptian Necropolis of Saqqara” — it has just been published by Stanford University Press, as part of their new series of monographs and scholarly publications.

Sullivan’s project uses 3-D technologies to enhance Geographic Information Systems (GIS) — one of the prevalent formats for data organization in modern archaeology — in order to create interactive models that can be navigated through space and time to explore the Egyptian site.

Her publication is among the first to push the boundaries to include interactive 3-D models that can be navigated both spatially and temporally.

“Ancient landscapes are a major focus of study in the field of archaeology, with dozens of publications appearing annually on the interaction between humans, culture, and the natural and built environment at sites around the world,” said Sullivan. “While clearly of great interest to scholars, these past places remain elusive. The archaeological sites we visit today are palimpsests — the result of thousands of years of change, both architectural and environmental.”

Sullivan noted that due to significant modification and degradation, direct field observation of embodied past spaces is often impossible today.

“Building superstructures have collapsed or been remodeled, monuments have been purposefully modified or destroyed, rivers have shifted, and lakes have disappeared,” said Sullivan. “In Egypt, for example, the Nile river has shifted course, and meters of sand from the Sahara desert have covered ancient buildings. At most long-lived ancient sites, it is difficult to reimagine so many layers of change simultaneously. My born-digital monograph presents an innovative methodology for examining such landscape change at ancient sites — a view only possible to attain with the aid of new technologies.”

Sullivan pointed out that the 3-D environment in her project allows the researcher to examine the site from an explicitly human point-of-view, and to question how cultural symbolism or importance was embedded within the lived landscape.

“I consider myself a 'digital humanist,' a scholar that is interested in exploring the potential of digital technologies for the Humanities,” said Sullivan. “As a historian, I'm focused on understanding the human experience in the past through the examination of text, art, architecture, and other forms of material culture. But although people in the past lived in a three-dimensional world, we generally communicate our research about them in 2-D. That leaves out a lot of important information.”

“So a number of scholars have taken on the challenge of re-thinking aspects of the humanities to include a richer level of information that tries to incorporate three-dimensional objects and spaces and change over time,” she added. “I'm just one of many people experimenting with new ways to use digital tools to record and communicate aspects of history.”

Sullivan joined the UC Santa Cruz faculty in 2013. Her field experience in Egypt includes five seasons of excavation with Johns Hopkins University at the temple of the goddess Mut (Luxor), as well as four seasons in the field with a UCLA project in the Egyptian Fayum, at the Greco-Roman town of Karanis.

She received her M.A. and Ph.D. in Egyptian art and archaeology from Johns Hopkins University, and her B.A. in history from Duke University.

“In my time at UC Santa Cruz, I've focused on building our Digital Humanities programs,” said Sullivan. “McHenry library now has a digital scholarship commons, where students from my undergraduate classes, for example, have used virtual reality headsets to walk through an Egyptian tomb we are studying in class. In spring quarter, I am co-teaching (with Professor Zac Zimmer in Literature) UC Santa Cruz's first graduate course in Digital Humanities. We want our graduate students to be engaged with these developments and ready to incorporate digital technologies into their own research, when appropriate.”

Sullivan will also be the UC Santa Cruz faculty leader on an alumni trip to Egypt this summer through the campus’s Inspired Expeditions program.

"I'm really excited about this opportunity because I love sharing my passion for Egypt and its incredible cultural heritage with others,” said Sullivan. “I studied abroad at the American University in Cairo when I was an undergraduate, and I've spent many months on excavations, living in Luxor and the Fayum oasis. I think Egypt is one of the most incredible places in the world.”