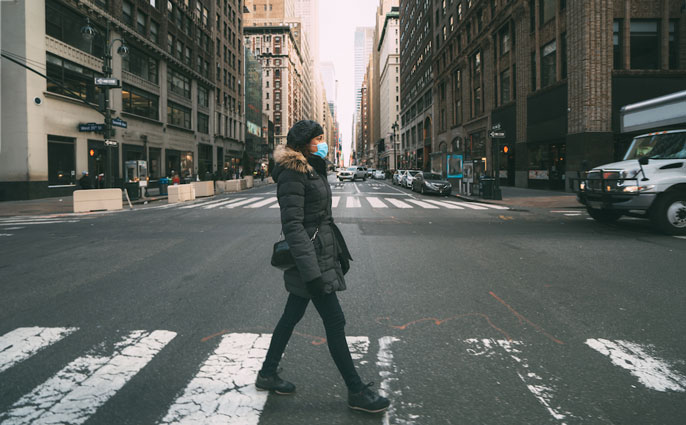 Berkeley Lab researchers have launched a project to determine if the novel coronavirus might be seasonal, waning in summer months and resurging in fall and winter.

One of the many unanswered scientific questions about COVID-19 is whether it is seasonal like the flu — waning in warm summer months then resurging in the fall and winter.

Now scientists at Lawrence Berkeley National Laboratory (Berkeley Lab) are launching a project to apply machine-learning methods to a plethora of health and environmental datasets, combined with high-resolution climate models and seasonal forecasts, to tease out the answer.

“Environmental variables, such as temperature, humidity, and UV [ultraviolet radiation] exposure, can have an effect on the virus directly, in terms of its viability. They can also affect the transmission of the virus and the formation of aerosols,” said Berkeley Lab scientist Eoin Brodie, the project lead. “We will use state-of-the-art machine-learning methods to separate the contributions of social factors from the environmental factors to attempt to identify those environmental variables to which disease dynamics are most sensitive.”

The research team will take advantage of an abundance of health data available at the county level — such as the severity, distribution and duration of the COVID-19 outbreak, as well as what public health interventions were implemented when — along with demographics, climate and weather factors, and, thanks to smartphone data, population mobility dynamics. The initial goal of the research is to predict — for each county in the United States — how environmental factors influence the transmission of the SARS-CoV-2 virus, which causes COVID-19.

Multidisciplinary team for a complex problem

Untangling environmental factors from social and health factors is a knotty problem with a large number of variables, all interacting in different ways. On top of that, climate and weather affect not only the virus but also human physiology and behavior. For example, people may spend more or less time indoors, depending on the weather; and their immune systems may also change with the seasons.

It’s a complex data problem similar to others tackled by Berkeley Lab’s researchers studying systems like watersheds and agriculture; the challenge involves integrating data across scales to make predictions at the local level. “Downscaling of climate information is something that we routinely do to understand how climate impacts ecosystem processes,” Brodie said. “It involves the same types of variables — temperature, humidity, solar radiation.”

Brodie, deputy director of Berkeley Lab’s Climate and Ecosystem Sciences Division, is leading a cross-disciplinary team of Lab scientists with expertise in climate modeling, data analytics, machine learning, and geospatial analytics. Ben Brown, a computational biologist in Berkeley Lab’s Biosciences Area, is leading the machine-learning analysis. One of their main aims is to understand how climate and weather interact with societal factors.

“We don’t necessarily expect climate to be a massive or dominant effect in and of itself. It’s not going to trump which city shut down when,” Brown said. “But there may be some really important interactions [between the variables]. Looking at New York and California for example, even accounting for the differences between the timing of state-instituted interventions, the death rate in New York may be four times higher than in California — though additional testing on random samples of the population is needed to know for sure. Understanding the environmental interactions may help explain why these patterns appear to be emerging. This is a quintessential problem for machine learning and AI [artificial intelligence].”

The computing work will be conducted at the National Energy Research Scientific Computing Center (NERSC), a DOE Office of Science user facility located at Berkeley Lab.

Already, geographical differences in how the disease behaves have been reported, the researchers point out. Temperature, humidity, and the UV Index have all been statistically associated with rates of COVID-19 transmission — although contact rates are still the dominant influence on the spread of disease. In the southern hemisphere, for example, where it’s currently fall, disease spread has been slower than in the northern hemisphere. “There’s potentially other factors associated with that,” Brodie said. “The question is, when the southern hemisphere moves into winter, will there be an increase in transmission rate, or will fall and winter 2020 lead to a resurgence across the U.S. in the absence of interventions?”

Brown notes other experiments suggesting the SARS-CoV-2 virus could be seasonal. In particular, the National Biodefense Analysis and Countermeasures Center (NBACC) assessed the longevity of the virus on various surfaces. “Under sunlight and humidity, they found that the virus loses viability in under 60 minutes,” Brown said. “But in darkness and low temperatures it’s stable for eight days. There’s some really serious differences that need investigating.”

The Berkeley Lab team believes that enough data may now be available to determine what environmental factors may influence the virulence of the virus. “Now we should have enough data from around the world to really make an assessment,” Brown said.

The team hopes to have the first phase of their analysis available by late summer or early fall. The next phase will be to make projections under different scenarios, which could aid in public health decisions.

“We would use models to project forward, with different weather scenarios, different health intervention scenarios — such as continued social distancing or whether there are vaccines or some level of herd immunity — in different parts of the country. For example, we hope to be able to say, if you have kids going back to school under this type of environment, the climate and weather in this zone will influence the potential transmission by this amount,” Brodie explained. “That will be a longer-term task for us to accomplish.”

This research is supported by Berkeley Lab’s Laboratory Directed Research and Development (LDRD) program. Other team members include Dan Feldman, Zhao Hao, Chaincy Kuo, Haruko Wainwright, and Nicola Falco. Berkeley Lab mobilized quickly to provide LDRD funding for several research projects to address the COVID-19 pandemic, including one on text mining scientific literature and another on indoor transmission of the virus.