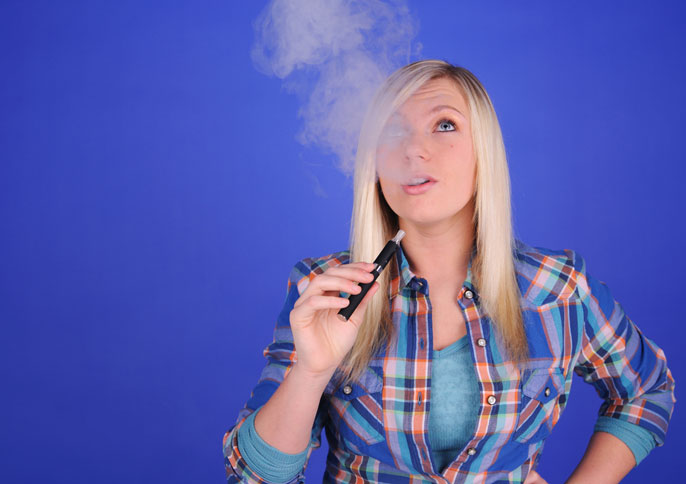 Teen vaping by the numbers

Approximately 3 million U.S. middle and high school students use e-cigarettes, according to the Centers for Disease Control and Prevention.

The tide may be turning — teen use of e-cigarettes decreased in 2016, according to a Monitoring the Future report.

Did you know? UC banned e-cigarettes under its smoke- and tobacco-free policy.

With catchy names like Smurf Cake and Unicorn Puke and sweet flavors like bubble gum and strawberry, electronic cigarettes may have special appeal to young people, but that doesn’t mean they are safe.

Evidence is mounting that e-cigarettes are exposing a new generation to nicotine addiction and may be leading users toward a cigarette habit. As a result, the U.S. surgeon general last month issued a report declaring youth e-cigarette use “a  major public health concern.”

“All Americans need to know that e-cigarettes are dangerous to youth and young adults,” said Surgeon General Vivek Murthy, in releasing the report. “Any tobacco use, including e-cigarettes, is a health threat, particularly to young people.”

The battery-powered devices heat a liquid typically containing nicotine mixed with the chemicals propylene glycol and glycerin as well as flavorings to deliver an aerosol inhaled by the user. While e-cigarettes deliver nicotine without the tar and smoke of traditional tobacco cigarettes, they still are considered tobacco products.

But their healthy halo has helped propel their popularity: E-cigarettes are now so popular that more American youth vape than smoke cigarettes. In just a decade, e-cigarettes have become a multibillion-dollar business led by multinational tobacco companies with outlets not just online but everywhere from vape shops to convenience stores and retail giants like Wal-Mart.

Ads tout them as a cool, harmless alternative to cigarettes. E-cigarette users, or vapers, have contests to see who can blow the largest cloud of vapor.

But there’s more to e-cigarettes than meets the eye. The surgeon general’s report aligns with increasing scrutiny of e-cigarettes, from new regulations to a growing body of research into health effects.

Here are 10 things to know about e-cigarettes:

A lot of the kids who take up vaping are at low risk for smoking, but once they start using e-cigarettes, they are three to four times more likely to start using cigarettes, Glantz said.

“The biggest health concern with e-cigarettes is they are prolonging and expanding the tobacco industry,” Glantz said.

Glantz, director of UCSF’s Center for Tobacco Control Research and Education, said he was initially neutral on e-cigarettes, but now finds them concerning. Among other hazards, e-cigarettes produce ultrafine particles than can trigger inflammatory problems and lead to heart and lung disease.

E-cigarettes are billed as producing “harmless water vapor,” but, strictly speaking, the vapor produced when users exhale is actually an aerosol that contains a mixture of nicotine, flavorings and other ingredients that can be toxic.

The flavors can be toxic

More than 7,000 varieties of flavored e-cigarettes are on the market.

UC Riverside professor of cell biology Prue Talbot screened the cytotoxicity (quality of being toxic to cells) of 36 refill fluids and found that some were highly toxic. The most cytotoxic flavor, Cinnamon Ceylon, contained a chemical called cinnamaldehyde, which gives cinnamon its flavor and whose side effects may include coughing and sore throats. Talbot has been studying more flavors and is building a database to help determine the most dangerous ones.

“Flavors are something that could be potentially regulated,” Talbot said.

Vaping has secondhand and thirdhand effects

Unlike cigarettes, which emit smoke from the lit end, e-cigarettes don’t produce sidestream emissions between puffs, but they still generate secondhand and thirdhand effects when users exhale the mainstream vapor.

In a TRDRP-funded study, Berkeley Lab researcher Hugo Destaillats led a team that found 31 chemicals that include several toxicants at significant levels in e-cigarette vapor. The most toxic chemicals included acrolein, a severe eye and respiratory irritant; and formaldehyde, an irritant and probable carcinogen.

Emissions varied by type of device and voltage.

“The way you heat the liquid drastically determines if you produce a lot of compounds or just a few,” Destaillats said. “As you increase the voltage, toxic byproduct concentrations increase exponentially.”

The batteries can explode

There were 134 reports of e-cigarette batteries overheating, catching fire or exploding between 2009 and January 2016, according to the Food and Drug Administration, which will host a public workshop in April to gather information about e-cigarette battery safety concerns.

E-cigarette batteries “can explode without notice,” Talbot said. “People can be quite severely injured.”

E-liquids are poisonous if swallowed

Calls to poison control centers about e-cigarette exposure in young children have skyrocketed nationally in recent years. In California, the number of calls involving e-cigarettes increased from 19 in 2012 to 243 in 2014, according to the UC-administered California Poison Control System. More than 60 percent of those e-cigarette calls were related to nicotine poisoning in children 5 and under.

“If you are a middle-aged person who has been smoking for 20 years, maybe it is good to switch to e-cigarettes,” Destaillats said. “But if you are a teenager and never have smoked, then it is not a good idea to use e-cigarettes.”

The minimum age has risen

In June, California became the nation’s second state, following Hawaii, to raise the minimum age for tobacco sales to 21, and for the first time added e-cigarettes to the definition of tobacco products. In August, the FDA extended its tobacco oversight to e-cigarettes, banning sales to those under 18.

“It sends a message to youth that e-cigarettes are in the same category of all tobacco products,” Halpern-Felsher said.

E-cigarettes will be taxed

Under Proposition 56, the tobacco tax passed by California voters in November, the state will tax e-cigarettes for the first time, starting April 1. It’s estimated that the price of a typical 30-milliliter bottle of e-liquid could increase to about $30 from $20.

The tax revenue will enhance education efforts by boosting funding for the state Tobacco Control Program. The surgeon general’s report also will make it easier for states to integrate e-cigarettes into tobacco education campaigns and could lead to more regulations, Glantz said.

E-cigarettes may be safer than cigarettes, but unknown risks remain

“It’s often assumed that e-cigarettes are safer than cigarettes, but that could be an incorrect assumption,” Talbot said. “We don’t yet know the long-term health effects of e-cigarettes.”

Decades of research have helped scientists determine that cigarette smoke creates more than 7,000 chemicals, at least 69 of which are known to cause cancer and many of which are poisonous.

He estimates that e-cigarettes are about one-third to one-half as dangerous as cigarettes.

In other words, they are still plenty dangerous.