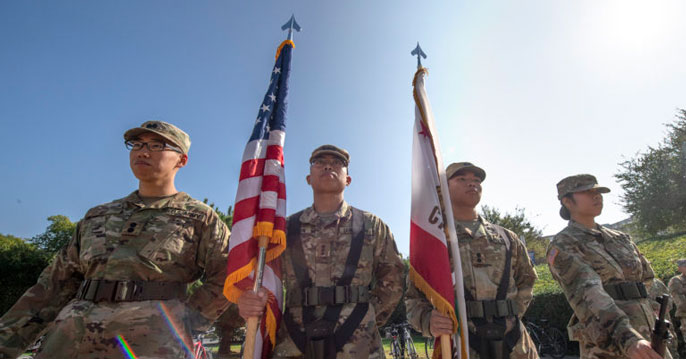 The UC Irvine ROTC color guard participates in the 2019 Veterans Day ceremony at the campus flagpoles.

When people think of underrepresented groups in academia, veterans generally aren’t the first to come to mind. UC Irvine’s School of Social Sciences is working to change that.

In the winter and spring 2021 quarters, it will offer the second and third of three courses in its new Veterans Studies Certificate Program, focusing on the experiences of diverse veterans — gay, straight, brown, black, white, male, female and transgender — and their multiple roles in U.S. history and society. Drawing upon critical insights from disciplines such as Chicano/Latino studies and gender & sexuality studies, the curriculum seeks to explore the complexities of veterans as whole people.

Dean Bill Maurer and Anita Casavantes Bradford, associate professor of Chicano/Latino studies and history, conceived of the program — one of only four nationwide and the only one at a top research university — as a way to raise the visibility of the veteran community, help vets feel more included on campus and serve workforce needs. Open to veteran and nonveteran students, the three classes are Soc Sci 132: Veterans in History and Society; Soc Sci 134W: Veterans’ Voices: Culture, Identity and Expression; and Soc Sci 133: Veterans’ Transitions. The certificate is intended for students aspiring to careers in a wide range of fields, including healthcare and law, who expect to work with former military members in the future.

The veterans studies program fills a critical need, given that there are 18 million veterans living in the U.S. today, making up 7 percent of the population, according to the most recent census data. It also fills a gap in career training identified by the U.S. Department of Veterans Affairs, which noted a scarcity of job applicants with broad knowledge of this demographic.

“As we’ve entered our second year, we’ve been delighted to work closely with the UC Irvine Veteran Services Center — and especially its new director, Dr. Dani Molina — to grow the program,” says Casavantes Bradford, who in addition to directing the certificate program also taught in this summer’s Warrior-Scholar outreach “boot camp,” coordinated by UC Irvine’s Student Success Initiatives Center. “This collaboration has helped us expand our network and recruit exciting new veteran-scholars as instructors for the program.”

One of those is Benjamin Schrader. A U.S. Army veteran who served in Germany, Kosovo and Iraq, he will teach Soc Sci 134W in the winter quarter. Schrader earned a Ph.D. in political science at the University of Hawaii and is the author of “Fight to Live, Live to Fight: Veteran Activism After War.” He also sits on the board of directors for Veterans for Peace and About Face: Veterans Against the War.

Schrader is excited to offer the inaugural Veterans’ Voices class to UC Irvine students. “When I left the military, I wanted to better understand my experiences in the military and in war,” he says. “Sadly, I didn’t have many opportunities until I reached graduate school. This course not only allows those who have experienced war to explore topics around their service, but also enables those who have not experienced it to better understand the human impacts of war and military service in a way that’s very rarely examined in undergraduate courses.”