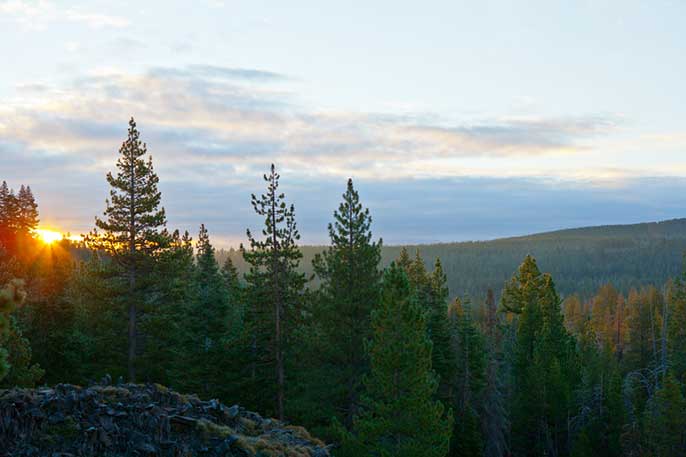 Historical California vegetation data that more than once dodged the dumpster have now proved their true value, documenting that a changing forest structure seen in the Sierra Nevada has actually happened statewide over the past 90 years.

A team of scientists from the University of California, Berkeley, UC Davis and the U.S. Geological Survey compared unique forest surveys collected by UC Berkeley alumnus Albert Wieslander in the 1920s and ‘30s with recent U.S. Forest Service data to show that the decline of large trees and increase in the density of smaller trees is not unique to the state’s mountains.

“Older, larger trees are declining because of disease, drought, logging and other factors, but what stands out is that this decline is statewide,” said study leader Patrick McIntyre, who began the research while a postdoctoral fellow at UC Berkeley and now manages biodiversity data for the California Department of Fish and Wildlife. “Forests are becoming dominated by smaller, more densely packed trees, and oaks are becoming more dominant as pines decline.”

The authors found that the density of large trees declined in all regions of California, with declines up to 50 percent in the Sierra Nevada highlands, the south and central coast ranges and Northern California.

“Based on our data, water stress helps to explain the decline of large trees,” McIntyre said. “Areas experiencing declines in large-tree density also experienced increased water stress since the 1930s.”

The increased density of smaller trees is usually attributed to fire suppression statewide, he noted. Scientists debate the cause of the decline of larger trees, which has been observed in other parts of the world as well, but many suspect that larger trees need more water than smaller trees to withstand droughts and disease.

Co-author David Ackerly, a professor of integrative biology, said that stressed forests and the loss of large trees could exacerbate the global carbon situation, especially since many are hoping that forests will soak up more and more fossil fuel emissions.

“There’s no question that if you are losing large trees, you are losing the standing carbon in the forest,” he said. “Loss of these big trees and the impact of drought stress become a big concern going forward in terms of its impact on the carbon cycle; they can turn a carbon sink into a source of carbon released to the atmosphere.”

The results may help forecast future forest responses to climate change, and in particular suggest that increased temperatures and changing water availability may lead to large-scale changes in forest composition throughout western North America.

The study was published online this week in the early edition of the Proceedings of the National Academy of Sciences.

“Our study shows that areas of greater water stress tend to be dominated more by oaks than by pines, a signal we see despite variation in logging and fire around the state,” McIntyre said.

The study might never have happened if Wieslander’s data, stored both in Sacramento and at Berkeley, had not been saved several times from the trash bin, said co-author Maggi Kelly, a UC Berkeley cooperative extension specialist and professor of environmental science policy and management (ESPM). Wieslander acquired the vegetation data while he worked for the California Forest Experiment Station, a Berkeley outpost of the U.S. Forest Service and the forerunner of UC Berkeley’s Department of Forestry, now part of ESPM.

“This is really an astonishingly broad and detailed depiction of vegetation in California at that time and it’s important that through its nearly 100-year life it has almost been lost a number of times,” she said. “Patrick’s is one of the largest and most comprehensive looks at this historic data set in comparison to comparable contemporary data.”

Most of the plots, maps and photos have been digitized thanks to efforts by Kelly, co-author James Thorne of UC Davis and campus librarians who saw future value in the data. Digitization and the study were funded by the Keck Foundation through the Berkeley Initiative on Global Change Biology (BiGCB), as part of an ongoing effort to create an ecological informatics engine, or EcoEngine, for analyzing historical digitized data relating to ecological change.

“All these records are now brought together in digital form in the EcoEngine, which will allow more people to plumb the data and ask more questions, such as, What about logging? What do the photographic records show?” Kelly said. “We need to remember that there are a lot of valuable collections of data that we can use to make inferences about the future.”

Other co-authors are Christopher Dolanc of UC Davis and Alan and Lorraine Flint of the USGS California Water Science Center in Sacramento.