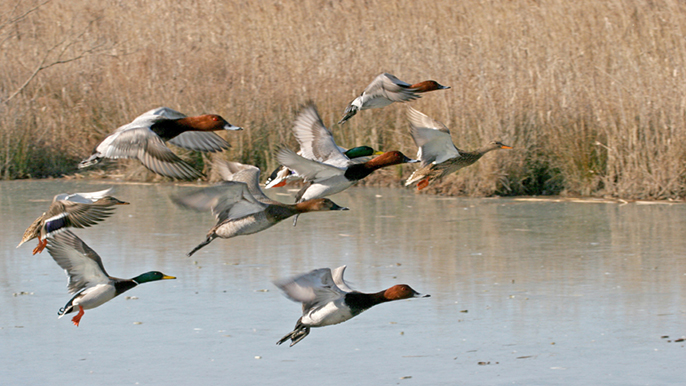 The risk of bird flu transmission is higher in the fall due to the increased number of waterfowl present.

The same weather radar technology used to predict rain is now giving UC researchers the ability to track wild birds that could carry the avian influenza virus. Avian influenza, which kills chickens, turkeys and other birds, can take a significant economic toll on the poultry industry. In 2014-15, the United States experienced its worst bird flu outbreak in history, resulting in more than 48 million birds dying in 15 states, including California.

“We use the existing network of weather radar stations in the U.S. in the same way that radar is used to track rain, except that we process the data to allow us to interpret the radar signal bouncing off birds instead of raindrops,” said Maurice Pitesky, UC Cooperative Extension poultry specialist. “The data can be interpreted to track birds.”

NEXRAD, or next-generation radar, is a network of 160 high-resolution S-band Doppler weather radars operated by the National Weather Service. The technology works best for tracking birds in the winter during feeding. When waterfowl leave their roosting locations in concert to feed, their bodies produce reflectivity of the radar beam.

“By tracking mass bird movements remotely in real time, we hope to gain novel strategic insights with respect to surveillance and prevention of avian influenza transmission to domestic poultry,” said Todd Kelman, a veterinarian and engineer who co-leads the project with Pitesky, who is also in the School of Veterinary Medicine at UC Davis. They are exploring how the information might be used to prevent an outbreak.

In California, waterfowl migrate by the millions from September through March via the Pacific Flyway, where they winter in wetlands, rice and corn fields. The Central Valley alone is home to 3 million waterfowl at the height of migration.

“Using NEXRAD and various other approaches, we hope to be able to produce monthly or quarterly maps that will alert poultry producers as to the locations of waterfowl in the Central Valley of California,” Pitesky said.

“Waterfowl populations can have different habitat based on the amount of precipitation in a given year,” said Pitesky. “Therefore, we need to use these types of monitoring tools to understand where waterfowl are located. Landsat, or satellite-based land imagery, and NEXRAD are two remote tools that may be very useful, as opposed to flyovers and banding, which are more expensive and not practical for large geographical areas.”

The project — funded by UC Agriculture and Natural Resources — is a collaboration between UC Davis School of Veterinary Medicine and Jeff Buler, University of Delaware wildlife ecologist whose team first developed the NEXRAD approach in the Central Valley of California. They also are working with the U.S. Geological Survey, the California Department of Food and Agriculture, the California Poultry Federation, the Pacific Egg and Poultry Association and Point Blue, an organization that focuses on conservation science.