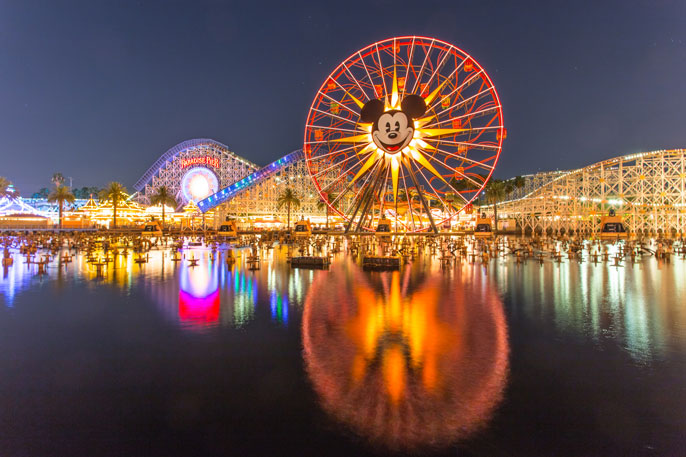 While plotting his new Disneyland class, Roland Betancourt racked up 130 visits to the Magic Kingdom, rode the Matterhorn 600 times, and took more than 20,000 photos and slow-motion videos of the park.

The UC Irvine associate professor of art history and visual studies became so familiar with resort operations that he could place his hand on the concrete exterior of the Matterhorn mountain and sense by vibration when the bobsled coasters encountered various brake zones inside the attraction.

“When I go to Disneyland, I’m not just there for fun,” says Betancourt, who’s also a UC Irvine Chancellor’s fellow. “I notice everything from the brand of churros sold by food carts to the hand signals used by ride operators to communicate with each other.”

“This is not a traditional art history course,” he says. One of the readings, for instance, is a U.S. patent document titled “Amusement Ride for Traveling Down a Water Chute With Reduced Splash.”

Students also pore over Jungle Cruise scripts, social media posts, accident reports, YouTube videos and even an old training manual on how to sell merchandise in Fantasyland. Some of the materials come from 1980s-era Disneyland employee archives in Langson Library’s Special Collections department.

The goal of the class is to “rethink what makes Disneyland a unique cultural space,” says Betancourt, a Byzantium scholar who previously taught a graduate course on “themed, artificial spaces throughout history,” including medieval churches, the Las Vegas Strip and Florida’s Holy Land Experience, a Christian amusement park.

Naturally, his Disneyland syllabus features an optional field trip to the Magic Kingdom. There, he invariably tells students: “Let’s go meet the princesses. I know nobody wants to do this, but it’s a very weird and interesting experience that exposes a different side of the park. Unlike most Disney characters, the princesses don’t wear masks, and they can speak and interact with guests. In particular, Snow White often emulates her movie version’s voice, meaning you have a cast member doing a 1937 classic Hollywood accent and cadence.”

In a similar vein, Betancourt asks class members to stand in certain spots and just listen. “There’s a lot of stimuli, and it’s easy to assume most of it is just noise,” he explains. “But the sounds are actually charged with meaning and not as haphazard as they might seem to untrained ears.” He cites “the clackety-clack of the anti-rollback mechanism of a roller coaster as it climbs a chain-lift hill; the hiss of brakes releasing; and the flutter of pneumatic actuators on the audio-animatronic birds, flowers and gods of the Tiki Room.”

He also keeps an eye out for “Disneybounding,” a fashion fad in which hardcore fans skirt park rules against full costumes by wearing colors and accessories inspired by Disney characters.

The class, which debuted in January, will return next spring, most likely with an exploration of the new Star Wars land, a topic that Betancourt’s first students wanted to talk about endlessly, he says.

“‘Star Wars Galaxy’s Edge’ definitely marks a shift for the park,” he says, noting that, among other things, it will feature trackless rides, an innovation borrowed from Disney’s overseas resorts.

The much-anticipated area’s futuristic, space-age ambience may spur changes in the similarly themed Tomorrowland, he says: “We can expect that Star Tours, Finding Nemo and other Tomorrowland attractions will be reconsidered.”

Until about two years ago, Betancourt, a Miami native, had never set foot in Disneyland (although he was acquainted with Florida’s Disney World). His first visit to the Anaheim park was disorienting, he says, but he now feels conversant enough to launch a side project. “I’m working toward writing a book on the intersection of industrial processes and ride experiences,” Betancourt says.