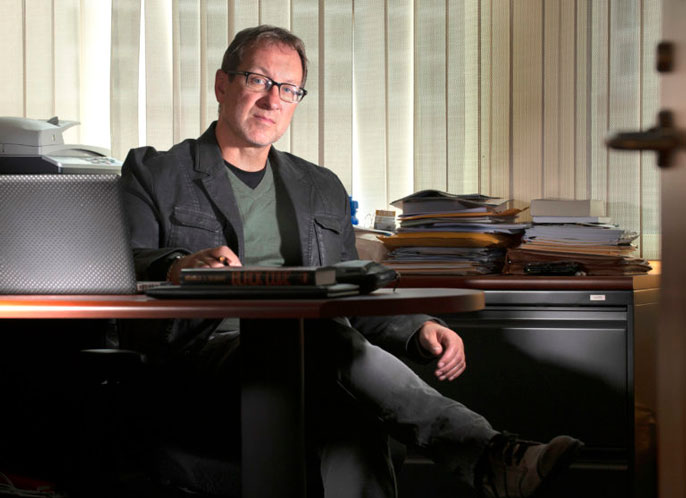 “As far as compassion fatigue, one thing I’ve noticed in people who work in refugee camps and humanitarian settings is that they know what they do is not going to solve the whole problem, but they’re part of a larger effort, and their actions matter,” says Richard Matthew, associate dean of research and international programs in UC Irvine’s School of Social Ecology, professor of urban planning & public policy and director of the campus’s Blum Center for Poverty Alleviation.

COVID-19 has ravaged the U.S., killing more than 120,000 people and causing unemployment levels not seen since the Great Depression. But other parts of the world are also suffering — including developing nations in Africa that haven’t yet been hit badly by the coronavirus but are likely to see major effects soon.

Richard Matthew, associate dean of research and international programs in the School of Social Ecology, has worked in refugee camps around the globe. Here, the professor of urban planning & public policy, who also directs UC Irvine’s Blum Center for Poverty Alleviation, discusses what international agencies believe is in store for poorer countries as the pandemic continues to unfold — and how people in the U.S. can maintain compassion during these trying times.

Q: I want to ask you about compassion, but let’s talk first about the global coronavirus situation to put things in context. Here in the U.S., much of society locked down in mid-March, and now we’re in the process of opening back up, even though people are still dying of COVID-19. Things are different in other parts of the world, particularly Africa, which hasn’t yet been severely affected by the pandemic. What’s the concern there — and especially in refugee camps?

A: It’s not unusual for a highly transmissible disease to hit different places at different times, and that’s what we’re seeing with the coronavirus. In Africa, the United Nations has estimated that there could be as many as 3.3 million deaths, out of a population of 1.2 billion people. Other estimates have put the number lower, but we’re still talking about a lot of people, potentially. It remains a bit of a mystery why COVID-19 has had so little impact in Africa so far. Of course, there’s very little testing capacity, so estimates of current cases could be wrong. The major risk now is that a coronavirus surge would very quickly overwhelm healthcare systems, leaving most people to fend for themselves. There’s a great concern that COVID-19 could take off in the next year among forcibly displaced people in camps and other informal settlements. These areas have been steadily increasing because of pressures like drought and flood for over a decade. Today nearly 80 million people have been forcibly displaced, and many of them lack adequate sanitation and fresh water.

Q: What is the outlook for COVID-19 in the months ahead in developing countries?

A: In worst-case scenarios, the economic impacts could be unprecedented — the U.N. recently predicted that 400 million to 600 million people globally could be pushed into abject poverty by the fallout of COVID-19. That would essentially erase all of the development gains of the last 30 years. A lot of disasters you can get your mind around and envision how they will end and what will need to be done to rebuild. This is different. This is something that could linger for years, especially because these types of viruses will arise in new forms. Peri-urban areas — sprawling regions connecting cities and nature — are the fastest-growing areas on the planet. So we’re likely to see zoonotic diseases move into this world over and over and over.

Q: Let’s talk about compassion. Many people want to help with COVID-19 and the fallout but don’t know how. Is there anything that individuals can do in this type of situation to help people both at home and around the world?

A: We can all do certain things to help front-line workers. For them to function and stay fresh, they need to feel like they’re part of a larger support system, that they’re not entirely on their own, that somebody has their back, that people admire and care about and support them. That applies whether you’re a New York hospital nurse, a humanitarian worker in a refugee camp or a refugee seeking assistance.

Q: The scale of the problem is so big, though. What can people do to sustain the energy to keep offering compassion and not become overwhelmed by the sheer scale of the need?

A: One of the upsides of this crisis is that at the beginning almost everyone experienced the sensation of extreme vulnerability that is the norm for all too many people. For one moment, we all felt threatened and potentially susceptible. So maybe that will generate a deeper sense of empathy and a willingness to take action. As far as compassion fatigue, one thing I’ve noticed in people who work in refugee camps and humanitarian settings is that they know what they do is not going to solve the whole problem, but they’re part of a larger effort, and their actions matter. They also have other passions that help protect them from feeling disheartened, such as art or nature or their families. If you can have perspective on what you can achieve and also find other outlets that connect you to the wonderful side of humankind, then you might protect yourself from feeling overwhelmed.