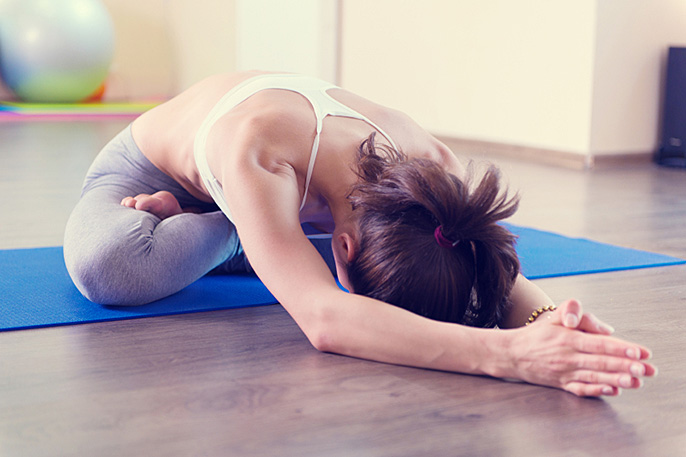 Researchers are examining the physiological effects of yoga postures to see if they provide health benefits beyond what can be achieved with non-movement-based mindfulness practices.

What is it about yoga that makes it such a healthful practice? Is it adding mindfulness to movement that does a body good, or adding movement to mindfulness?

Two studies at the University of California, San Diego Qualcomm Institute are attempting to answer that question by examining the physiological effects of the yoga postures known as asanas to see if they provide health benefits beyond what can be achieved with non-movement-based mindfulness practices or no exercise at all.

The studies are part of a years-long research effort at the Qualcomm Institute (QI) and UC San Diego to quantify the effects of yoga on the human body using wireless biometric devices and clinical measurements — perhaps a fitting research pursuit for a region of California known for its high concentration of yoga devotees.

Leading one of the studies is Linda Hill, a professor in the Department of Family Medicine and Public Health. Hill and her team will try to quantify the effect of yoga asanas on the parasympathetic nervous system (PNS) for subjects who have previously not been engaged in much physical activity (so-called "couch potatoes"). When at optimal levels — as measured by heart rate variation and other metrics — the PNS is associated with a state of relaxation and good health, hence its nickname as the ‘rest and digest’ function of the body.

A second study, led by UC San Diego cognitive neuroscientist Laura Schmalzl of the Department of Family Medicine and Public Health, is examining how an asana-based yoga practice, as compared to a practice consisting of seated breathing exercises, might influence physiological and cognitive parameters including heart rate, stress hormones and the ability to sustain attention over time.

QI Director Ramesh Rao, who also practices meditation and yoga, considers the Institute an ideal laboratory for this type of mind-body study. Rao is himself involved in a loosely organized group of researchers at QI called “The Science of Yoga” that includes primate researcher and associate project scientist Deborah Forster (a practitioner of the Feldenkrais Method for reducing pain or limitations on movement) and David Shanahoff-Khalsa, a researcher in mind-body dynamics who uses techniques derived from Kundalini yoga meditation to treat psychiatric disorders. The group also experimented with the “Bliss Buzzer,” a digital health app Rao created with a team of students to alert users when they have achieved a particularly healthful heart rate variation, or moment of “bliss.”

“Instead of leaving yoga in the domain of spirituality or alternative health, we’re beginning to see there is a deeper way to understand how the science works,” says Rao. “The Qualcomm Institute has supported and continues to support these types of studies in different ways, whether it’s through our facilities, grants, widgets or gadgets. We are enabling, in some ways, a variety of new research projects, and the more people can take advantage of these resources, the larger our network can become.”

At the heart of both new studies is a basic question: Do yoga-based practices provide particular health benefits that cannot be derived from other forms of exercise or mindfulness practices alone?

For their three-month study, Hill and her team recruited 20 "couch potatoes" who were between the ages of 20 and 45 years old, were drug-free non-smokers, had no exercise regimen and had never done yoga. (“It’s challenging to find people in Southern California who are in that age group but are lethargic enough to fit the study criteria,” notes Hill.)

Although the study does include a small control group of people whose exercise regimen consists solely of walking and another control group of people who have been engaged in yoga for more than a year, each of the experimental subjects also serves as his or her own control. The study begins with a collection of baseline data pertaining to the subjects' heart rate variation, blood pressure, fitness levels (using a FitBit device during a three-minute step test) and even self-reported well-being and levels of depression. The subjects will then be measured for the same variables at the end of the study to see if the asana practice has led to any marked improvements.

In previous studies, Hill’s husband and research partner Andrew Baird — as well as Brian Eliceiri, both in the Department of Surgery — have discovered that stimulation of the PNS in rodent models showed improved homeostasis (stability of internal conditions), and other studies on humans have shown improvement in heart rate variation, reduced blood pressure and reduced heart rate.

“This suggests there are changes to the PNS that may explain some of the health outcomes we see,” explains Hill. “Of course there’s a large body of work on the benefits of exercise, and research over the years has also shown the beneficial effects of yoga. Some of literature derived from animal studies, but also in some human studies, have suggested that yoga stimulates the PNS.”

Baird’s lab will assist with assessment of the data at the molecular level to determine if the yoga practice leads to changes in cellular blood variables including stem cells, proteins and RNA, as well as decreased levels of C-reactive protein, which increases in response to inflammation.

Adds Hill: “We want to see if we can explain the model, to know if PNS tone mediates changes in people’s inflammation markers, and is that reflected in heart-rate variation. At the pilot level we hope to get some insight into this.”

Schmalzl’s two-year study, which is funded by the Mind & Life Institute, will examine the effect of yoga-based practices on "bottom-up" physiological processes (e.g. heart rate and stress hormones), "top-down" cognitive processes (e.g. the ability to sustain attention over time), and on how these two types of processes may interact.

Says Schmalzl: “Compared to studies on mindfulness-based practices, far fewer studies have investigated the effect of movement-based contemplative practices such as yoga. We’re curious to see what the movement component adds to the effect of these practices, as opposed to a practice that consists solely of breathing and concentration.”

A total of 65 participants between the ages of 18 and 35 who never practiced yoga before are enrolled in Schmalzl’s study. Prior to the intervention, all participants underwent an assessment that included measurement of heart rate variability and cortisol levels, as well an hour-long computerized attention task, “admittedly a very boring and in fact quite tortuous task,” says Schmalzl.

Participants are then randomly assigned to either a “movement-focused” yoga group or a “breath-focused” yoga group. The movement-based practice consists of a series of postures and movement sequences, coupled with rhythmic breathing and focused gaze to aid concentration. The breath-based practice consists of seated breathing exercises and focused gaze, but there is no active physical movement. Participants of both groups attend two classes per week for eight weeks, and additionally perform home practice sessions guided by videos.

The classes are held in the Qualcomm Institute’s open-space yoga room, on the fifth floor of Atkinson Hall (the location of several of UC San Diego’s yoga-based studies). At the end of the intervention participants undergo the same assessment that they did at the beginning. Cortisol samples will be analyzed in the lab of UC San Diego psychiatry professor Paul Mills.

Adds Schmalzl: “Yoga practice is a lot about learning to focus one’s attention and getting less distracted by external stimuli. What’s not yet well understood are the mechanisms through which yoga-based practices enhance attentional skills, and we hope our study will make a contribution in this regard. I believe that yoga-based practices have a great potential for promoting self-regulatory processes in both healthy and clinical populations.”