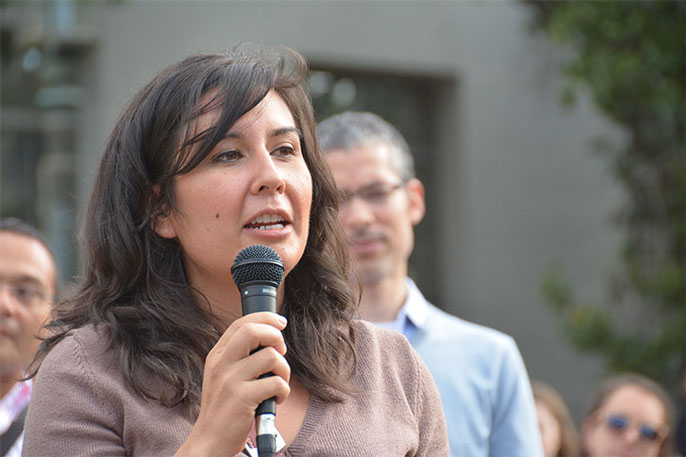 September 15 through October 15 marks Hispanic Heritage Month, a time to celebrate the varied contributions and cultural backgrounds of over 58.9 million people in the United States of Hispanic origin. Or is it Latino origin? Or Latinx?

In fact, there is no one label, much less a “right” one. It may surprise you to learn that these labels, as we know them today, are a relatively new invention, popularized as part of an effort to reflect a changing population on the U.S. Census.

In her book “Making Hispanics: How Activists, Bureaucrats, and Media Constructed a New American,” UC Berkeley sociology professor G. Cristina Mora explores how these designations came about and were eventually embraced by communities from a wide array of cultural and geographic backgrounds.

We asked her to walk us through the evolution of these identities and how they have influenced politics and culture.

How did you get into studying this topic?

I'm originally from Los Angeles. When I was growing up in the ‘80s and early ‘90s, being Latino in L.A. really meant that you were Mexican. I used to say diversity in my high school was about what part of Mexico your parents came from!

When I moved to the East Coast to do my graduate work, Spanish was spoken differently — different accents, connotations, different meanings sometimes. And not just the words, the music, sights and politics were different, too.

It was interesting to me, because how can [you] just corral everybody in one sort of label, given we’re so different? I started exploring the question of, “How did this happen?”

How did the concept of a single identity emerge?

In the early ‘60s if you would have gone to Spanish Harlem and said, “Are you Hispanic?” a good amount of people would not have known what you were talking about. They would say, “No, I’m Puerto Rican.” If you were of Mexican descent in Texas, you might think of yourself as Mexican. Your birth certificate would say “white.”

During the ‘60s, the gains of the African American civil rights movement inspired several groups to organize. Mexican Americans in the Southwest tried to draw attention to the fact that children in their communities were segregated in lower performing schools, that there were high rates of poverty, joblessness and discrimination in labor markets. At the same time, Puerto Ricans were doing almost the exact same thing, just on the other side of the country.

One of the biggest challenges these two groups kept facing was it was very easy for the federal government to say their issues were not national in scope. The government saw them as regional issues. Latino leaders soon realized that if they could join their struggles and come up with a broader umbrella label, they could now argue this was a national issue.

Organizers began saying, this is a community that stretches from coast to coast, that needs Spanish-language job training as much in Los Angeles as in Philadelphia or New York. That’s how these ideas started getting traction.

So it didn’t come from the outside?

I think because of the history in the United States of imposing racial categories with really stark boundaries — think Native American, black, white — we tend to think it was just the state that created these categories. But emphasizing the state neglects that this was also a real fight for recognition — that Mexican and Puerto Rican leaders had to organize and really make the government pay attention to them.

How did this new category spread?

Over time Latino leaders developed their own cultural platforms. Mexicans in Los Angeles had their own TV stations, and Puerto Ricans had their own. Throughout the 1970s they found they could share content across the country, and it would get similar ratings in Los Angeles and New York. A media empire started to coalesce around the Spanish language and the idea of a common identity.

Activist groups would go on news broadcasts, saying they were Hispanic and promoting a common identity.

So the political message very quickly mapped on to a media infrastructure.

The efforts of activists and media started conversations that by 1980 led to a Hispanic category on the U.S. Census.

Once it gets on the census in 1980, it can get on driver's licenses, birth certificates, school forms, all kinds of records. Then it starts to become much more known.

The first survey on whether people consider themselves Hispanic was run by Rudy de la Garza in 1989-90. Back then, about 20 percent of people that we consider Hispanic today called themselves Hispanic. By 2012, with different configurations of the question, you get that number to about 85 to 90 percent.

How did Latino develop — and how is it different from Hispanic?

Hispanic is often thought of as a vision of the community that sees connectivity through Spain and through the contributions of Spanish culture and Spanish society on the Americas.

Latino is less Spanish-centric. Some argue that the term more accurately conveys unity through a shared history of European colonization and a common struggle for national independence.

Resistance to the idea of Hispanic emerged at a time when academics started applying a much more critical lens to colonial history. There was pushback and a sense that words matter — that by elevating “Hispanic” one is obscuring a history of colonialism, slavery, genocide, the Spanish legacy across the Americas. So “Latino” developed as an alternative, albeit an imperfect one.

So which term is correct?

That’s difficult to answer, in large part because the question assumes that there is one, true label. Or that these can be judged as correct or incorrect.

What we do know is that Hispanic and Latino labels are embraced almost equally. One of the reasons these labels last is because they're really vague and could mean different things to different people. For the most part, people can say “I'm Hispanic” and not necessarily think about the Spanish colonial legacy.

In urban areas, Latino is more common. In rural areas, if you’re from the valley in Texas, for example, or the Central Valley in California, Hispanic is much more common. It sort of maps onto regional differences. Yet most people take them both for granted.

What countries of origin would you include in Hispanic? How about Latino?

One of the genius parts of creating these categories is that the less you define something, the larger it can be. So the issue of Brazil has always been unclear. Are they Latinos but not Hispanic? Can we be Hispanics but not Latinos?

When we don’t have a definitive list of who belongs in the category, if we maintain a little ambiguity, the classification and label can be as expansive as we claim them to be.

I think that's the way large categories work. When we don't define them completely we don't run the risk of ostracizing people. Hispanic/Latino also works if folks can see the terms as complementary to, and not mutually exclusive with, national identities. No one ever said — you have to choose to be either Hispanic or Puerto Rican, or Hispanic or Mexican. Think about it: There is no Hispanic or Latino Flag. Panethnicity has always meant to be seen as an addition to one’s national identity, suggesting that there can be multiple forms of identity.

How do you identify?

I go back and forth between Chicana and Latina.

How do you think this new identity worked in term of pride building, community building, a sense of contributing to American heritage?

A great example is all the fanfare around the appointment of Sonia Sotomayor as the first Latina Supreme Court justice. Latino organizations celebrated this event as the coming of age of this national community, as representation on the highest judicial stage. When she took the role, she said, “I’m Puerto Rican” and she very publically acknowledged her Latino heritage. She spoke often of the value of having a wise Latina on this stage, the value of Latino panethnic representation.

What these moments do is validate the idea that panethnicity is not just a political construction. It affirms that Latinos are a community that has a history, and that this history is part of the nation’s story.

Let’s talk about the newest evolution: What are your thoughts on Latinx?

It’s a little premature to tell. What we do know is that the labels Hispanic and Latino are resilient because they have been able to coincide with each other without one taking over the other. This is not to say that there are not important debates and conversations about the meaning of these labels. Its simply that the labels are both still very present and used interchangeably by most.

The Latinx term has emerged in the context in which institutions, academia and media are starting to think about nonbinary forms of gender identification. It’s not a coincidence that Latinx emerges among student activists, DREAMER activists and LGBTQ allies at universities. You see it catch wind first in academia.

The question is whether it will go beyond that boundary, and that is unclear for now. There is an important vision behind Latinx — one that sees transformative understandings of how we identify. At the same time, history shows that some labels only stay within confined spaces.

People use Latinx in academia, but not necessarily when they're addressing community organizations or when they speak and write in Spanish. So at this point, only time will tell.

Thanks to G. Cristina Mora for participating in our interview! For more information about her work, please visit her website.