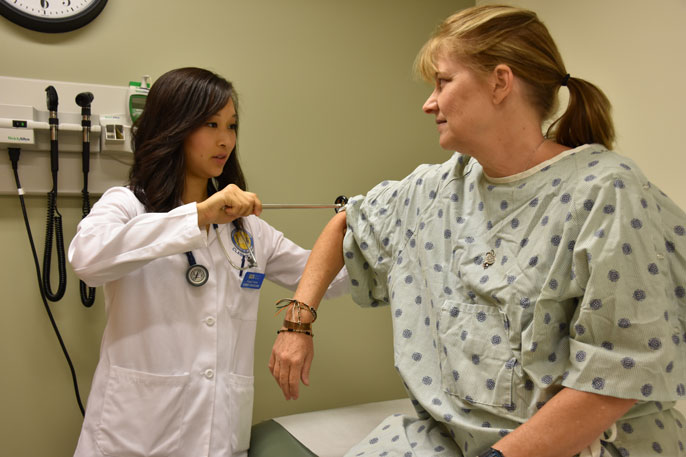 The NEH is the only federal agency dedicated to promoting and enhancing research, education and public programs in the humanities, work that advances knowledge of our own history and civilization, and fosters better international cooperation and understanding.

One of the newest medical schools in the country now includes the humanities in its required curriculum, a move that is helping its physicians communicate more effectively with patients from diverse communities.

UC Riverside’s School of Medicine, which opened in 2013, requires that its students taking writing classes and attend lectures in the medical humanities – learning, for example, how asking the right kinds of questions can shed light on the barriers to care that a patient may be facing.

“The medical humanities are playing an important role in training the next generation of physicians,” said Milagros Peña, the dean for UC Riverside’s College of Arts, Humanities and Social Sciences. “Physicians are learning about patient care through a humanistic lens.”

The humanities curriculum at the Riverside School of Medicine grew from a $100,000 grant from the National Endowment for the Humanities to develop a health humanities program at UC Riverside that focused on the role of storytelling in medicine and healing.

Peña, a panelist at a recent UC congressional briefing on the value of NEH funding, said that the interdisciplinary grant allowed UC Riverside’s humanities scholars to collaborate with School of Medicine faculty on ways to integrate narrative into medical students’ training.

Bridging gaps between humanities and STEM for better care

From there the collaboration has grown and continues to evolve, she said. The medical school curriculum now includes required writing classes for first- and second-year students, and mandatory seminars for all students on topics such as Narrative and Inequality, taught by medical anthropologist Juliet McMullin, one of the principal investigators on the NEH grant.

“They’re learning that being a doctor is more than just knowing biology and disease. It’s the overall well-being of a patient,” McMullin said. “The kinds of questions you ask when you see a patient – it’s not just how they feel physically. It’s what’s going on in their daily lives with work, family, housing or even something as basic as transportation – one of the things that we know can be an obstacle to care.”

The UC Riverside School of Medicine defines itself, in part, through a strong emphasis on community health and in working closely with the diverse and medically underserved populations of inland southern California, McMullin said.

By the second week of medical school, students are spending time working in a clinical setting, making it all the more important that they know how to communicate effectively with patients and build their trust.

“It’s so exciting to see that we can train physicians to see patients as real human beings with complex lives,” McMullin said.

Encouraging innovation for the next generation

“There is a growing recognition that separating the humanities from STEM education was a mistake,” Peña said. “In surveys, business leaders say they want graduates with a liberal arts education because they think outside the box. They think creatively and they write and communicate well.”

And, as the UC Riverside example demonstrates, even a relatively small grant can produce a big result.

“With the type of funding that the NEH provides, we were able to create synergies across disciplines, and the impact of that work is incredibly profound,” Peña said. “The dollars they have invested will make a tremendous difference for the next generation of physicians.”