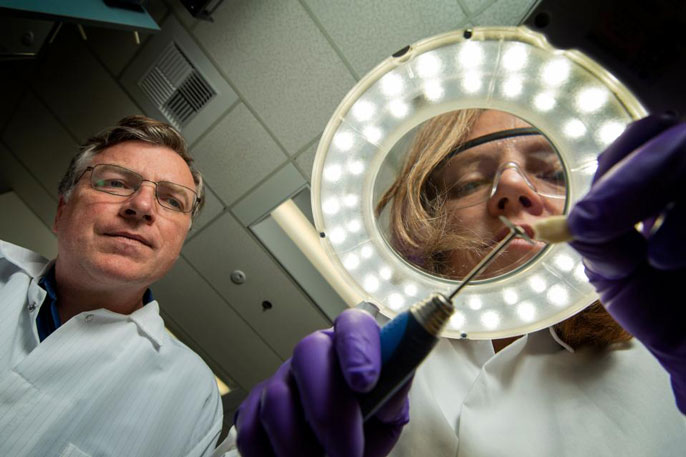 Postdoctoral researcher Tamy Buonasera, right, and Glendon Parker, adjunct associate professor in Environmental Toxicology and forensic science at UC Davis examine a tooth sample. Parker’s laboratory can identify individuals based on tiny amounts of protein from hair, teeth and fingermarks. The techniques could be used in anthropology and forensic science.

DNA evidence has revolutionized forensic science in the past few years, cracking open cold cases and bringing both convictions and exonerations. The same techniques help archaeologists and anthropologists studying remains from ancient peoples or human ancestors.

But DNA is a relatively fragile molecule that breaks down easily. That’s where proteomics, the new science of analyzing proteins, comes in. By reading the sequence of amino acids from fragments of protein, scientists can work backwards to infer the sequence of DNA that produced the protein.

“It’s reading DNA when you don’t have any DNA to read,” said Glendon Parker, adjunct associate professor in the Department of Environmental Toxicology and graduate group in forensic science at the University of California, Davis. “Protein is much more stable than DNA, and protein detection technology is much better now.”

Parker’s laboratory at UC Davis, with colleagues including Jelmer Eerkens, professor of anthropology, Robert Rice, professor of environmental toxicology and Brett Phinney, manager of the Proteomics Core Facility at the UC Davis Genome Center, is working to establish proteomics as a new tool in forensics and anthropology.

Proteomics technology could be used where samples are old or degraded, and to back up results from DNA analysis, Parker said. Like genomics — the study of entire genomes and large amounts of DNA — it’s a new field enabled by rapid advances in protein sequencing technology and computing.

The instruments like those at the UC Davis Proteomics Core Facility can work with vanishingly small amounts of protein, as little as 50 nanograms. An inch of human hair contains 100 micrograms of protein.

Hair is often found at crime scenes. Hair has very little DNA, but more than enough protein (mostly keratin) for analysis. By looking at variant amino acids in keratin, researchers can identify single-nucleotide polymorphisms, or SNPs, in the underlying DNA. That information can be used for both personal identification and to get information on ancestry.

Hairs vary somewhat depending on where on the body they come from, but a recent paper led by graduate student Zachary Goecker from Parker’s team showed that the differences between scalp, beard, armpit and pubic hair are not great enough to affect identification. Changes such as graying, dyeing and peroxide treatments had no effect on the identifying information from peptides, Parker said. The study was published in March 2019 in Forensic Science International: Genetics.

For anthropologists, bones and teeth are a window to people of the past, but DNA may be in a very poor state. Working with Eerkens, Julia Yip, a graduate student in Parker’s laboratory, developed a method to determine the biological sex of an individual based on a single tooth.

That’s possible because teeth contain a protein called amelogenin, which happens to be located on the X and Y chromosomes that determine biological sex. If a tooth has amelogenin-Y, then it must have come from an individual with XY chromosomes and therefore most likely a biological male.

In side-by-side tests, the tooth protein analysis was more sensitive and reliable for sex determination than either DNA or looking at the anatomy of skeletons. The work was published last year in the Journal of Archaeological Science and is being followed up by postdoctoral researcher Tammy Buonasera.

In a paper published in May 2019 in Forensic Science International: Genetics, the team has also shown that it is possible to get enough protein for personal identification from a fingermark. The issue is in finding and collecting the sample rather than the sensitivity of the machine, Parker said.

Parker hopes that forensic proteomics can move out of the laboratory and into some real-world cases. The technique needs to be thoroughly validated before going into wide use, Parker said, but he expects those “boxes to be checked” within about a year. One possible starting point would be working on “cold case” sexual assault kits that are also being tested for DNA and other evidence.

“We’re trying to get the interest of the forensics community in getting us involved in some of these cases,” Parker said.