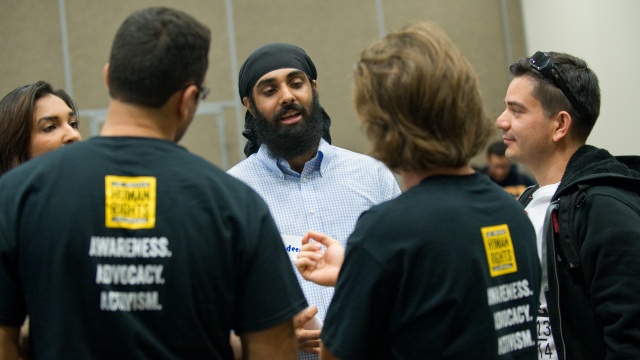 UC Irvine undergraduates Rajpreet Brar and Jasdeep Soni explain the practices of their Sikh faith to fellow students at a speed-faithing session at the Student Center. The event allowed participants to learn about different religions in 10-minute bursts.

On a Wednesday in November at precisely 1:15 p.m., a line of men bowed from the waist in unison, knelt and prostrated themselves. Behind them two women in Muslim head garb did the same. Their motions were fluid, solemn and perfectly synchronized. The congregation of the Islamic Center of Irvine was practicing midday prayer.

At the back of the mosque, staff and faculty members from UC Irvine watched.

“It’s awesome,” whispered Susan Whitley-Clark, an administrative associate of radiological sciences,  as she crept out in her socks, grabbed her shoes and boarded a van for the next stop: the Christ Our Redeemer African Methodist Episcopal Church at the other end of Irvine. There co-pastor Hermia Shegog Whitlock talked about how she exhorts her congregation to join in dance liturgy. “Our bodies ARE our temples, we need to get up and move,” she said.

UC Irvine has been a mecca of interfaith activities this fall. More than 100 students dove into fast-paced “speed faithing” in late October, moving from room to room sampling the world’s great spiritual traditions in 15-minute bites. Faculty and staff visited four houses of worship – along with the mosque and church they saw the Congregation Shir Ha-Ma’a lot Jewish synagogue, where the rabbi showed them a Torah scroll that survived the Holocaust and the Pao Fa Buddhist Temple, where they joined in silent, contemplative lunch with master nuns.

“We sometimes say that Saturday and Sunday are the most segregated days of the week, when we’re engaged in our different forms of worship. We’re here to break down some of those walls of weekend segregation and to share and learn about each other’s beliefs, values and faith traditions,” said Thomas Parham, vice chancellor for student affairs.

“We have such a wonderfully diverse fabric, both at UC Irvine and in the community, in fact all of Orange County,” agreed Raid Faraj, diversity educator with the campus Office of Equal Opportunity & Diversity, who arranged the visits.

Doctrine, dress, diet and the eternal dialogue between science and religion were all fair game, as long as questions were asked with respect. Surprisingly, universal practices and truths often emerged.

At the speed faithing event in the Student Center, students Yarden Eisenberg and Shirelle Chalamish explained that Hasidic Jews grow facial hair in accordance with Hebrew dicta that men should not allow a knife to touch different facial points. “Since they aren’t trying to hide it, they curl the hair to make it more beautiful for God,” said Eisenberg, a computer science major.

Fatima Mubbashir, a devout Muslim student who is a behavioral psychology major, nodded in agreement: “It makes total sense to me, they are trying to preserve their bodies – to respect them for God – just as we do.”

She was grateful for the answer to a question that has bugged her since she was a girl in New York City. “I always saw these men with long curls hanging down the sides of their faces.  I didn’t have any Jewish friends, so I couldn’t ask why.”

One room away Sikh students explained meditation chanting, a few feet from two Mormon students describing the dream of God and Jesus that founder Joseph Smith had in 1820. Angels, reincarnation, mindfulness and waiting for the Messiah were all raised in different sessions.

Some discussions were esoteric but intense. “Have you read (atheist author) Richard Dawkins, or how about the bad boy of atheism, Frederic Nietzsche?” demanded one student.

“I have read Dawkins,” said Pavan Somisetty, a student atheist who is a computer games major.

“Yes, but do you think the universe is only composed of electrons?” the questioner fired back. Somisetty gently nodded, but added that he still believes in “doing good” even if he doesn’t practice organized religion.

The 18 participants in the Houses of Worship event had two full days to ask questions.

Rick Snyder, a senior psychiatric technician at the adolescent psychiatric unit of UC Irvine Medical Center, said he attended because, “It’s a great way to be better informed. I teach kids about understanding our differences and building relationships.”

Amanda Garcia-Hall, executive assistant to the engineering dean, said it was enlightening. “It was really generous of every house of worship we visited to allow us in their space and to be so open and honest with us.”

She was especially grateful to visit the ornate Pao Fa temple, where two nuns in simple gray garb patiently gave a thorough overview of the religion. Her father practiced Buddhism, but this was her first chance to visit a temple and ask detailed questions.

Faith leaders and student instructors said they welcomed the opportunity. Largely located in commercial areas, the places of worship have vibrant and fast-growing memberships. Inside the temple dining room, the fruity ripe aroma of persimmons permeated the air — the nuns, like Buddha centuries ago, depend on food donations from the community.

“Our Abbott said we live under a roof built by people for us and eat their food, so we have to try to help them,” said one.

“I loved them all, but my favorite was probably the mosque,” said Whitley-Clark. “It was so beautiful to see that prayer service. I had a lot of ideas about that religion that were wrong. I learned a lot more and I will forever look at it differently.”

She added, “I’m just so grateful I had this whole experience. It made me appreciate the fact that I’m from California, because we are so diverse and so willing to appreciate each other’s differences.”