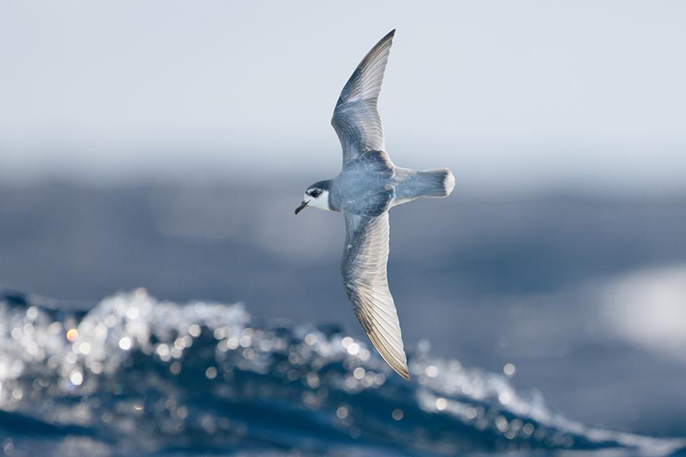 Some species of seabirds, including blue petrels, are particularly vulnerable to eating plastic debris at sea.

Not in the case of ocean-faring birds that are sometimes found with bellies full of plastic. But very little research examines why birds make the mistake of eating plastic in the first place.

It turns out that marine plastic debris emits the scent of a sulfurous compound that some seabirds have relied upon for thousands of years to tell them where to find food, according to a study from the University of California, Davis. This olfactory cue essentially tricks the birds into confusing marine plastic with food.

The study, published today (Nov. 9) in the journal Science Advances, helps explain why plastic ingestion is more prevalent in some seabird species than in others. Tubenosed seabirds, such as petrels and albatross, have a keen sense of smell, which they use to hunt. They also are among the birds most severely affected by plastic consumption.

The birds’ point of view

“It’s important to consider the organism’s point of view in questions like this,” said lead author Matthew Savoca, who performed the study as a graduate student in the lab of UC Davis professor Gabrielle Nevitt and who is with the Graduate Group in Ecology. “Animals usually have a reason for the decisions they make. If we want to truly understand why animals are eating plastic in the ocean, we have to think about how animals find food.”

The study could also open the door to new strategies that address the ocean’s plastic problem, which plagues not only seabirds, but also fish, sea turtles and other marine life.

The flavor profile of trash

To learn exactly what marine plastic debris smells like, the scientists put beads made of the three most common types of plastic debris — high-density polyethylene, low-density polyethylene, and poly-propylene — into the ocean at Monterey Bay and Bodega Bay, off the California coast. Taking care not to add to the marine plastic problem, the scientists placed the beads inside specially sewn mesh bags and tied them to an ocean buoy before collecting them about three weeks later.

They brought the retrieved plastic to a somewhat unusual resource for marine ecologists — the UC Davis Department of Viticulture and Enology, where researchers are more often found analyzing wine flavor chemistry than smelly trash.

Co-author Nevitt, with the UC Davis Department of Neurobiology, Physiology and Behavior, had previously established that DMS is a scent that triggers tubenosed seabirds to forage. DMS is released when algae is eaten by animals like krill, one of the birds’ favorite meals. So while the algae does not smell like food itself, it does smell like food being eaten, which is the birds’ version of a dinner bell.

The study noted that seabirds that track the scent of DMS to find prey are nearly six times more likely to eat plastic than those that do not.

“This study shows that species that don’t receive lot of attention, like petrels and some species of shearwaters, are likely to be impacted by plastic ingestion,” Nevitt said. “These species nest in underground burrows, which are hard to study, so they are often overlooked. Yet, based on their foraging strategy, this study shows they’re actually consuming a lot of plastic and are particularly vulnerable to marine debris.”

The study was funded by a National Science Foundation Graduate Research Fellowship and the NSF Office of Polar Programs.