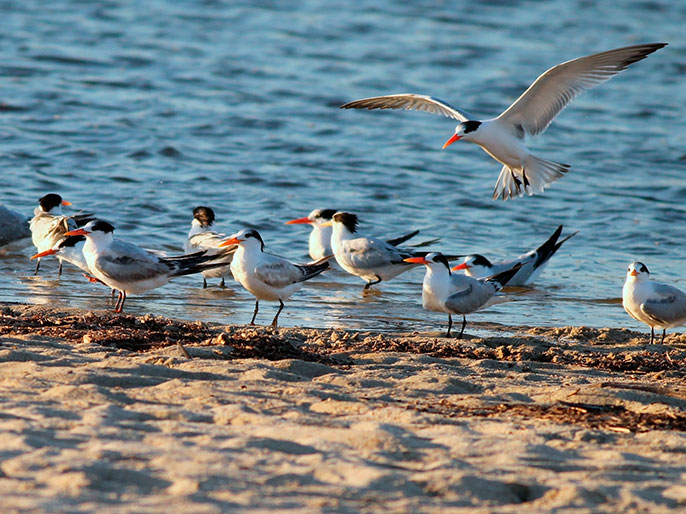 Elegant terns and other seabirds that once flocked to Isla Rasa in the Gulf of California now increasingly go north to nest.

Isla Rasa, in the Gulf of California, is renowned for its massive aggregations of nesting seabirds. Over 95 percent of the world populations of elegant terns and Heermann’s gulls concentrate unfailingly every year on this tiny island to nest. Ever since the phenomenon was described by L.W. Walker in 1953 the island has been a magnet for tourists, naturalists, filmmakers and seabird researchers.

During some years in the last two decades, however, the seabirds have arrived to the island in April, as they usually do, but leave soon after without nesting. The first event was the 1998 “El Niño,” when oceanic productivity collapsed all along the eastern Pacific coast from Chile to California. But then colony desertion happened again in 2003, and since then it has recurred with increasing frequency in 2009, 2010, 2014, and 2015. Researchers and conservationists were asking themselves: Where are the birds going when they leave their ancestral nesting ground, and what is causing the abandonment of their historic nesting site?

Using nest counts in seabird colonies from Mexico and California, they found that elegant terns have expanded from the Gulf of California, in Mexico, into Southern California during the last two decades, but that the expansion fluctuates from year to year. “Whenever the terns perceive the conditions in the gulf as inadequate to ensure successful reproduction,” says Enriqueta Velarde, project leader, “they move to alternative nesting grounds in Southern California including the San Diego Saltworks, Bolsa Chica Ecological Reserve and Los Angeles Harbor.”

The decision to remain in the gulf or move to Southern California is related to the fact that during the last 15 years, the Gulf of California has been getting abnormally warm during some seasons, and those peaks in sea surface temperatures have not been equally high along the California Current and Southern California Bight on the Pacific coast. “When the gulf waters get unusually warm,” explains Exequiel Ezcurra, a longtime collaborator of Velarde and a professor of ecology at the University of California, Riverside, “the sea becomes capped by a layer of warm surface water and the upwelling of cold, nutrient-rich waters fails to reach the surface. Productivity declines and, with it, the availability of small pelagic fish, on which the seabirds feed, also falls.”

The collapse in food for the seabirds that results from warming waters, the study shows, is compounded by the reduction in sardine populations brought by intensive fishing in Mexico. Confronted with lack of food, the seabirds take off toward the coasts of Southern California.

Increased frequencies of abnormally warm waters in the Gulf of California, possibly as a result of globally warming oceans, coupled with extremely high fishing pressure, are delivering a combined blow to the legendary productivity of the Gulf of California, forcing seabirds to fly away in search for more suitable environments, even if that means abandoning their ancestral nesting grounds and moving into highly transformed industrial landscapes such as the San Diego Saltworks or the L.A. Harbor Container Terminal.