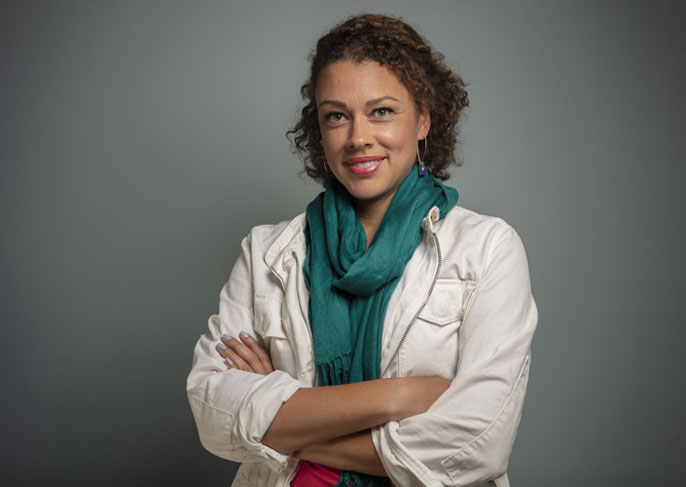 The anxiety of being black, female and at the mercy of the U.S. healthcare system first hit Tina Sacks when her mother was diagnosed with breast cancer. Bette Parks Sacks, then in her 50s, intuitively knew something was wrong but, like many African American women, was afraid her doctor would give her the brush-off.

It wasn’t until a conscientious mammography technician advised Parks Sacks to follow up with her physician that her breast cancer was caught — in time. Less fortunate are untold numbers of African American women who did not aggressively advocate for their health for fear of being discounted.

In her new book “Invisible Visits: Black Middle-Class Women in the American Healthcare System” (Oxford University Press, 2019), Sacks, an assistant professor of social welfare at UC Berkeley, tells the often frightening human stories behind the statistics about delayed or denied diagnoses and/or treatment and high mortality rates among African Americans.

Invisible Visits is largely based on in-depth interviews Sacks conducted for her study “Performing Black womanhood: A qualitative study of stereotypes and the healthcare encounter,” which was published in 2017 in the journal Critical Public Health.

“When you look at inequalities in healthcare, you see a lot of studies tying the problems to race and poverty, but there’s not a lot about educated, insured black women who are not poor,” Sacks says. “Yet infant mortality rates for black women with a college degree are higher than those for white women with just a high school education. I wanted to dig deeper into the personal experiences behind this disparity.”

This spring, Sacks, a former NCAA Division 1 tennis player who is married to documentary filmmaker and photographer Carlos Javier Ortiz, will give talks on and off campus about the ongoing racial disparities brought to light in Invisible Visits. Berkeley News recently sat down with Sacks to ask about the inspiration for her book, the inequities it highlights and how to address them.

Q: What overarching issue motivated you to write the book?

A: There’s so much large-scale data showing racial disparities in healthcare, but I was more interested in telling these women’s personal stories to understand their challenges in healthcare settings and how they manage them. One of the running themes in the book is that black women cannot prove they are being discounted or denied treatment, but have this persistent nagging feeling that something is amiss and they’re not being treated the way they should. The book looks at why this is happening and what we can do to change it.

A: Being a racial minority is usually equated with being poor, and so it’s assumed that black middle-class women should be fine because they’re not poor. But they’re not fine. They face substantial health challenges and differences in health outcomes. My work points to the persistence of racial discrimination across class, resulting in lower life expectancy and higher rates of infant mortality, and also highlights the unique challenges women in general and black women in particular face trying to be taken seriously and get their needs met by their doctors.

Q: Before coming to UC Berkeley, you worked for the federal Centers for Disease Control and Prevention in Atlanta. How did your experiences there shape the book?

A: Working alongside other professional black women who were stressed out by the health system became part of the impetus that led to the book. My colleagues and I would prominently wear our CDC employee badges when we visited the doctor’s office to signal that we were educated and had health insurance. We felt we had to guard against what might be discrimination based on being both female and black.

Q: What are some of the stereotypes about black women that lead to critical outcomes?

A: One is the tendency to blame black women’s health problems on weight. A case that stands out to me was a woman who was 35 at the time I met her, who had suffered from severe knee pain since she was 19 or 20. As the pain worsened, she kept going to the doctor, who told her she just needed to lose weight. She would get X-rays, but not more sophisticated diagnostic workups. Finally, she found a doctor who ordered an MRI. Once the results were in, she was called immediately to the hospital and told she had two tumors in her knee. They had been there all this time. They were able to remove the tumors and save her leg, but if they had waited any longer, they would have had to amputate her leg.

Q: How about racial biases in pain management?

A: This is a real problem. You even see it in pediatrics. A whole section of my book addresses how physicians and other medical staff are trained to treat pain based on racial profiling. One medical textbook, “Nursing: A Concept-Based Approach to Learning,” first published in 2010, talks about how different racial and ethnic groups react differently to acute and chronic pain and uses racist, anti-Semitic and Islamophobic stereotypes. Anecdotally, one of the members of my Ph.D. dissertation committee was a black female physician. She delivered her twins at the same hospital where she was an internist, but she wasn’t allowed pain medication during labor until she told them she was an attending physician at the hospital. Only then would they give her an epidural.

Q: You’ve blogged about tennis icon Serena Williams, who had a life-threatening health scare after giving birth in 2017. As a celebrity, does her experience also fit with the thesis of your book?

A: Absolutely. Black women’s perceptions of what’s going on with their own bodies are often discounted, even if they’re Serena Williams. According to an interview she did with Vogue, Williams was at risk for a pulmonary embolism and was experiencing shortness of breath after an emergency C-section. She recognized the symptoms and asked for a CT scan and blood thinner, but the medical staff didn’t take her seriously. Blood started pooling inside her, which eventually led to another emergency surgery. The delay could have cost her her life.

Q: Shouldn’t we be blaming a dysfunctional healthcare system instead of race?

A: There’s no doubt that physicians are under real-time pressures. They have 15 minutes to get their patients in and out. But one thing we know about bias is that when you’re under pressure, you’re more likely to default to stereotypes. It’s a mental shortcut.

We have a healthcare environment in which nobody has enough time. Doctors don’t like it. Patients don’t like it. Nobody is winning here. But if we accept that it’s deeply flawed, everyone should be at equal risk for the problems it presents. Everyone deserves the same chance to get the service whether it’s good or bad. And frankly, the United States absolutely has the capacity to do better. We just need the will.

Q: What do you recommend we do to remedy this?

A: If I could stop structural discrimination, I would win a Nobel Prize (laughs). But seriously, one way is to be honest about what is happening, and to train physicians and medical staff to see the patient who walks in the door not just as a collection of biological indicators and genes, but to understand the social environment that leads to poor health in the first place, and not to blame the patient for their health problems. Access to high-quality healthcare, free from discrimination, should be the baseline in the richest country in the world. Although we are a long way away from that, we must aspire to that ideal.