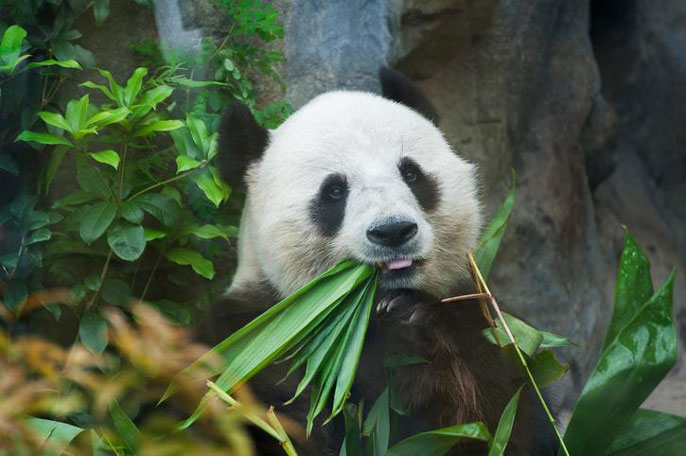 The distinct markings of giant pandas help them hide and communicate.

The scientists who uncovered why zebras have black-and-white stripes (to repel biting flies), took the coloration question to giant pandas in a study published this week in the journal Behavioral Ecology.

The study, a collaboration between the University of California, Davis, and California State University, Long Beach, determined that the giant panda’s distinct black-and-white markings have two functions: camouflage and communication.

“Understanding why the giant panda has such striking coloration has been a long-standing problem in biology that has been difficult to tackle because virtually no other mammal has this appearance, making analogies difficult,” said lead author Tim Caro, a professor in the UC Davis Department of Wildlife, Fish and Conservation Biology. “The breakthrough in the study was treating each part of the body as an independent area.”

This enabled the team to compare different regions of fur across the giant panda’s body to the dark and light coloring of 195 other carnivore species and 39 bear subspecies, to which it's related. Then they tried to match the darkness of these regions to various ecological and behavioral variables to determine their function.

Hiding in snow or forest

Through these comparisons, the study found that most of the panda — its face, neck, belly, rump — is white to help it hide in snowy habitats. The arms and legs are black, helping it to hide in shade.

The scientists suggest that this dual coloration stems from its poor diet of bamboo and inability to digest a broader variety of plants. This means pandas can never store enough fat to go dormant during the winter, as do some bears. So it has to be active year-round, traveling across long distances and habitat types that range from snowy mountains to tropical forests.

The markings on the panda's head, however, are not used to hide from predators, but rather to communicate. Dark ears may help convey a sense of ferocity, a warning to predators. Their dark eye patches may help them recognize each other or signal aggression toward panda competitors.

“This really was a Herculean effort by our team, finding and scoring thousands of images and scoring more than 10 areas per picture from over 20 possible colors,” said co-author Ted Stankowich, an assistant professor at CSU Long Beach. “Sometimes it takes hundreds of hours of hard work to answer what seems like the simplest of questions: Why is the panda black and white?”