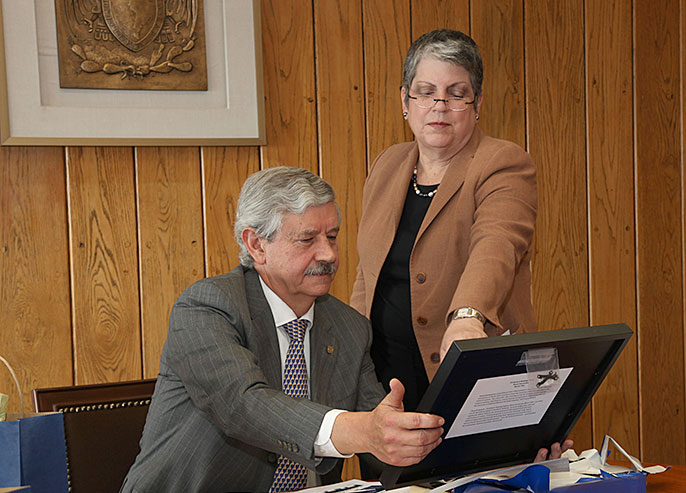 University of California President Janet Napolitano today (May 22) concluded two days of talks in Mexico City with Mexican government officials, academics, researchers and a broad group of students, UC alumni and others interested in bolstering bi-lateral cooperation through the newly announced UC-Mexico Initiative.

“This trip highlighted not only the unique shared interests of Mexico and the University of California, but also the full range of possibilities when we commit to working together,” Napolitano said. “I am excited by the new agreement we entered into this week and energized by the eagerness of so many institutions in Mexico to work with the UC to launch a new phase in our relationship.”

Among the accomplishments of the visit was the signing of a memorandum of understanding between UC and the Mexican National Council of Science and Technology, known as CONACYT, that extends their Agreement of Cooperation in Higher Education and Research.

The agreement, which notes the “long and successful history of collaboration, involving bi-national research and the training and exchange of graduate students, postdoctoral researchers, and faculty,” was signed Wednesday (May 21) by Napolitano and CONACYT Director General Enrique Cabrero Mendoza. It establishes a working group between CONACYT and UC MEXUS, a systemwide effort based at UC Riverside, to explore new and enhanced collaborative goals; and provides for development of a program for student, faculty and researcher exchanges between UC and Mexican universities and research centers.

Napolitano and UC Riverside Chancellor Kim Wilcox also met with Mexican Foreign Secretary José Antonio Meade, Secretary of Public Education Emilio Chuayffet, representatives of the National Autonomous University of Mexico and other Mexican research universities, as well as officials from the National Council for Culture and Arts, known as CONACULTA. Discussions included ways to work with Mexican institutions to exchange the “first 1,000” students between UC and Mexico, a proposal that stems from a pact last year in which President Obama and Mexican President Enrique Peña Nieto set a goal of exchanging 100,000 students by 2018.

Napolitano on Wednesday represented UC at the official launch of the Bilateral Forum for Higher Education, Research and Innovation, known as FOBESII, at an event at the Mexican Ministry of Foreign Affairs also attended by U.S. Secretary of State John Kerry.

Afterward, Kerry said Napolitano and other higher education leaders had come to Mexico “not just to talk, but to define between us a real agenda, a real set of objectives that will see more students from America study here in Mexico, and more Mexicans study in America, that will see us have more research and innovation projects where we create the jobs and the opportunities of the future. And I am convinced that this is the way that we’re going to strengthen our ties as well as, ultimately, our security and our economies.”

During a visit to UC’s Casa de California, in Mexico City’s Coyoacán district, Napolitano met with Sergio Alcocer, undersecretary of foreign affairs for North America and other foreign relations officials who have been instrumental in furthering the goals of the UC-Mexico initiative. Also on hand during a reception at Casa de California were students from UC´s Education Abroad Program as well as UC alumni.

The goal of the UC-Mexico Initiative is to create a sustained, strategic, and equal partnership with Mexico that addresses common issues and nurtures the next generation of leaders in both countries.