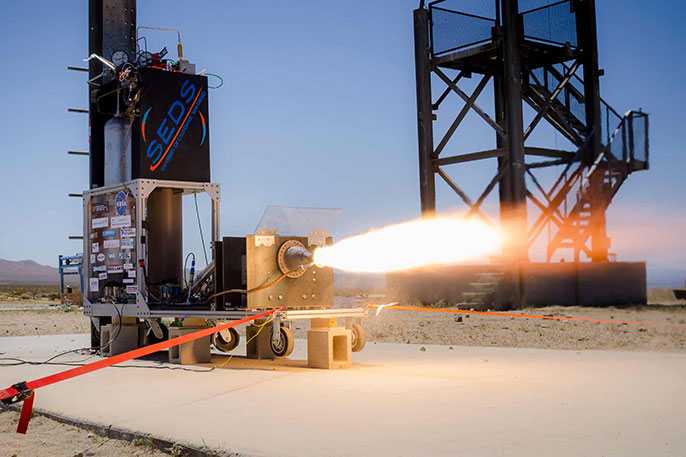 UC San Diego Chapter of Students for the Exploration and Development of Space were able to successfully test the latest version of their 3-D-printed rocket engine.

On a hot, dusty Friday evening in May, a caravan of five cars packed with UC San Diego students rolled onto FAR site in the Mojave Desert — a 10-acre property established by the Friends of Amateur Rocketry, Inc. to safely test and launch rockets. It took three tries, but the UC San Diego chapter of Students for the Exploration and Development of Space were able to successfully test the latest version of their 3-D-printed rocket engine.

Now that the engine is ready, the team will finish building the rocket it will power and take it to the Experimental Sounding Rocket Association's Intercollegiate Engineering Rocket Competition, June 25-27 in Green River, Utah.

“We’re going to break the world record for the longest flight of a 3-D-printed rocket engine,” said Darren Charrier, SEDS business manager and first-year engineering student at UC San Diego. “We’re aiming for our rocket to fly 10,000 feet in the air. We all watched the first record being set a few weekends ago — the first 3D-printed rocket engine went 60 feet in the air.”

The first world record was established by Bagaveev Corp., which subsequently donated $2,600 to the SEDS crowdfunding campaign.

The UC San Diego engine was sponsored by GPI Prototypes, a 3-D printing company in Chicago, which subsequently printed the engine. SEDS is also sponsored by NASA’s Marshal Flight Space Center, which helped to finance the fabrication of the test stand. Behind NASA, SEDS UCSD has a whole host of sponsors such as Lockheed Martin, XCOR, the Gordon Center, Gantner Instruments, and many more.

The students had been at FAR first in 2013 to test Tri-D, the team’s inaugural research project, and again a few months prior to test UC San Diego’s first 3-D-printed rocket engine, Vulcan-I. The initial test of Vulcan-I (called a hotfire) lasted only 5 seconds.

The students were present at FAR again in May to fire the engine for 15 seconds, which is the amount of time the engine will burn during the launch.

“The last stretch of the drive to FAR is the longest,” said Charrier. “The drive takes five hours, and even longer for those towing the test stand! The fact that so many students were willing to make the trip this close to finals week really shows how passionate they are.”

“We weren’t ready to test the engine until 1 p.m. on Saturday,” said Charrier. “Once the engine was cleaned and calibrated, we needed an ignition source. The igniter itself is a small amount of solid rocket fuel at the end of a stick, and it catches fire when introduced to an electrical charge. Unfortunately, the first test failed because of operational errors.”

Refilling the tanks takes approximately 2.5 hours. The second time the team tried it, the igniter simply didn’t work. While searching for the problem, they discovered that the pressures in their test system were too high. The third time was the charm for Vulcan-I, and at 6 p.m. Saturday evening, the team successfully fired the engine.

The engine is about 10 inches long and weighs about 10 lbs. It is designed to generate 750 lbs of thrust and is made of a high-grade alloy.