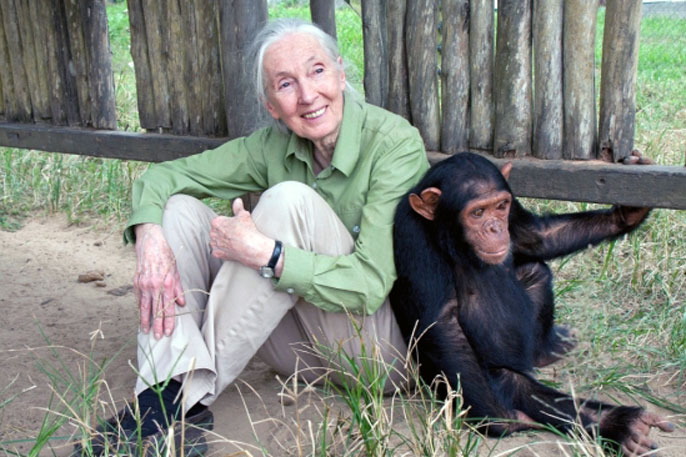 Environmental hero Jane Goodall is among the headliners in Arts & Lectures‘ “Forces of Nature” lecture and film series, which helps celebrate the 50th anniversary of the Environmental Studies Program.

When three million gallons of crude oil poured into the Santa Barbara Channel following the blowout of Union Oil’s Platform A in 1969, it represented the largest oil spill in U.S. waters.

The impact on marine life and on the ocean was catastrophic. But from that devastation sprung an academic initiative at UC Santa Barbara that helped launch the environmental movement as we know it.

That initiative was the campus’s environmental studies program, and to help celebrate its 50th anniversary, UC Santa Barbara Arts & Lectures is presenting “Forces of Nature: Activism, Education, Research & Solutions.” The series of talks and conversations features notable environmental leaders and thinkers who are exploring the many aspects of what it means to care for the planet and to understand our place in it. Several film screenings also are part of the series.

“We are pleased to partner with Arts & Lectures on this exciting lecture and film series,” said environmental studies professor and ecologist Carla D’Antonio. “During this 50th year of the Environmental Studies Program, we want not only to honor the work our 7000+ alumni are doing to improve the health of the planet, but also to empower our current students. We want to show them pathways to take this interdisciplinary education we are giving them and go out into the world and make a difference in whatever way makes sense to them.”

In the half-century since the start of the environmental movement and the environmental studies discipline, it has become clear that taking care of the Earth can take many forms. With this understanding, Arts & Lectures has brought together a diverse array of speakers with stellar credentials, including a climate scientist, a marine ecologist, an entrepreneur, an environmental justice advocate, journalists, authors and an environmental hero.

“The range of speakers really does reflect the multidisciplinary nature of Environmental Studies here at UC Santa Barbara,” said Roman Baratiak, Arts & Lectures’ associate director. “It was a founding principle of E.S. 50 years ago and continues to be the strength of the program today. By collaborating with campus departments like E.S. and the Bren School of Environmental Science & Management as well as a host of community environmental organizations, we have been able to greatly increase the impact and relevance of the ‘Forces of Nature’ series.”

On Saturday, Feb. 29, Bill McKibben, journalist and founder of the first planet-wide grassroots climate change movement 350.org, takes the stage in Campbell Hall to discuss the global reforms needed to mitigate the effects of climate change.

Journalist David Wallace-Wells will follow Thursday, Mar. 5. Wells’ best-selling book “The Uninhabitable Earth: Life After Warming,” explores the human side of climate change — how the trend will likely shape politics, culture and even our emotional lives. His talk will take place at the New Vic Theater.

Tuesday, March 31, beloved anthropologist, primatologist and environmental hero Jane Goodall, founder of the the Jane Goodall Institute and a United Nations Messenger of Peace, will inspire her audience from the stage of the Arlington Theater. She will discuss her revolutionary work with chimpanzees in Tanzania and explore what it means to take action on behalf of all living things and the planet we share.

Indigenous Environmental Network leader Kandi White will discuss the fight against climate change impacts and environmental injustice from the point of view of indigenous communities across North America Monday, April 13, at Campbell Hall.

To celebrate the 50th anniversary of Earth Day, renowned marine biologist and MacArthur Genius Jane Lubchenco will give her talk, “From a Rude Awakening to a Bold New Vision: The Path from a Disastrous Oil Spill to a Sustainable Future,” in Campbell Hall on Wednesday, April 22.

Yvon Chouinard, outdoorsman and founder of Patagonia follows on Sunday, April 26, with a moderated discussion on efforts to protect public land from entrenched industries and regressive politics at the Granada Theater.

A few days later on April 29, journalist Naomi Klein, author of “On Fire: The (Burning) Case for a Green New Deal” will speak at the Granada Theatre, advocating for a new approach to addressing climate change and economic inequality.

The lecture series concludes with a talk by Pulitzer Prize finalist Elizabeth Rush, author of “Rising: Dispatches from the New American Shore.” An exploration of how humans adapt to forces seemingly out of their control, the book also is the UC Santa Barbara Reads selection for 2020.

The Department of Environmental Studies is not the only program on campus to celebrate a major milestone this year. The Marine Science Institute and Coal Oil Point Reserve are also celebrating a half-century of research, and the National Center for Ecological Analysis and Synthesis turns 25.

“It is especially important to empower our young people because their future is at stake and it is easy to feel discouraged,” D’Antonio said. “This series of accomplished speakers will help to inspire us all to find solutions and keep fighting the good fight.”